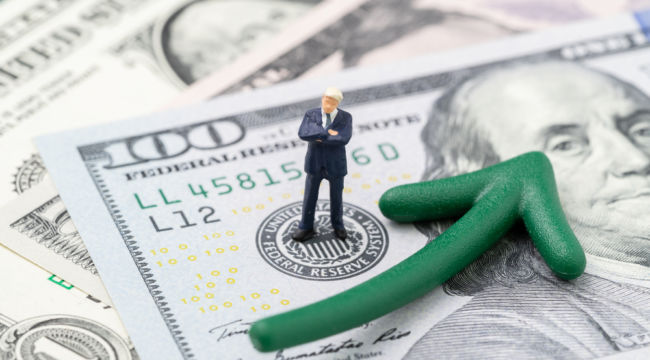 Paul Volcker: The Last of His Kind

One of the most important figures in the history of U.S. monetary policy, Paul Volcker, died Sunday at the age of 92.

Volcker is famous for having raised interest rates all the way to 20% in June 1981, the highest rates since the Civil War.

His actions are widely credited for ending the great inflation of the 1970s and setting the stage for the Reagan economy of the ’80s (although his sky-high rates nearly sank the economy at first).

Volcker didn’t kill inflation right away — it took another couple of years to finally end it, but rates were never that high again.

Volcker had a solid understanding of inflation and had opposed going off the gold standard in 1971.

He was one of the people in the room at Camp David when Nixon made the decision to close the gold window. He was actually one of the move’s primary strategists.

People assume Nixon and his team intended to permanently sever the dollar from gold. But it’s not true.

What Nixon actually said — and Paul Volcker confirmed this when I spoke to him — is that they didn’t think the U.S. was permanently going off the gold standard.

Nixon, and others involved with the decision, considered it a temporary suspension until the major global powers could get together, rewrite the system and get back to a gold standard at a much higher gold price (it was then pegged at $35/ounce).

Volcker understood that it was necessary to get the gold price right before a gold standard could resume. After all the money printing that went to fund Vietnam and the Great Society in the 1960s, he knew that a higher gold price was necessary.

In other words, Volcker knew the U.S. would have to avoid the mistake Winston Churchill made in 1925 as Great Britain’s chancellor of the Exchequer, the equivalent of the U.S. Treasury.

Churchill was determined to fix the gold price (measured in sterling) at the pre-WWI parity. He felt duty-bound to live up to the old value.

But he neglected all the money printing that occurred to pay for the war. A higher gold price was required to reflect the inflation that took place. Otherwise, setting the gold price too low would be extremely deflationary.

And that’s what happened. Churchill fixed gold at the pre-war value.

By failing to set gold at a higher price (again, measured in sterling), Churchill essentially cut the money supply in half. That threw the U.K. into a depression.

Going back to gold at a much higher price measured in sterling would have been the right way to do it. Choosing the wrong price was a contributor to the great depression.

So in 1971, Volcker realized that gold would have to be fixed at a higher price to reflect the money-printing that had taken place during the preceding years. Otherwise, it could have dire consequences.

Of course, the point was moot because the U.S. never did reopen the gold window. And the ’70s were certainly marked by inflation, not deflation.

Most people don’t know how close to hyperinflation the U.S. came by the late ’70s, and how close the world was to losing confidence in the dollar.

In 1977, the U.S. had to issue Treasury bonds denominated in Swiss francs because no one wanted dollars, at least at an interest rate that the Treasury was willing to pay.

They were called Carter bonds.

Not surprisingly, the economic morass of the late ’70s cost Carter reelection. Inflation was between 14% and 15% by the time Reagan was sworn in.

Many people forget that Carter appointed Volcker, not Reagan. He began raising rates right away, although they only rose to 20% under Reagan.

Volcker’s extreme interest rates helped send the economy into recession, first in mid-1980 and again in 1982.

Although Volcker had Reagan’s support, many voices in the Republican Party wanted him replaced by a more accommodating Fed chairman. So Volcker was not extremely popular at the time.

But he knew the dollar is ultimately backed by confidence, and he was determined to restore it.

Volcker did tame inflation, which was back down to about 3% in 1983 after peaking near 15% in 1980. The dollar strengthened, the economy recovered and one of the greatest bull markets in stock market history was underway.

So Paul Volcker remains one of the most important Fed chairmen ever.

May he rest in peace.