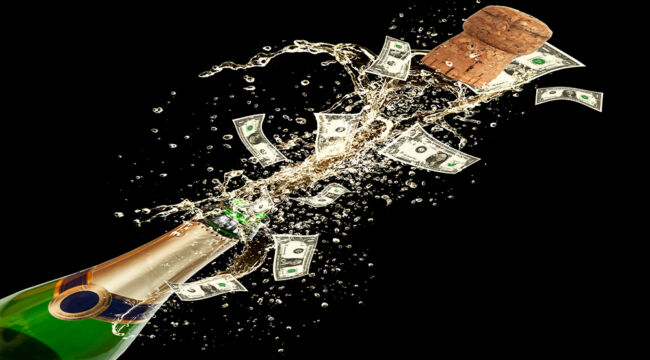 “Party Time Is Just Around the Corner”

“PARTY TIME is just around the corner”…

This is the conclusion of Money Week, the gleeful conclusion. Why is “party time” just around the corner?

Because the 2020s will roar as the 1920s roared… and the “deflationary fog” long overhanging the economy will finally scatter:

The key rationale for not just one good year, but an entire “Roaring ’20s”-style decade, is that this is the era when we finally throw off the deflationary fog that has hung over the global economy since the financial crisis, and enter a much more inflationary period.

Who… or what… will dispel the stubborn gloom?

The clearest marker of this new dawn came [last] week, as incoming U.S. president Joe Biden nominated Janet Yellen, who preceded Jerome Powell as head of the Federal Reserve, for the post of Treasury Secretary.

This nomination is “incredibly significant,” Money Week informs us — and for this reason:

That is incredibly significant. For about a decade now, central bankers have been complaining that they can only achieve so much with monetary policy. They need governments to help by directing the spending of all the money they have been printing. This complaint has only grown louder amid the economic damage wrought by lockdown. Now the former head of the world’s most powerful central bank will be running the fiscal policy of the world’s most important economy. Congress might be gridlocked, but it’s hard to believe that Yellen won’t have the clout to drive through at least moderately ambitious spending plans.

We are inclined to agree. It is difficult to believe spending will not increase.

She has therefore yelled for “extraordinary fiscal support” while the virus “is still seriously affecting the economy.”

We do not know when the virus will cease seriously affecting the economy. Yet we hazard that time is far distant.

Consider for example the restaurant industry…

Some 100,000 eateries nationwide — one in six — have “closed either permanently or long-term.”

That is $240 billion in sales lost permanently. It is gone.

Meantime, winter is stealing in. The virus rages and many of the nation’s wardens — its governors — will likely reimpose home arrest.

Many states will likely forbid indoor dining. Many of them do not enjoy the California climate.

Who will shiver over an outdoor dinner… as Mr. Jack Frost lacerates his cheeks … and the polar chill stings his lady’s hands?

Not enough patrons to keep a restaurant a going concern, in all likelihood — heat lamp or no heat lamp. Its profit margins are slender under optimal conditions.

Thus we have questions to ask:

How many more restaurants will shutter their doors this winter? How many will never reopen? How will their owners scratch along? Or the landlords of the properties no longer collecting rents? Or those to whom these landlords themselves are indebted? Or the restaurant staffs? Or the butchers, bakers and candlestick makers who will go without the waiter’s trade?

Rip a ligament — extending from the restaurant industry in this case — and the entire structure wobbles.

It is not a transient economic handicap. The patching requires time. It may not take at all.

We give but one example of a hobbled industry. There are others.

A recent USC study revealed the United States economy may hemorrhage up to $4.8 trillion over two years.

We therefore suspect Ms. Yellen will be extremely busy in the months and years to come… blowing wind… blowing money… blowing bubbles.

On what causes might she (and the administration) blow money? And what bubble could she help blow? Money Week:

Where will the money go? There are lots of ideas out there (politicians can be very creative with other people’s money) but the overarching theme across all corners of the globe is that of a “green” infrastructure boom. Unlike many forms of debt relief (which we may eventually get too), it’s uncontroversial – try opposing efforts to tackle climate change and see where it gets you – and so it’s the perfect excuse for governments to spend.

Yet rather than blame today’s false capitalism… she fingers an innocent bystander — capitalism itself:

There really is a new kind of recognition that you’ve got a society where capitalism is beginning to run amok and needs to be readjusted in order to make sure that what we’re doing is sustainable and the benefits of growth are widely shared in ways they haven’t been.

How might Ms. Yellen sandpaper the hard edges of “capitalism”… and distribute its bounties equitably?

We are not entirely certain — or partially certain. She is not Congress. She cannot authorize spending. Yet this we predict with confidence:

If she intends to lift the economy from its rut… she will botch the job.

The nation is already over $28 trillion in debt. That debt has jumped 400% in merely 12 years.

How much has national income increased over the same space? 30%.

That is, America has gotten a mighty buck. But it has gotten little bang from it.

“Advanced” nation debt crested 432% of GDP in the third quarter. The United States accounted for nearly half of it.

How an economy can expand under such a groaning debt burden, we do not know.

Yet with sufficient fiscal fireworks we suspect inflation will finally put in an appearance.

Our minions inform us that the price of industrial commodities — iron ore, copper, aluminum, etc. — is already on the jump.

This will bring its own problems – financial repression, the policy of holding interest rates below inflation, will squeeze a lot of portfolios. But in the meantime, growth will heat up, and assets that lost out in recent years will see their fortunes reverse… One beneficiary from a Roaring ’20s should be the commodities market. Put simply… demand is set to spike due to infrastructure spending.

We envision a return of a 1970s-style stagflation. That is, stagnating growth twinned with severe inflation.

But if they are correct… how precisely did the roaring 1920s conclude?