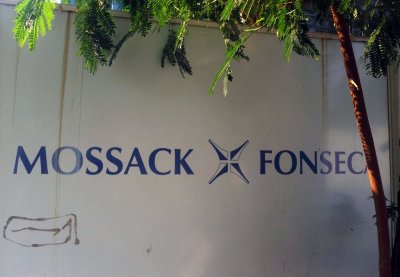 The Panama Papers and the Virtual Berlin Wall

We can’t prove it — not yet anyway — but we suspect the “Panama Papers” are the work of someone in the global power structure firing an intercontinental ballistic missile in the war on cash.

If you’re not up to speed yet, 11 million documents have been leaked from a Panamanian law firm called Mossack Fonseca — spilling the beans on offshore tax evasion worldwide from the 1970s up to the present day. The identity of the leaker, for now, is a secret.

The papers first landed in the hands of the German newspaper Süddeutsche Zeitung. Now they’re being analyzed by 109 media outlets in 76 countries.

They include the current prime minister of Iceland. The government of Australia has already launched an investigation into 800 of that country’s residents. In addition, “the documents demonstrate that as much as $2 billion has been shuffled through banks and offshore companies said to be linked to associates and friends of Vladimir Putin, the Russian president,” says the Financial Times.

Conspicuous by their absence from the initial reporting is a meaningful number of Americans. The most prominent so far is Marianna Olszewski. 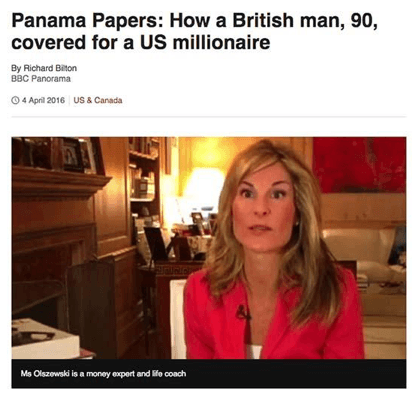 No, we’ve never heard of her either. Her claim to fame is a personal finance book called Live It, Love It, Earn It: A Woman’s Guide to Financial Freedom. We see used hardcover copies available on Amazon for a penny plus shipping. Perhaps it didn’t make an impact because it was published in late 2009 — when many women and men alike were more concerned with financial survival than financial freedom.

Olszewski’s fortune came not from being a “life coach” but from running a broker-dealer. During the Panic of 2008, she had $1.8 million of her personal funds tied up in a secret offshore company, and she wanted it back. But the bank wouldn’t release the money without knowing who was behind the offshore company.

She contacted Mossack Fonseca, which prompted the following email exchange…

Mossack Fonseca executive: “We may use a natural person who will act as the beneficial owner… and therefore his name will be disclosed to the bank. Since this is a very sensitive matter, fees are quite high.”

Olszewski: “I do think we should go ahead with the natural person however I want to have your promise that you… will handle this in the most sensitive manner.”

It did. The firm dug up a 90-year-old man from Great Britain to be the “natural person” and sign all the requisite paperwork. For this service, Olszewski agreed to pay $10,000 the first year and $7,500 each year after that — a substantial discount off the firm’s usual fee.

The editor of the German paper that first got the documents is promising more Americans will be exposed. We’ll see.

So what’s it to you if you don’t have the sort of substantial assets that you’d willingly pay $7,500 a year to hide from the tax man?

It comes back to a theme we’ve covered in these virtual pages since 2010 — the “virtual Berlin Wall” that’s gone up around Americans and their money, locking us up into the U.S. dollar and U.S. banks.

It’s nearly impossible for Americans to open a foreign bank account nowadays — the compliance requirements with IRS rules are so onerous that most foreign banks can’t be bothered. The rules have tightened gradually since the passage of the Foreign Account Tax Compliance Act of 2010 (FATCA).

Not coincidentally, the number of Americans giving up their U.S. citizenship has been setting records nearly every year since… 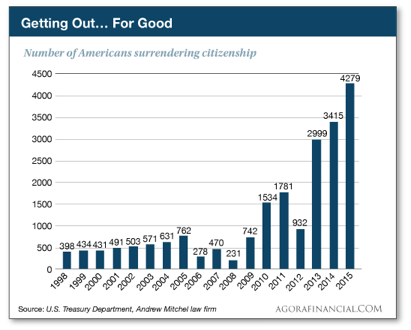 And as we’ve often documented, it’s not the uber-wealthy who dominate the ranks of those surrendering their U.S. passports. Even if they can open a foreign bank account, they can’t afford the average $2,000 of annual paperwork required to comply with IRS regulations on folks who live overseas.

From where we sit this morning, the Panama Papers aren’t about naming and shaming wealthy tax cheats: They’re about tightening the noose on everyone.

“The fallout from the massive data leak,” says the Financial Times, “will force Panama to give up the secrecy that has made it the ‘last, ultimate tax haven,’ according to the Paris-based OECD, which has been leading a global transparency drive.”

The OECD comprises most of the world’s developed countries and several large developing ones, like Mexico. It’s in the forefront of the war being waged against “drug dealers, money launderers and tax evaders.”

That’s the usual list of suspects whenever do-gooders start talking about why cash is such an awful thing and we should all submit to a new and glorious age of digital currency — the better with which every transaction can be tracked and government can slowly siphon off your wealth with negative interest rates.

The solution to all these problems — be it the war on cash or the war on financial privacy — is the same.

We cited a key passage a few days ago from Jim Rickards’ latest book, The New Case for Gold…

“The war on cash is mostly over, and the government won,” he writes. “But it’s not too late to get some gold, which maintains its worth as a physical store of wealth and is not affected by the digitization of other forms of money.”