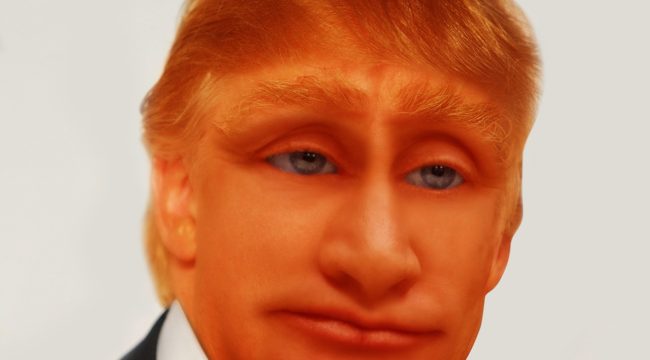 Orange Is the New Black (Swan)

Black swans are supposedly unexpected, stealthy and come of a sudden. But not this one — it is bright orange, and in your face day and night.

I refer to the Donald, of course, and the fact that he is truly the Great Disrupter.

He is not only impetuous, mercurial, undisciplined and unpredictable. But for reasons I will elaborate below, totally clueless about how to manage his presidency or cope with the circling long knives of the Deep State which are hell bent on removing him from office.

Accordingly, the single most important thing to know about the present risk environment is that it is extreme and unprecedented. In essence, the ruling elites and their mainstream media megaphones have arrogantly decided that the 2016 election was a correctable error.

And that makes the Donald the ultimate bull in an exceedingly fragile China shop — and an already badly wounded one at that.

So it is no understatement to suggest that the S&P 500 at 2440 is about as fragile as the “market” has ever been. Any pinprick could send it to a bubbly grave. It’s the mighty Orange Swan that will break the casino like never before.

The utter fragility of the latest and greatest Fed bubble could not be better represented than by this astounding fact:

Stated differently, in just the last 0.6% of the trading days since 1997, 65% of the ultra-low VIX readings have occurred. That’s complacency begging to be monkey-hammered.

The always astute Doug Kass said it best in his recent commentary:

Over history, as we have learned, a Minksy Moment develops when investor sentiment becomes complacent after long periods of prosperity and the data is ignored and doesn’t seem to matter anymore, as I wrote in “It’s a ‘Bohemian Rhapsody’ Market: Nothing Really Matters … to Investors.”

To this observer, the summer of 2017 feels similar to the important market highs of the first half of 2000 and the last half of 2007.

At the kind of bubble inflection points of which Kass speaks, the punters become not only stupidly complacent, but thoroughly delirious. Hockey sticks laid on the rising trajectory of stock prices go parabolic.

That was surely true in late 1999 and early 2000 when the NASDAQ 100 rose 30% in three months — just as has been recently when the FAAAM Five (Facebook, Apple, Amazon, Alphabet and Microsoft) gained 33% or $600 billion since the turn of the year.

But this time is actually different in a special sense.

In that sense, it is a generational high. The casino is infested not only with new-age snowflakes who have never seen a dip of more than 7%. But also complacent veterans of the entire era of bubble finance who have generated untold financial wealth by riding the bull from one bubble to the next, and now remain fearless with a vengeance.

Tuesday, MarketWatch featured one of these operators — the legendary money manager, Ron Baron.  He’s been at the game since the 1970s and has $23 billion of assets under management (AUM).

Baron said on CNBC that the bull is just getting started:

To say billionaire investor Ron Baron, who oversees some $23 billion in assets, waxed bullish on CNBC Tuesday morning would be an understatement, particularly with all the jitters and negativity swirling around the stock market lately.

The 74-year-old founder of Baron Capital said that interest rates and oil prices will stay low for “a very long time,” and that the economy will grow “much faster” than it would have otherwise, bringing the market along for the ride. Hence, he sees the Dow potentially taking out the 40,000 level by 2030.

So as Doug Kass observed, this really is a ‘Bohemian Rhapsody’ market where “nothing really matters” to the bullish punters who have spent a lifetime riding the Fed’s serial bubbles.

And that gets me to the Orange Swan…

There is no point in saying any longer that the giant Trump tax cut and pro-growth Stimulus is a pure pipe dream. That’s evident from the fact that the so-called GOP congressional majorities are so tied up in their own underwear that they can’t even pass Obamacare repeal and replace.

Moreover, the “help” they are getting from the White House needs no further explanation, either. That is to say, the  Donald just stepped all over his own parade by telling the Senate GOP that the House bill, which passed by a hair and is his only symbolic legislative achievement, is actually “mean” and needs a lot more money to remedy its defects.

You can’t make this up. You also don’t need any vote counting expertise in the House to know that if it comes back un-mean and pumped-up with more tax credits and Medicaid expansion money it will be shouted down by the Freedom Caucus. After all, they did say to the Senate, change one comma and the bill is dead in the water.

So much for handing off the Stimulus baton to fiscal policy.

Nor is there any chance that the desperate Keynesians running the Fed will turn their back any time soon on their current campaign to raise interest rates and shrink the Fed’s mountainous balance sheet.

And that’s not because they have suddenly grasped that free money for 100 months running is an exceedingly dangerous, combustible thing. It’s because they need to get interest rates back high enough so that they have ammo to combat the next recession!

In that context, here is what will take the Donald down, and it’s not some new smoking gun about RussiaGate. Instead, it’s actually the growing possibility that he will do the right thing when the Treasury runs out of cash around Labor Day, and there is no capacity to assemble a majority in both houses to raise the debt ceiling by trillions.

I’m referring to the dreaded “A” word. That is, use of the President’s constitutional authority to “allocate” the incoming revenue flows — which are running about $700 billion per year lower than outlays — to what he determines are the government’s highest priority purposes.

Undoubtedly, among these would be paying interest on the debt, sending-out the Social Security and veterans checks, paying military contractors and payrolls and the like.

Needless to say, resort to “allocation” would be the ultimate sin in the eyes of the bipartisan establishment. They would instantly start bellowing from every corner of the Swamp about an unconstitutional power grab by the White House.

And the mainstream media would go to DEFCON 1 about the alleged unlawful and dictatorial actions of a President who should never have been in the Oval Office in the first place.

So why do I think the Orange Swan might arrive in this fashion?

Here is what Trump’s completely inexperienced and unschooled Treasury Secretary said Tuesday. What he means by “super powers” is that he’s contemplating use of the allocation authorities.

This is not an issue, but I don’t want to leave any doubt that we have plans and backup plans,” said the former Goldman Sachs banker following a one-day bilateral meeting between the U.S. and Canada.

When asked what those backup plans would be, Mnuchin referred to them as “Treasury secretary’s “super powers.”

I say more power to him — even if it is the 50,000 pound pin that punctures the Great Bubble now at hand.

On the other hand, I’m quite confident there is only one other alternative — a prolonged government shutdown and a thundering breakdown of governance and all government function.

Either way, the bubble’s days are numbered. Dow 40,000 will soon join the ranks of the Tulip Bulb Mania and all the others which followed.