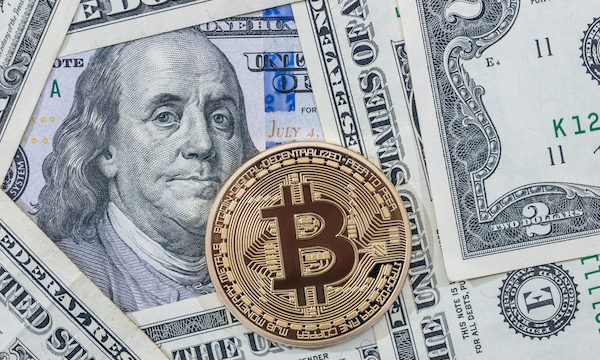 The Online Privacy “Hack” That Could Generate Millions in Profits

How the investing herd collectively feels about an individual stock is hands-down the hardest piece of market data to accurately measure.

For years, Wall Street has tried to nail down a way to profit from how the public views a specific investment. How can we know what the masses are going to invest in before they do it?

Fifteen years ago, we had no way of knowing what the public really believed about a company until after they invested in it — or didn’t.

That’s because a soaring or plunging share price was the only reliable indicator of what people thought of any given company, at any given time.

But that’s all changed now thanks to the power of the internet and social media.

Communication is in our DNA. And when it comes to investing, people brag about wins and grumble about losses. They seek validation for their belief that a particular stock is a good or bad play.

They report news and rumors about companies, their products and personnel. And very often, they ask others for opinions before they buy shares.

It’s all happening online, in public forums that millions of people follow obsessively.

As you can probably guess, this is an incredibly powerful force for shaping and revealing public opinion in our modern world. And when we focus on chatter about stocks, we can play those sentiment shifts for profit…

My computer is constantly gathering data. Thousands upon thousands of online interactions.

Don’t worry — I’m not up to anything fishy or illegal. My computer programs aren’t for selling contraband on the “dark web” or hacking into anyone’s bank account.

Instead, my algo is trolling the far corners of the internet to learn what countless investors think about investments.

Once I collect and process this powerful public sentiment data, my advanced computer system can lead us to the best “profit tapping” opportunities on the market.

Let me give you a snapshot of how that’s possible.

Check out this map: 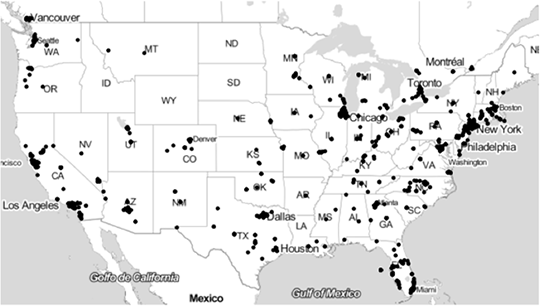 More than a million feeds I picked up during my concept validation testing tended to cluster around the major financial centers. And that stands to reason, since I’m tracking a diverse basket of stocks across multiple sectors.

In other words, since these test names have nothing in common, aside from simply being listed and tradable, it makes sense that the most info on this broad spectrum of companies would come from the places where the most stock trading tends to occur.

My new algorithm has the ability to collect vast amounts of data on these stock market interactions. I then filter and analyze that data in real time and detect currents of mass public sentiment that can generate incredibly accurate trading signals.

But it gets even better…

Right now, I’m building another layer of capability into my algorithm. Soon, my computers will also be able to prioritize the data by region.

What does that mean, exactly?

It means that I’ll be able to give more statistical weight to data from places that have produced more lucrative “profit tapping” signals in the past. It’s the most powerful data I’ve ever pulled from the markets.

And that’s just the beginning…

I’ve unlocked how to use this tech to “profit tap” select stocks for huge gain chances over and over again.

Early testing suggests that “profit tapping” stocks is over 100 times more lucrative than the S&P 500, on average.

Using “profit tapping” technology, you could make $1 million in gains in 2018. And $10 million total in the next five years.

I can’t reveal too much behind the proprietary technology in this space, but let’s take a closer look at “profit tapping”…

I can promise that you’ve never seen a chart like this before. Take a close look: 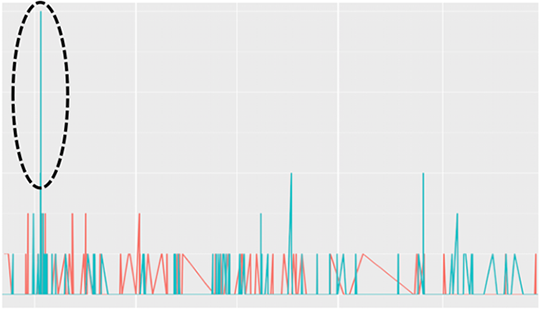 This data is the key to “profit tapping.”

Check out the data-spike I’ve circled. That’s a positive signal spike in blue (negative signals show up in red). In the testing phase, this spike triggered a buy signal in a popular tech stock that happened just before an incredible rally.

These signals can cluster, too. In fact, I’ve seen the overall net result of positive signal clusters post fast gains of 105% win over nine weeks… if you knew how to detect these signals.

Right now, I want to show you the best example in my data so far of just how closely stock price action can mirror these spikes.

Take a look at this chart… 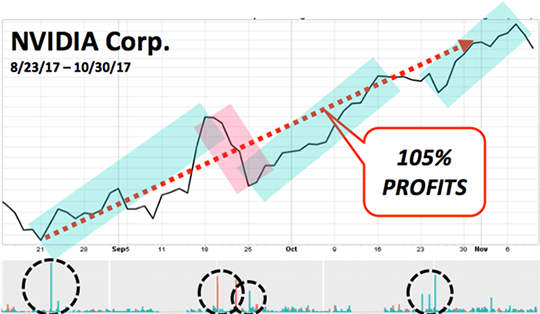 It’s a series of both positive and negative signals for AI superstar NVIDIA Corporation:

You can clearly see both the positive and negative spikes in this “profit tapping” indicator — and how accurately it can correspond to major price swings.

Let’s break it down…

We’ve got a big, obvious positive signal on August 23rd that kicks off a strong, sustained uptrend. Then we see several negative signals that knock shares down a bit in the September 20th – 24th range…

Then the stock recovers after a noticeable positive signal on September 25th. Then it gets a turbo-boost from another cluster of positive signals from the 23rd to the 26th of October.

As you can see, the overall net result of these mostly positive signals was a 105% win over nine weeks.

But you need to know how to detect these signals. And if you had the ability to trade them quickly, you could’ve played each of these four price moves individually — both up AND down — and made a series of very successful trades.

Yes, the social media universe is quickly morphing into one of the most powerful sentiment data sets we’ve ever seen. As the database grows, the potential trading power is almost immeasurable.

All that data is just sitting there — begging to be “hacked” for windfall profits.

They report news and rumors about companies, their products and personnel. And very often, they ask others for opinions before they buy shares.

The difference is that now, it’s all happening on social media, in public forums that millions of people follow obsessively.

This is an incredibly powerful force for shaping and revealing public opinion in our modern world. And when we focus on chatter about stocks, we can play those sentiment shifts for massive profits.

Once I collect and process this powerful public sentiment data, my advanced computer system can lead us to the best “profit tapping” opportunities on the market.

So, finally, after all these years, you can gain an edge on Wall Street and level the playing field with gains like:

That’s just for starters. When you see how easy, fast, and potentially lucrative “profit tapping” can be, you might never think of markets in the same way.

Like I said earlier, this “profit tapping” the market could make you $1 million in gains in 2018… and up to $10 million in the next five years.