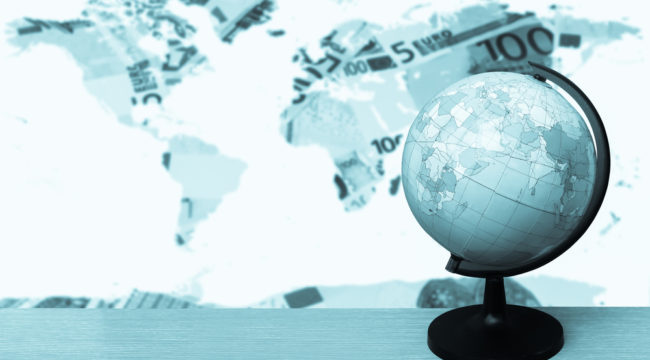 One Step Closer to the New World Order

Jim Rickards’ fellow panelists chuckled and guffawed when he talked about special drawing rights (SDRs) at a 2012 conference at the Milken Institute. They’re not laughing now…

China has long fussed that the SDR should replace the U.S. dollar as the world’s reserve currency.

And this month, it could become one step closer to reality…

For the uninitiated: The SDR is a sort of “super money,” or global reserve currency, issued by the IMF to circulate among central banks. It’s a basket of currencies comprising the dollar, euro, yen, pound and, as of last November, the Chinese renminbi (yuan). The renminbi won’t formally be included in the basket until Oct. 1 of this year. But SDRs are hardly new…

The IMF has issued SDRs on three separate occasions since their creation over 40 years ago. Each responded to a dollar crisis…

The first was after 1969. The U.S. was printing dollars by the bushel to finance the guns and butter for Vietnam and the Great Society. Foreign governments could still exchange dollars for gold in those days — and they did. They depleted the U.S. gold vaults. The IMF created the SDR in response, issuing over 9 billion SDRs through 1972.

In 1979, U.S. inflation soared past 14%. Oil-producing countries were alarmed that inflation was destroying the value of their dollar reserves. The IMF issued 12 billion SDRs through 1981.

The IMF then issued 182 billion SDRs during August and September of 2009, in response to the Panic of 2008.

And it’s fixin’ for an even greater role…

In 2011, the IMF released one of those obscure reports read only by a few eggheads read: Enhancing International Monetary Stability — A Role for the SDR? Its vision, according to Jim:

A multiyear, multistep plan to position the SDR as the leading global reserve asset. The study recommends increasing the SDR supply to make them liquid and more attractive to potential private-sector market participants… The IMF study recommends that the SDR bond market replicate the infrastructure of the U.S. Treasury market.

“If there were political willingness to do so,” the report states, SDRs “could constitute an embryo of global currency.”

Jim Rickards said that conclusion is “highly significant, because it is the first time the IMF has publicly moved beyond the idea of the SDR as a liquidity supplement and presented it as a leading form of world money… The IMF is poised to realize its one-world, one-bank, one-currency vision exercise its intended role as the central bank of the world.”

Now back to China…

According to the South China Morning Post, “Mainland media group Caixin reported that the World Bank planned to issue bonds denominated in special drawing rights in China as early as the end of this month. It said policy bank China Development Bank was also planning an SDR bond issue.”

The Nikkei Asian Review claims (as reported in Epoch Times) the total issue “will be between $300 and $800 million and some Japanese banks are interested in taking up a stake. According to Nikkei, some other Chinese banks are also planning to issue SDR bonds.”

This would be only the second platform of its type in the world. (The only current SDR trading platform is inside the IMF itself.)

A small step, really. And it’s not clear if a market for these issues will fully develop. But as the classic Confucian Tao Te Ching has it, a journey of 1,000 miles must begin with a single step…

“We support examination of the broader use of the SDR… and the potential issuance of SDR-denominated bonds, as a way to enhance resilience [of the financial system].”

Why should China defer to the IMF? It’s important to note that China doesn’t want to replace the dollar with the yuan, according to Jim Rickards. It just wants a “seat at the table.” And SDRs would give them that seat:

“The most important thing for you to understand is that China does not want to rock the boat — they want to join the club. This means the IMF’s special club of SDR members. The future world reserve currency is not the dollar or the yuan. It’s the SDR.”

Jim says you won’t hear much about SDRs until the next great financial crisis. The Fed used up all its powder to fight the last one. It’s all gone. Next time, it’ll be the IMF and its SDRs to the rescue:

Since Federal Reserve resources were barely able to prevent complete collapse in 2008, it should be expected that an even larger collapse will overwhelm the Fed’s balance sheet… The logic leads quickly from one world to one bank to one currency for the planet… The task of re-liquefying the world will fall to the IMF because the IMF will have the only clean balance sheet left among official institutions. The IMF will rise to the occasion with a towering issuance of SDRs, and this monetary operation will effectively end the dollar’s role as the leading reserve currency.

SDRs would be inflationary because the dollar would be devalued against them. Private citizens wouldn’t be able to own SDRs, so they wouldn’t make the connection. Jim again:

The genius of the scheme is that the SDRs would create inflation… but ordinary people wouldn’t know SDRs were causing it. Any inflation caused by massive SDR issuance would not be immediately apparent to citizens. The inflation would show up eventually at the gas pump or the grocery, but national central banks could deny responsibility with ease and point a finger at the IMF.

And so ends the dollar standard — not with a bang, but a whimper. And a truckload of inflation.