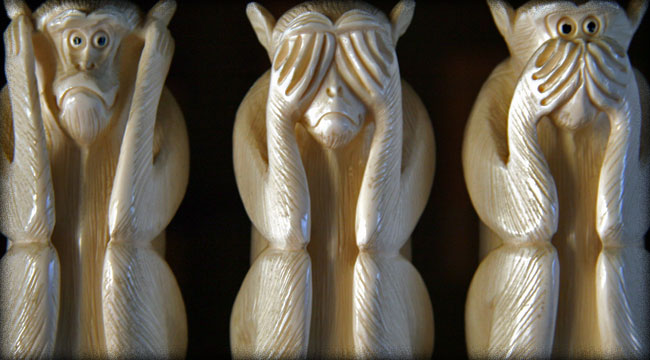 On the Value of Information

It has become tradition at La Estancia de Cafayate for Casey Research to host an intimate conference in conjunction with the Harvest Celebration. In the most recent of the series, Bill Bonner, co-founder of The Daily Reckoning, kicked the program off with a thought-provoking discussion about the nature of information.

With a nod to Nietzsche, Bill dissected the nature of information into two categories.

The first sort is that which is derived from direct observation. For an example, Bill pointed to the tangible information that comes from living in a tribal village. As a member of the tribe, you knew your neighbors, you knew what sort of crops would grow in the different seasons, where and when to hunt, etc.

Paraphrasing Bill, “If a member of the tribe came running into the village yelling that an enemy tribe was about to attack, you would have direct knowledge that there was an enemy tribe residing in the area and that the fellow doing the yelling wasn’t the sort to just make it up. So you could be certain an attack was likely.”

Given this high quality of information, Bill continued, you would be able to make an informed judgment about what action to take. You could, for instance, prepare to defend your village against the intruders, take flight, or remain and hope for the best. Regardless of how you acted, at least you knew you were acting on good information.

By contrast, there is the second type of information, that which Bill calls “public information.” This is the sort of information that people believe is “true,” but only tangentially and without having personally observed it. In other words, it is extremely poor-quality information, the sort of thing regularly ginned up in modern times by the media to attract eyeballs on advertisements, or promoted by politicians or businesses to further their own interests.

It’s Bill’s hypothesis that because the evolution of the human mind occurred against a backdrop of life-and-death decision-making based on hard information, our modern minds are genetically ill-equipped to deal with public information. In other words, we evolved trusting that the information we were receiving was reliable, leaving us susceptible to believing that substantially all the information we receive today is reliable.

Making the point, Bill referred back to the case of the villagers being alerted by a fellow villager to a pending attack. So alerted, the villagers knew all they needed to know in order to decide which of the aforementioned actions to take.

Because of the entirely understandable evolutionary precedent that we pay attention to hard information or risk being erased from the genetic pool, the human mind is essentially wired to accept that the threat from global warming is real… or that quantitative easing is needed. Or that Iraq somehow posed a threat requiring the spending of trillions of dollars and wasting untold lives to blow it to pieces.

How can we really know that any of this public information is true? We can’t. Yet with a sufficient amount of arm-waving in the global media, large swaths of the populace accept the information as true, setting in motion a giant snowball of political policy and the attendant massive misallocation of resources.

As a related aside, during the two-day break between the events, Doug and Ancha Casey, John Mauldin, and I made the trip to Bill Bonner’s estancia — a fairly grueling four-and-a-half-hour drive on bad roads (and in some parts, no roads at all) into the mountains above Cafayate.

Like many of Bill’s friends, I was never quite sure why anyone would want a home on a property that is a seven-hour drive from the nearest commercial airport, and most of the drive on washboard roads. But when you get there, you understand. The estancia encompasses a massive and surprisingly verdant valley — I think on the order of 200,000 hectares — a veritable Shangri-La stretching as far as the eye can see.

Now, Bill is a pretty well-off guy, but unlike many people who have amassed considerable wealth, Bill generally shuns the superficial trappings in favor of simple pleasures and in undertaking hands-on projects that are anything but simple. For instance, along with his sons and a couple of gauchos, he designed and built a small villa with three vaulted ceilings, using methods perfected by the Romans (he got the basic idea from a book on Roman architecture).

Very impressive, but more to the point, over the course of his life and his many studies, Bill has become a skeptic about much and maybe most of what he hears in the media, or that spews forth from the mouths of the politicians. Instead, he has developed a Missouri-like attitude of needing to observe something himself before believing it.

The important idea that Bill shared and that I am trying to share, is that if you take the time to step back and analyze the information you receive and parse it into that which you know to be true based on your own observations, as opposed to what is popularly accepted as true simply because it was printed in a news journal or said in a broadcast, your attitude about many things may change.

It may take some time and practice to hone your skills in separating discernible facts from public information that may actually be utter fiction… but the payoff in adopting this attitude can be significant.

In addition to saving yourself time and worries by mostly ignoring public information, learning to discern the difference between the two can lead to better decision making, in your everyday life and in your investments.

As a case in point, during the conference here, someone in the audience asked a question about quantitative easing. Doug Casey took hold of the microphone and replied along the lines of, “People need to stop using constructs such as ‘quantitative easing.’ Those are just terms that politicians have come up with to obfuscate the truth. The proper term for quantitative easing is currency debasement, plain and simple.”

Jumping back to public information, “everyone” knows that the dollar is king…the best car in the junkyard, the two-ply toilet paper in a world where all other currencies are mere single ply. But is that accepted truth actually true?

Take a look at the following two charts, taken from the presentation that Frank Trotter, president of EverBank Direct, gave in Cafayate. The first shows the US dollar against 19 major currencies. It’s hard not to note that the mighty dollar has been in a long-term downtrend. 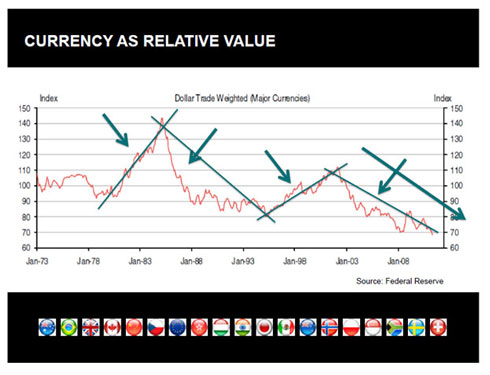 The second of Frank’s charts shows the one- and ten-year performance — through 2012 — of some of the EverBank World Currency team’s favorite currencies against the dollar. 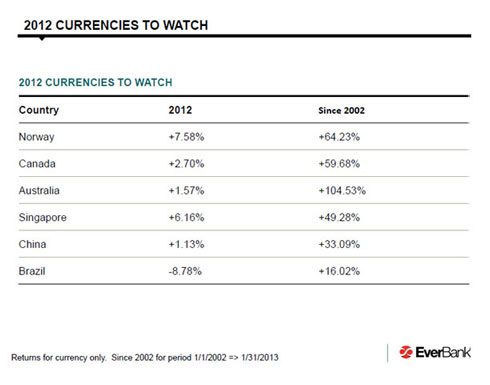 I want to toss out one more item of observable information as it relates to today’s economy, political environment, and the outlook for the dollar.

The chart here is of federal spending in trillions of inflation-adjusted dollars. That means that the increase in spending shown accurately reflects the growth in government in real terms (as opposed to reflecting the decline in purchasing power from the currency debasement). 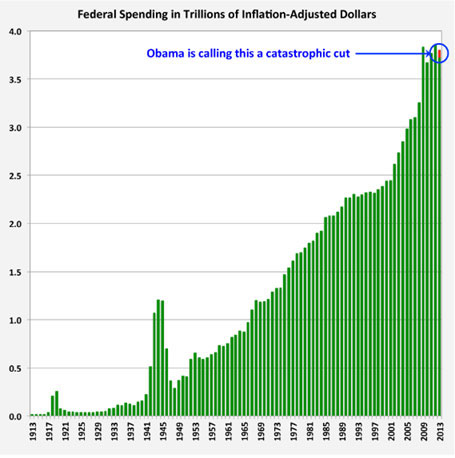 It also shows the scale of the purportedly draconian cuts in federal spending to be made as part of proposed austerity measures… revealing all the hand-wringing about the severe consequences of said cuts as just so much public information… or, if you prefer, misinformation.

Better to cling to the facts you know, rather than the “facts” that circulate in the public domain.

David Galland,
for The Daily Reckoning

David Galland is Managing Director of Casey Research. Over the course of his career he has worked on the Gold Newsletter, the Aden Analysis, Wealth Magazine and Outstanding Investments. He currently serves as Managing Editor for Doug Casey’s International Speculator, Casey Investment Alert, and What We Now Know and was a founding partner and Executive Vice President of EverBank.