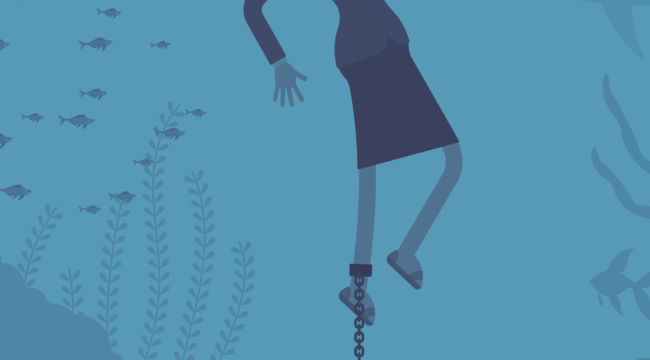 Today a wave of sorrow washes over us. And we drop a mournful tear upon the ashes of the American Republic.

For the American people are barreling down Hayek’s road to serfdom — at breakneck speed.

That is, they hauled in more money than they laid out.

Meantime, the United States Office of Mismanagement and Budget now informs us that:

Federal transfer spending — spending that transfers money to those who did not earn it — is projected to scale a record $3.22 trillion this fiscal year 2020.

These payments will likely account for 68% of all federal shellouts this fiscal year. And they will further gobble 14.4% of the gross domestic product.

Take the year 1940 as a parallel. Uncle Samuel dedicated a mere 2.1% of GDP to these payments.

Never before have Americans been given so much… for producing so little.

In these our days, some 50% of all Americans receive at least one federal benefit.

As Lance Roberts of Real Investment Advice reminds us, with a pearl of sorrow coursing down his cheek…

Only during the locust years of the Great Depression — from 1931–36  — did government income support exceeded taxes paid, as they do now.

Meantime, not a single one of these past 11 years exceeded 3% growth.

Thus we arrive at this sad conclusion:

But comes your objection:

“Wait one minute. My taxes pay for Social Security, Medicare and Medicaid. How can you call those transfer payments when I in fact pay for them?”

The Math Is the Math

These programs qualify as transfer payments under United States accounting rules. And consider this fact:

Many American households drain more money out of these programs than they pour in.

A 2012 report from the Urban Institute — for example — concluded thusly, as summarized by Politifact:

And the average American of vintage years receives $3 in Medicare benefits for each dollar contributed.

The arithmetic somewhat reverses with Social Security. Many Americans will have paid in more than they will drag out.

But when all comes to all, it must be recognized:

Tax flows coming in the front door do not equal transfer payments going out the back.

All this at a time when the economy is expanding — sluggishly — but expanding.

As notes the aforesaid Mr. Roberts:

“Americans should be earning a bulk of the income from their labor, rather than from government handouts.”

What Happens to Spending During Recession?

So this question: If Americans require record amounts of government support in an expanding economy…

What happens come the inevitable recession?

That is, in the recession when the tax stream runs dry… and the demand for “social spending” swells to extravagant dimensions?

The answer, in three words, is greater government spending.

The answer — in three additional words — is obscene government deficits.

When recession is finally upon us — depend on it — the spending floodgates will open.

And today’s trillion-dollar deficits will trifle in comparison.

Annual deficits will likely surge to $2 trillion… or $3 trillion.

As is, the Congressional Budget Office (CBO) projects a national debt of $28.7 trillion by 2029.

That figure will likely represent 93% of GDP — the highest since shortly after WWII.

But now assume $2–3 trillion deficits. The national debt could well approach $40 trillion by 2029.

For some slight perspective…

Interest payments in this second scenario would swamp the entire federal budget.

At that point the lovely illusion that deficits do not matter will crash against hard rocks of mathematical fact.

We the People Must Look Ourselves in the Mirror

As we have asked before:

Were the American people humbugged into so much debt? Or have we freely and knowingly put our names to the contract?

1) The elected officials of the United States are colossal rogues who amassed today’s $22.6 trillion debt in full defiance of the thrifty American voter.

2) The $22.6 trillion debt reflects faithfully the desires of the American voter. He has gotten what he wants. At the very least, he accepts it in exchange for the perceived benefits it showers upon him.

Option 2 stands in full indictment of them.

What does our government say about us?

As explained above, half the country collars more in government transfer payments than it pays in taxes.

Is this the model of civic virtue?

If doing for our country, it is a strange sacrifice indeed.

What does it mean for the future of our beloved American Republic?

Representative democracy cannot subsist if a great part of the voters are on the government payroll. If the members of parliament no longer consider themselves mandatories of the taxpayers but deputies of those receiving salaries, wages, subsidies, doles, and other benefits from the Treasury, democracy is done for.

We the People will occasionally dispatch a Ron Paul to Washington, it is true.

But for every Ron Paul, we install two dozen spendthrifts… six dozen profligates… a hundred wastrels.

“We simply have to elect better people — that is the answer. We deserve better. But the entire system is corrupt. We must work to change it.”

Here we have the immemorial cry of the true believer, the babe in the woods.

And it will likely remain the immemorial cry of the true believer, the babe in the woods — until the end of the chapter.

“Democracy is the theory that the common people know what they want,” said the inimitable H.L. Mencken, “and deserve to get it good and hard.”

Here is our suspicion:

One day, soon or late, we will all be getting it — good and hard.