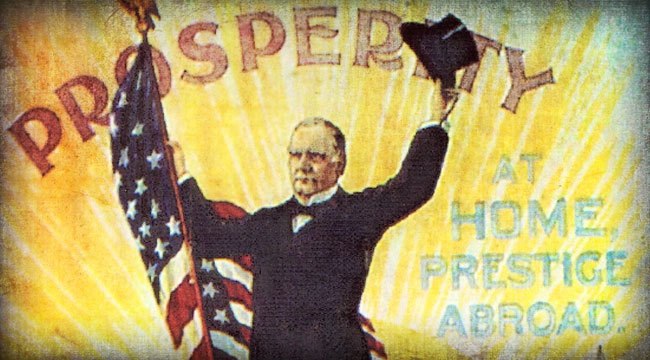 “On the Importance of Sound Money”

When I first went to work for the Nixon administration, I told my mom, “Mom, you can’t believe it. I just wrote a speech for Nixon and he used every single word. Well, he did make two little changes. Everywhere I had ‘is’ he put ‘is not,’ and everywhere I had ‘is not’ he put ‘is,’ but other than that, Mom, it’s exactly my speech.”

Nixon did all sorts of things wrong: the import surcharge, the wage and price controls, the huge increase in social spending, the doubling of the capital gains tax rate. But to my way of thinking, Nixon’s biggest problem was going off gold.

I am a strong advocate of sound money. I believe that it’s basically the Fed’s responsibility to guarantee the value of the dollar, to make sure we don’t have inflation. Nixon wanted us to go off the gold, which led to the high interest rates and hyperinflation of the ’70s and very early ’80s. In fact, it really was a global phenomenon.

There was one person whose side I was on. Paul Volcker and I worked on going off gold — that was our task — but both of us shared a view that we needed to keep on the gold standard to provide discipline to the monetary authorities. And unfortunately, we lost the battle. They went off gold and you can see the consequences: the devaluation of the dollar back in the early 1970s. But when Volcker came back in later as Fed chairman, it was just spectacular what he did. He and Ronald Reagan were the two instruments of the prosperity of the ’80s.

In the 1970s, we had all sorts of economic problems. Inflation was rising. We had a weakening of the dollar through Johnson and Nixon. Even before Johnson, we had a weakening with Kennedy. There were all sorts of restrictions on trade. You may remember that Kennedy had a problem with France on the dollar, and then, when Johnson came in, he too had them. We had the Buy America program, the interest equalization tax and the voluntary foreign credit restraint program, all of these things aimed at improving the trade balance, the capital balance of the U.S. And throughout this whole period, we had reduced our reserves of gold and we really had not used gold as the discipline that it should have been. That’s with the Bretton Woods agreement.

When we came into the 1970s with Richard Nixon, I was very involved — as you may know, I was the first chief economist at the Office of Management and Budget when it was formed. In fact, I joined the government in October 1970. I was George Schultz’s right-hand person back then, his economist. My first job was a trip to China. I was in charge of mainland China for the White House, which, for a kid my age (I was 29, maybe 30), was pretty cool.

At that time, we wanted to devalue the dollar and the French did not. John Connolly was our union representative, and he was discussing this with Giscard d’Estaing, and Giscard d’Estaing was trying to explain to Connolly why they really could not allow the U.S. to devalue the dollar. This was just before the Smithsonian Agreement. He said, “Mr. Connolly, I don’t know if you understand the program from the standpoint of France, but you see, sir, we hold the dollars in reserves and, therefore, if we allow you to devalue the dollar against the French franc, we will suffer the capital loss on the reserves in France. That is what will happen.”

And with that, Connolly took his unlit cigar, swirled it in his mouth, put his foot up on the table with his boots on, pointed that cigar at Giscard and said, “Well, hell, Giscard, we have more dollars than you do.” And of course, everyone burst out laughing.

But going off gold and devaluing the dollar was a very big mistake. It caused a decade of hyperinflation, high interest rates and the collapse of the world economy. We raised tax rates dramatically under Nixon and we devalued the dollar. We caused this hyperinflation. It was a double whammy, and it led to one of the worst 15- or 16-year time periods in the U.S.

In 16½ years, the nominal value of America’s stock market fell by 20%, and that doesn’t count the trebling of the price level during that period. The average annual real rate of return from February 1966 to August ’82 on the Dow was negative 8% per annum compounded annually. That bear market was caused by Nixon’s devaluation of the dollar and by high taxes and restrictions on trade.

In the ’80s, we reversed those policies. Paul Volcker brought us back to sound money. Ronald Reagan gave us tax rate reductions, and we had a prosperity that had not been seen on planet Earth for a long, long time. We cut tax rates, we had sound money, we had free trade and we had minimal regulations. All the four grand kingdoms of macroeconomics were put in the right place.

We’ve had a tremendous prosperity. I’m going to say it here, and I say it seriously: If they reverse those policies, if these tax increasers try to raise taxes on the rich and have unbridled monetary expansion, or if they try to restrict imports or stop illegal immigration or try to reregulate the economy, believe me that the film will play backward. You’re going to get a mini-1960s/’70s period again. It’s a catastrophe that they’re proposing.

Arthur Laffer
for The Daily Reckoning

Ed. Note: This essay was featured prominently in The Daily Reckoning email edition, which offers a detailed, often irreverent view of the markets at large every day to over 300,000 subscribers. If you’re not receiving The Daily Reckoning by email, you’re missing out on at least two-thirds of our best analysis and commentary. Sign up today, for free, right here.

Arthur Betz Laffer is an American economist who first gained prominence during the Reagan administration as a member of Reagan’s Economic Policy Advisory Board. Laffer is best known for the Laffer curve, an illustration of the theory that there exists some tax rate between 0% and 100% that will result in maximum tax revenue for governments. He is the author and co-author of many books and newspaper articles, including Supply Side Economics: Financial Decision-Making for the 80s. Laffer is also Policy Co-Chairman of the Free Enterprise Fund.