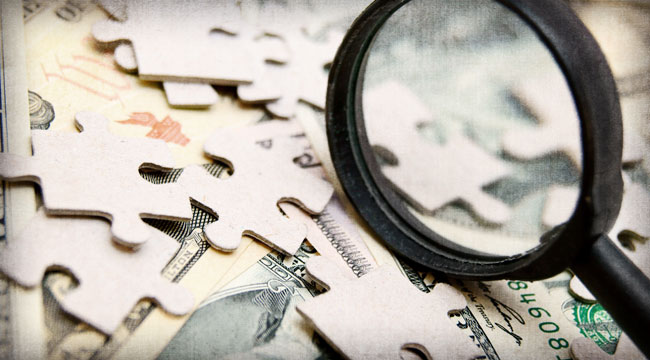 On a Manhunt for Newly Created Currency

My poor back was aching from playing golf, I was bored with TV, and, in desperation for something to do other than taking an interest in the kids, doing some desperately-needed chores around the house, or even faking the slightest interest in ANY of that crap, I was casually looking at, you know, economic stuff.

As usual, I was registering the usual shock and awe (we’re freaking doomed!) at such continuing monetary and fiscal insanity, such as Total Fed Credit increasing another hefty $35.4 billion last week, with the Fed itself buying up $36.9 billion in US government securities, committing yet another blatant, brazen fraud in a long series of Quantitative Easing frauds to monetize government debt to the tune of, according to these new figures, an annualized $1.84 trillion a freaking year, for which the Federal Reserve creates $1.820 trillion out of thin freaking air! In case you missed it at the beginning of this paragraph, we’re freaking doomed!

Interestingly, comically segueing from “freaked out” to “interestingly,” Currency in Circulation, namely dollar bills and coins, went up $ 9.6 billion last week, which is $31 in cash for every man, woman and child in America. In one week!

In fact, in looking at the figures, Currency in Circulation is up $72.5 billion in the last year, which is enough NEW cash floating around for EACH of the abovementioned men, women and children in the country to get $234!

Personally being a man, woman or child in America, imagine my disgruntlement and dismay when I impatiently waited until my wife finally went into the kitchen, and then sneaked a look into her purse so that I could claim MY personal $234. I figured maybe I could sneak out to go have a few refreshing brewskis and, you know, maybe see who and what’s new in the marvelous, magical world of pole-dancing, only to find her purse empty!

And so I casually and politely asked her about it (“Hey! You in the kitchen! Where’s my damned 234 dollars?”), emphasizing how she had better cough it up because I had plans for that cash, and I mean BIG plans, but she insisted SHE didn’t have hers, either! I’m investigating.

Meanwhile, swerving back, tires squealing, to the topic at hand, the Monetary Base itself just jumped up $82 billion to $3.839 trillion from $3.757 trillion and (according to Barron’s) is up an astounding $2.841 trillion in the last year!

So, hey! You! You wanna talk about inflation in the money supply that always leads to inflation in consumer prices? No? You say you’ve heard it all from me so many, many times before, and you are so damned bored with hearing about it that you are deliberately NOT reading this?

Well, if you are out blithely gallivanting around, instead of reading this Mogambo Dire Warning (MDW) because of your petty, spiteful nature, then OK! Fine with me!

The cruel part of me is glad — GLAD, do you hear me? — that you are not going to let me tell you, for the thousandth time, how you should be buying gold, silver and oil right now, which you still wouldn’t do, which means you are going to lose out on fabulous capital gains when their prices explode, thanks to the monetary idiocy of the evil Federal Reserve and the other dirtbag central banks around the world creating so much excess cash and credit.

As a result, you will spend the rest of your life in pitiful poverty, mired in misery, eating weed salads and bug burgers to survive, perhaps watching me drive by in my big, shiny new car, stereo blasting, fancy hubcaps glinting in the sunlight. Perhaps, too, you will hear me laugh at you, “Hahaha! Now who’s too busy to read a MDW? Hahaha!”

And since you are still ignoring me, you won’t hear the chilling news that the evil government cabal that calls itself the G-20 is proposing to “stimulus spend” $2 trillion in the next year, or that the Obama 2015 federal budget proposal is an astounding $3.9 trillion! Yikes!

Sadly, the Butt Ugly Truth (TBUT) is that this monetary and fiscal insanity is to desperately try and save the banks for a little while longer, as the banks have lent out, and borrowed for themselves with which to speculate, all the depositors’ money, dozens of times over.

So, sadly, all your money in a bank is, actually, gone, according to the accounting ledgers at the banks, and the only way to get it back is if all those borrowers who borrowed money paid back the money they borrowed, which they can’t do, because they don’t have the money to pay back the money.

But not paying back the money they borrowed is paradoxically a good thing, because everybody selling assets to raise cash to pay off debt is what makes the money supply go down, asset prices go down, things collapse, bankruptcy all around, and everybody is grumpy at being devastated.

And probably a LOT sooner than expected, too, since so many assets are leveraged so unbelievably highly that any significant move downward in prices would quickly overwhelm all the investor’s capital, immediately bankrupting the deal and handing their creditors a big loss, who are, ultimately, the banks, which causes a fall in the money supply. Yikes again!

Perhaps fortunately, in light of the above, not only are consumers NOT paying back the money they owe, but they are borrowing more! Consumer Installment Debt was up almost $20 billion in December, rising to $3.106 trillion, which seems staggering because of it being up almost $327 billion (almost 12 percent!) in the past year, or, perhaps more meaningfully, $3,114 more debt for every one of America’s 105 million credit-card holders, and coming, as it does, at a terrible time when interest rates are rising, prices are rising, but incomes are falling.

It is usually at this point where I find that you WERE actually reading this Mogambo Dire Warning (MDW), you wily devil, betraying yourself with your pent-up verbal assault at me to “Shut the hell up, Mogambo! Just shut up, shut up, shut up!”, which I deftly party and riposte with the powerful, “If you are NOT buying gold, silver and oil with everything you have, then you are making a huge, huge, HUGE mistake!”

And then, in keeping with the sudden fencing theme, I end the refrain “thrusting home” like Cyrano de Bergerac, saying with all the deadly contempt and venom I can muster, “Moron!”

Beyond that powerful closing scene, starring me as Cyrano, the handsome and brave master swordsman and lyrical wordsmith, there is nothing to add: You know what to do and why you must do it.

Truthfully, the Cyrano de Bergerac reference is a bit of spontaneous whimsy that I just threw in, I don’t know why. Perhaps we’ll never know why. Or even care why.

But we know why to buy gold, silver and oil, and that’s the important thing. And the fact that it is spectacularly easy, too, only makes it more and more blindingly obvious that, “Whee! This investing stuff is easy!”

Ed. Note: The Mogambo’s sage wisdom has been a fixture in The Daily Reckoning for several years. And after a brief hiatus, he is back to his old tricks. To make sure you’re clue in to his most recent musings, sign up for The Daily Reckoning, for FREE, right here.