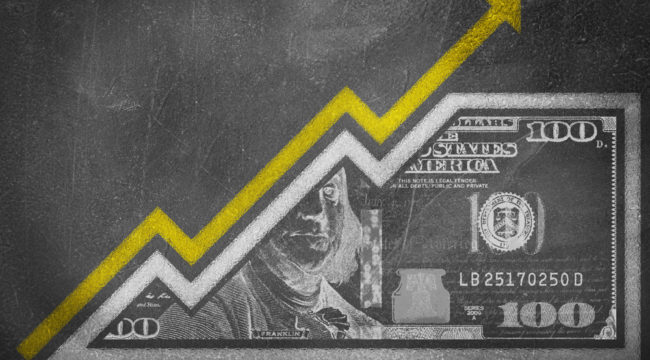 An Omen of Approaching Inflation

Disinflation has Janet Yellen by the snout.

Many expect September’s numbers to deepen the grip… and October’s too.

Following the 2008 financial crisis, the Fed ran the printing presses 24 hours of the 24, seven days of the seven.

It’s not enough that the Fed prints money. That money must enter the economy through the banking system.

Money supply does not cause inflation. It may add fuel to a fire, but it’s not the spark. The Fed has created $3.5 trillion of new money since 2008 and there’s no inflation in sight. What causes inflation is not money supply but psychology expressed as velocity. Velocity is the speed at which money turns over through lending and spending.

We noted the lack of consumer inflation above with this year’s personal consumption expenditure index (PCE), for example.

And its most recent reading suggests that inflation, long dormant, could finally be finding its legs…

We speak of a creature called the Manufacturing Purchasing Managers’ Index (PMI) report.

It tracks the basic ingredients that constitute the national economic pie.

And September’s PMI numbers indicated manufacturing increased at its fastest pace in 13 years, defying all expectations.

In all, 17 of 18 tracked industries expanded.

This highlights the higher prices manufacturers are paying for raw materials, which suggests inflationary pressures are building at the lower end of the value chain.

Renaissance Research, an independent market analyst, says the PMI is “traditionally viewed as a good indicator of business sentiment regarding future inflation.”

If the PMI numbers rise, inflation tends to follow.

Over the past 20 years, there has been a very strong positive correlation between the [PMI] and the Consumer Price Inflation (CPI) Index. Notably, the ISM Prices Paid Index has been a reliable leading indicator of the CPI data so far.

Here, in graphic form, the overall match between PMI and CPI: 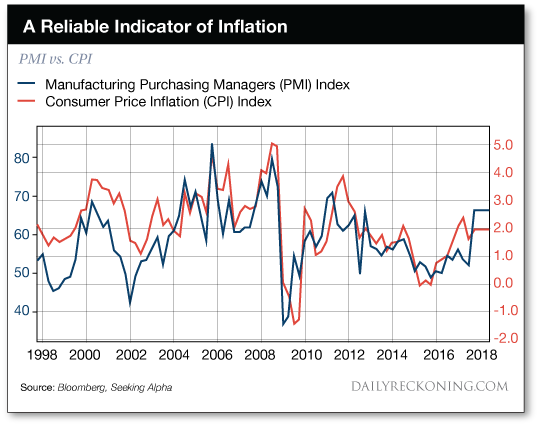 We hazard that Janet Yellen would envy this PMI’s forecasting power.

It certainly excels her own… as do tarot cards, tea leaves and balls of crystal.

They recorded the largest increase in eight months.

In fairness, rising gasoline costs did much of the lifting due to hurricane-related refinery closures.

But are there seeds of inflation in the wind?

Specifically, are the rising PMI numbers a guarantee of looming inflation?

No, not by themselves.

As is so often the case, statistics can be lovely liars.

Even if inflationary pressures are building for manufacturers, there’s no certainty they will pass these onto the consumer, or if consumers would be willing to pay higher prices if they did.

We can’t say if the latest PMI report indicates inflation ahead.

But as Jim Rickards has argued, inflation and deflation are warring forces at each other’s throats.

Jim agrees that deflation is winning the war right now.

But he also believes the economy can switch from deflation to inflation as fast as lightning:

The relative price stability you’re experiencing now is an artifact of deflation and inflation acting at the same time. Far from price stability, what you’re seeing is an extremely unstable situation. Think of the forces of deflation and inflation as two teams battling in a tug of war. Eventually, one side wins, but the battle can go on for a long time before one team wears out the other side.

If central banks stop causing inflation, deflation will quickly overwhelm the economy. If central banks don’t give up and keep printing money to stop deflation, they will eventually get more inflation than they expect.

The outcome of this war hangs in balance.

That’s why Jim says today’s market represents “the most challenging one you have ever faced.”

Besides every other market you’ve ever faced, we might add.