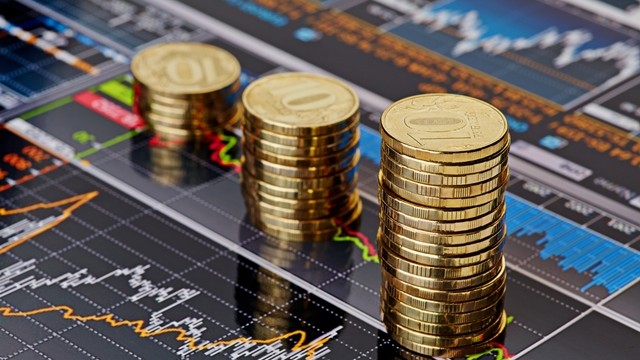 MELBOURNE — You know that interest rate rise the US Fed has been talking about for the past five years? Well, it might not be as imminent as you think.

The general consensus was that the Fed would raise official interest rates at its next meeting in September. But minutes just released from the July meeting indicate the Fed isn’t so sure.

After talking about the need to see labour market strength as a precursor to a rate rise, the narrative has now shifted to the outlook for inflation.

From the Fed minutes:

‘The Committee agreed to continue to monitor inflation developments closely, with almost all members indicating that they would need to see more evidence that economic growth was sufficiently strong and labor markets conditions had firmed enough for them to feel reasonably confident that inflation would return to the Committee’s longer-run objective over the medium term.

‘The Committee concluded that, although it had seen further progress, the economic conditions warranting an in-crease in the target range for the federal funds rate had not yet been met.’

The overnight plunge in the oil price certainly won’t raise any alarm bells on the inflation front. Brent crude fell 4% and West Texas Intermediate 5% in US trade last night. Brent is now just above its January low. West Texas just hit its lowest level since 2009.

The commodities bust grinds on…

Oil’s performance over the past 12 months is precisely why you shouldn’t try to pick bottoms…or ‘catch a falling knife’ as the saying goes.

As an advocate of value investing, I’ve done this plenty of times over the years. But it’s a low probability game. It’s what led me to tweak my approach. You must take trends into account when investing.

Oil is a good example of what I mean by this. Let’s have a look at the chart… 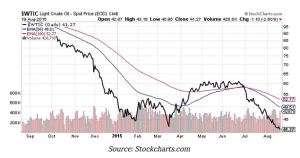 Oil crashed during the second half of last year, falling from over US$100 a barrel to less than US$45 in January 2015. Many thought the sell-off represented a great buy, and piled in to oil stocks.

The trade looked good for a few months, but then oil turned back down and made a new low in March. Again, the bargain hunters came in and oil began a hefty rally, trading back to US$60 a barrel for a few months.

But the rally was short-lived. Oil prices weakened in July and have now crashed to new lows. What do the bargain hunters think now? Still a bargain?

There’s a low stress way to play these situations. I call it the fusion method of investing. Firstly, assess the fundamentals to see if the market is mis-pricing the situation. In the case of oil, the fundamentals are poor. There’s a truckload of supply out there and no one is pulling back.

As you’ve seen with iron ore, when prices fall, the marginal producer doesn’t pack up and go home. It stays in the game for as long as it can by producing more. In the short to medium term, this pushes the price down further.

It’s the same thing with oil. The response to lower prices is to produce more in order to maintain cashflows.

So the fundamentals tell you the low price is deserved.

Next, I look at the trend. I explained how I do this last week through the use of moving averages. Moving averages smooth out daily price volatility and reveal the underlying trend of a stock or a particular market.

This, combined with a weak fundamental picture, warned you not to buy into the rally.

With oil breaking down to new, long term lows, the price action is telling you to stay away. The downtrend remains in force. This could turn out to be the bottom for oil. But it’s a low probability game trying to guess when the bottom will actually arrive.

On a broader scale, the energy bear market is disastrous for Australia. The falling iron ore price is bad enough. Our next great export hope, LNG, is now in all sorts of trouble.

Just as the massive Queensland LNG projects near completion and get ready to ship their first LNG cargoes, the price craters. This makes it very hard, if not impossible, for a project to generate anything above its ‘cost of capital’.

When a project can’t cover its cost of capital (effectively, the rate of interest on the funds used to build the project) it erodes wealth.

For example, Santos [ASX:STO] needs an oil price of US$40 to break even in cashflow on its GLNG project in Gladstone. It has a $900 million per annum capital expenditure bill to ensure it produces at the required volumes.

So at current prices, STO is hardly making enough cash to even maintain its operations, let alone make a return on all the capital ploughed into it.

Over the past five years, around $200 billion went into Australian LNG projects. The returns on all that capital will be minimal. It’s just another case of mal-investment on a grand scale. First iron ore, now LNG.

The grotesque nature of the global financial system creates unsustainable booms that in turn create false price signals. Naïve managements respond to these signals by increasing capacity for a demand that was never really there…certainly not on a sustainable basis.

What I mean by that is there is a huge amount of ‘money’ in the financial system. It leads to inflation not in goods and services but in asset prices. During the commodity boom, hedge funds and speculators used abundant liquidity to push up prices.

This gave a false signal of real demand. But it was just financial demand driven by vast amounts of central bank created liquidity.

Now, the idiot central bankers want to keep rates lower. Despite all the evidence that low rates lead to excess supply. Which leads to deflation in the real economy!

But the mining bosses just don’t get it. The Financial Times reports today that the chief of commodity giant Glencore, Ivan Glasenberg, is whinging about the speculators…

‘“Prices are still not making sense where they are… it’s the funds driving it where it is today, not the actual demand,” Mr Glasenberg argued. “They believe demand for commodities is going to fall and continue to fall and that’s their view. Our view is what we see on the physical movement of commodities and it’s not too bad. We see the flows are still pretty strong.”’

Funny how it was his genius that took advantage of the ride up, but now it’s the speculators behind the price plunge. Don’t blame the speculators, Ivan, blame the central banks for stoking the fire.

And for slowly destroying the global economy.