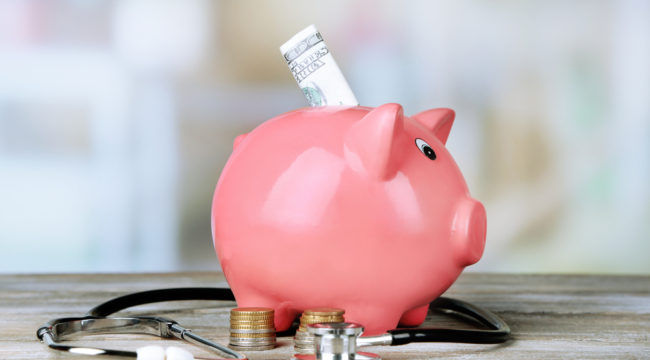 Speaker Ryan’s Obamacare “repeal and replace” plan, as I’ve been predicting, is a complete fiscal disaster.

Not only will it add $1.1 trillion to the Federal deficit over the next decade, but, more importantly, it reforms exactly nothing.

It leaves Obama’s big Medicaid expansion virtually in place, swaps one kind of tax credit for another in the individual insurance market and leaves the huge, perverse tax subsidy — amounting to upwards of $350 billion per year — for employer plans completely untouched.

This latter point exemplifies the Profiles in Cowardice that suffuses the Ryan Plan; and shows that if the legislation ever does make it through the House and Senate, it will cost every penny as much as Obamacare when all the vote getting deals are finally done.

From a fiscal perspective, the Ryan plan starts $1.1 trillion in the hole on a ten-year basis because it repeals, appropriately, the individual and employer mandates and the Obamacare taxes on providers, high cost plans, medical devices and high income taxpayers.

The mandates would have generated nearly $300 billion in fines over the next decade, according to the Congressional Budget Office (CBO), and upwards of $800 billion from the Obama tax grabs.

So the new plan is bleeding $1.1 trillion in red ink before the black ink is dry on the remainder of its 123 pages.

Likewise, an earlier draft of the Ryan plan provoked an outcry from fiscal hawks in the Freedom Caucus and Republican Study group because it established a new entitlement in the guise of reform.

In typical fashion, however, the revised plan puts a fig leaf over Ryan’s age-based tax credit entitlement by eliminating Bill Gates’ eligibility for a $4,000 tax credit (he’s 61) — along with a few million other American households in the super-affluent tier.

I doubt, however, whether anyone who can do 5th grade math will be fooled by Ryan’s double shuffle. The new provisions still amount to a massive tax credit entitlement that in some ways is for more profligate than Obama’s health exchange premium subsidies.

In theory, upwards of 95% of households are eligible to claim some or all of these tax credits which range from $2,000 to $4,000 per person based on age brackets. That’s a multi-trillion entitlement under any other name.

Then again, the tax credit for individual policies is only the tip of the medical entitlement iceberg.

The U.S. has a sweeping medical entitlement system that will cost more than $24 trillion over the next decade, but Ryan’s new plan simply perpetuates the status quo.

These entitlements amount to almost double the 10-year cost of $13.2 trillion for social security. And 7X the $3.3 trillion cost for benefits like foods stamps and welfare.

Yet the crushing cost inflation and excessive utilization that has ballooned the U.S. health care system to 18% of GDP (compared to 10-12% for virtually all other developed countries) results directly from these massive government subsidies.

They foster a perverse system of socialism for beneficiaries and crony capitalism for the providers and their various cartels.

The heart of the problem is a giant third-party payment system that essentially eliminates market pricing and consumer shopping behavior. The result is overutilization of services, overpricing, and free-riding.

When virtually everything is paid for by third-parties, you do not have price-conscious, shopping-oriented, cost-minimizing consumers who have their own money at risk — just several hundred million cost-indifferent patients with various kinds of prepaid cards (e.g. medicare, Medicaid, blue cross, employer plans, etc).

Needless to say, there is no such thing as a true free market when their are no real consumers.

What passes for the health care market today is just a bureaucratic clearing house where provider cartels attempt to maximize their billings — while insurance companies, HMOs, PPOs and utilization review and pre-approval agencies seek to minimize what they certify for payment.

As a result, the medical professions and delivery system have morphed into Washington’s greatest crony capitalist lobby.

The consequence, in turn, is high prices, endless hassles over coverage and pre-approvals and a complete loss of consumers’ sovereignty over their own health care costs and quality. And that is what the public — whether it fully recognizes it or not — fundamentally objects to about “Obamacare.”

At the end of the day this is health care socialism and it is what will finally bankrupt America. Yet Speaker Ryan’s Obamacare Lite plans keeps that system fully in place. After all, the K-Street lobbies which essentially drafted his bill would have it no other way.

Needless to say, if you lay an unreformed Medicaid program and ultra-generous tax credits on the current inefficient and bloated system the only thing that will result is an eventual fiscal hemorrhage.

The Obamacare exchange premium subsidies would have cost about $900 billion over the next decade. But I am more than confident that the new Ryan medical credits will cost every bit of that amount and probably a lot more. How could it be otherwise, when families with a quarter million dollars of annual income are eligible for the largesse?

But the real skunk in the woodpile is Ryan’s smoke and mirrors on Medicaid. According to CBO, the current law will cost $5.2 trillion over the next decade, and when we add in the state matching share the total taxpayer cost is about $8.5 trillion.

Yet I see no reason to believe that Obamacare Lite will cost any measurable amount less.

In the first place, the new Ryan Plan does not repeal the Obama Medicaid expansion to cover everyone up to 138% of the poverty line. The 11 million recipients Obama added to bring the Medicaid rolls to about 70 million would stay the same.

The only thing the Ryan plan does is that after 2020, anyone eligible for the expansion, but not on the rolls as of December 31, 2019, will be funded at the standard Medicaid matching rate of about 57% on average, not 90%.

But whatever “savings” that produces will be negated by Ryan’s sop to the GOP governors. Namely, the new $100 billion “innovation grant” program to the states for subsidizing high cost populations (pre-existing conditions) and other purposes.

In short, the Federal Medicaid cost would be about $600 billion annually by 2027 compared to CBO’s current estimate of $650 billion under current law. And by the time they get done with the vote-count deal making, even that small savings will likely disappear entirely.

Neither the GOP Congressional contingents nor Donald Trump explained to the American public that the problem is really too much health insurance and way too much government spending and subsidization of consumer medical costs.

In order to pacify the K-Street medical lobbies and the approximate 35 red state governors and legislators, Ryan has just fuzzed up Medicaid and transformed the Obama premium subsidies into even more generous tax credits.

But it won’t work. If the House leadership cannot round up the votes for a deficit neutral “repeal and replace” bill — which is totally out of reach in the current draft — they will not bring it to the House floor for a vote before the Easter recess or anytime soon thereafter.

Back in the day, I learned a powerful lesson peddling the Reagan spending cuts — as mild as most of them were. Namely, that if the courage-challenged House GOP back-benchers do not see a path to Senate passage they won’t walk the plank in the first place.

And they especially don’t want to have to explain their “wasted vote” to angry crowds of Soros and DNC instigated crowds at town meetings from now until the next election.

I have been arguing that the Donald is the Great Disrupter who will bring the nation’s mutant system of debt-ridden, Bubble Finance crashing down. His naïve belief that Obamacare can be fixed with block grants, tax credits and interstate insurance competition (which already exists) is a case in point.

Soon the Congressional GOP will fracture over Obamacare Lite, and I don’t know who puts it back together.