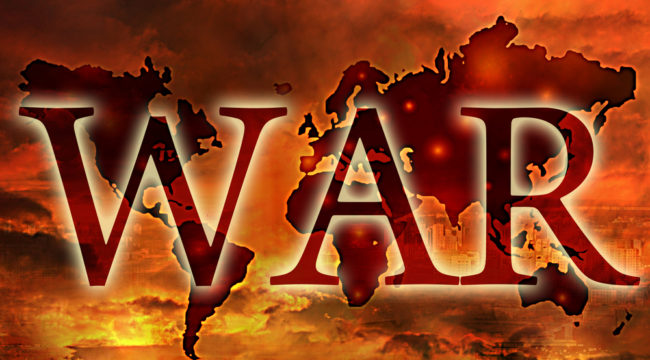 Now, a Trade War — Is a Shooting War Next?

A popular thesis since the 1930s is that a natural progression exists from currency wars to trade wars to shooting wars. Both history and analysis support this thesis.

Currency wars do not exist all the time; they arise under certain conditions and persist until there is either systemic reform or systemic collapse. The conditions that give rise to currency wars are too much debt and too little growth.

In those circumstances, countries try to steal growth from trading partners by cheapening their currencies to promote exports and create export-related jobs.

The problem with currency wars is that they are zero-sum or negative-sum games. It is true that countries can obtain short-term relief by cheapening their currencies, but sooner than later, their trading partners also cheapen their currencies to regain the export advantage.

This process of tit-for-tat devaluations feeds on itself with the pendulum of short-term trade advantage swinging back and forth and no one getting any further ahead.

After a few years, the futility of currency wars becomes apparent, and countries resort to trade wars. This consists of punitive tariffs, export subsidies and nontariff barriers to trade.

The dynamic is the same as in a currency war. The first country to impose tariffs gets a short-term advantage, but retaliation is not long in coming and the initial advantage is eliminated as trading partners impose tariffs in response.

Trade wars produce the same result as currency wars. Despite the illusion of short-term advantage, in the long-run everyone is worse off. The original condition of too much debt and too little growth never goes away.

Finally, tensions rise, rival blocs are formed and a shooting war begins. The shooting wars often have a not-so-hidden economic grievance or rationale behind them.

Meanwhile, a global trade war emerged after the Smoot-Hawley tariffs (1930) and comparable tariffs of trading partners of the U.S.

Eventually, the world was engulfed in the flames of World War II, and the international monetary system came to a complete collapse until the Bretton Woods Conference in 1944.

Is this pattern repressing itself today?

Sadly, the answer appears to be yes. The new currency war began in January 2010 with efforts of the Obama administration to promote U.S. growth with a weak dollar. By August 2011, the U.S. dollar reached an all-time low on the Fed’s broad real index.

Other nations retaliated, and the period of the “cheap dollar” was followed by the “cheap euro” and “cheap yuan” after 2012.

Once again, currency wars proved to be a dead end.

Now the trade wars have begun. On Thursday, July 27, the U.S. Congress passed one of the toughest economic sanctions bills ever and sent it to President Trump for signature. Trump signed it, although not enthusiastically.

But Trump’s views don’t really matter. The bill was passed by veto-proof majorities in the House and Senate, so even if Trump vetoed the bill, Congress would have overrode him and the sanctions would become the law of the land.

This new law provides that U.S. companies may not participate in Russian efforts to explore for oil and gas in the Arctic. But it goes further and says that even foreign companies that do business with Russia in Arctic exploration will be banned from U.S. markets and U.S. contracts.

These new sanctions pose an existential threat to Russia because depends heavily on oil and gas revenue to propel its economy. Russia tries to control new discoveries in order to maintain its quasi-monopoly position as the premier energy provider to Europe. Russia needs Western technology to meet the challenges of Arctic exploration.

In effect, this law handicaps Russia’s efforts financially and technologically and weakens its grip on global energy markets.

Russia has already vowed to retaliate.

Yet Russian retaliation will not consist of reciprocal sanctions on the U.S. Russia has said it will strike “asymmetrically.” This means Russia will use the means it is best at, including cyberattacks.

If you wake up one day soon and the power grid is down and banks and stock exchanges are closed, you can thank President Putin and the U.S. Congress for starting a financial and cyberwar that neither side could control.

Meanwhile, the long-expected trade war with China has begun at last. This is a trade war that President Trump threatened the entire time while he was on the campaign trail. Yet after Trump was sworn in as president he did nothing about Chinese trade and currency practices. Trump did not declare China a “currency manipulator” and did not impose tariffs on Chinese steel and aluminum being dumped on U.S. and world markets.

The reason Trump did not act swiftly was because he wanted China’s help facing North Korea’s nuclear weapons and missile programs. If China would put pressure on North Korea, Trump would go easy on China.

But China did not hold up their end. China has done nothing to change North Korea’s behavior and will not do so in the future. Now Trump has no reason to hold back. The White House has already begun to unleash its formidable arsenal of trade weapons against China.

The Trump administration has made clear its intentions to impose tariffs on cheap Chinese steel and aluminum and to punish China for theft of U.S. intellectual property. After that, more action will be taken to punish Chinese banks that help North Korea finance its weapons programs.

The U.S. can block acquisitions of U.S. firms by Chinese companies through review by a group called the Committee on Foreign Investment in the United States, or CFIUS. That committee has already blocked several Chinese deals and has many more stuck in the review pipeline.

By November, the U.S. will label China a currency manipulator, which will start another review process, leading to still further sanctions. Like Russia, China will not take any of this lying down but will retaliate with its own sanctions, tariffs and bans on U.S. investment in China. Get ready for an all-out financial war between the U.S. and China.

This trade and currency war will shake markets and be a major headwind for world growth.

Germany is also in the crosshairs because of its huge trade surplus. Trump has already torn up the TPP trade agreement and has put Canada, Mexico and South Korea on notice that their trade deals need to be renegotiated.

None of these trading partners will stand still for this U.S. assault on bilateral trading relations. Retaliation can be expected. A full-scale trade war is now upon us.

Next comes the shooting war with North Korea, which will inevitably draw in Russia, China, South Korea and Japan. This will be tantamount to World War III.

As Mark Twain reputedly remarked, “History does not repeat, but it does rhyme.”

Today looks like a replay of the 1930s. Let’s hope things do not go as far as they did then. Markets are not priced for the worst outcomes based on the lessons of history.

As the progression of currency wars, trade wars and shooting wars plays out, get ready for some major market moves to the downside as the reality of this sequence begins to sink in.