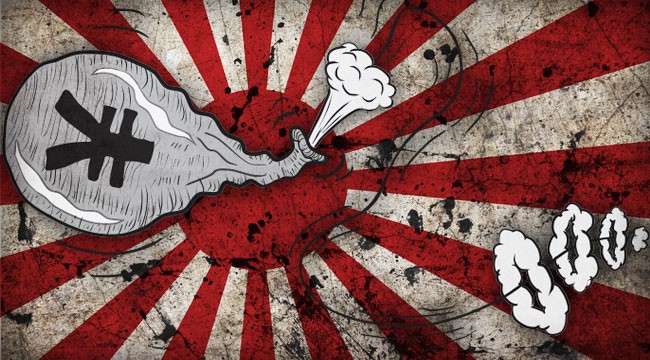 Notes on Deflation From Tokyo

I arrived in Japan on Friday and have been exploring Tokyo with my 16-year-old son, Calvin.

Earlier this year, I wrote to you about the deflationary chill affecting U.S. and European markets. I used the metaphor of an ice age, borrowing from the late Barton Biggs. And I focused on the experience of what it’s like to live in a financial ice age and how to invest in one.

Well, Japan is ground zero for studying how a deflation upsets all the normal economic assumptions we have.

Take money. The Japanese currency is the yen. (Which, I’ve learned, the Japanese pronounce as “en.”) I’ve been reading David Pilling’s Bending Adversity: Japan and the Art of Survival. And Pilling has a great example where talks about a family that stored yen notes in an envelope in their fridge:

“Because of the deflation that had been gnawing at prices since the mid-1990s, the crisp notes could acquire more goods the longer they remained in their frozen vault. If, for example, someone had stashed 100,000 yen in the fridge in 1995, by 2012, its purchasing power would have risen to 112,000 yen.”

It is a strange, topsy-turvy world where the value of currency appreciates. No American would think stuffing $10,000 in their fridge for 17 years would be a good idea. In Japan, this has been a good idea for a long time. No wonder they sock away yen.

Pilling writes that one economist figured out that as much as $300 billion worth of yen notes “roughly the economic output of Denmark — had simply vanished in people’s cupboards and under their futon mattresses.”

In a deflationary chill, you would also come to expect that your income might not change in nominal terms. There is no feeling of entitlement about getting an annual raise in Japan. In fact, as Pilling writes, “a worker’s wages might fall, but he or she could still feel better off.”

Before I left for Tokyo, I read Robbins’ annual letter to investors in his Glenview Opportunity Fund. (It is one of the best annual letters I’ve read so far this year, loaded with ideas. I’ll share a link further down below.) Robbins spoke recently at the Japan Society about markets and investing in a world of deflationary pressures. The talk formed the basis of his letter.

He writes about the other main feature of a deflationary chill — extremely low, or even nonexistent, interest rates. In fact, they may go negative. Robbins points to some examples in today’s markets:

Such a bizarro world leads to “esoteric concepts that we can write about but are very difficult to actually comprehend.”

Valuing stocks and assets becomes harder, because many of the existing models won’t work. Robbins writes:

“All the formulas we learned in business school blow up. Good luck computing a dividend discount model [when the denominator is negative]… Obviously, growth could be pressured in a deflationary environment, but many businesses would retain absolute pricing power and have [theoretically] infinite value.”

The deflationary chill also means you have to think differently about economic statistics. People like to write about how Japan’s economy has gone nowhere for 20 years. On the surface, that seems right.

But when you account for deflation, you get a different picture. As Pilling writes: “Japanese incomes may have been falling, but the price of everything from newspapers to haircuts to housing and sushi have been stuck at 1981 levels.”

Pilling notes if you adjust for deflation, Japan does not look so bad compared against other countries. If you rebased the size of the economy to 100 in 1989, then Japan’s economy is roughly at 127 today, compared with 137 for the U.S. and 144 for the U.K. over the same time frame.

Besides, there are subjective factors at work. The Japanese enjoy a famously high standard of living. Crime rates, for example, are super low. “Dropped wallets are almost invariably returned, cash untouched,” Pilling writes. Life spans are long, and the lifestyle is comfortable.

I can tell you just in just my short stay in Tokyo so far, it is one of the comfortable cities in Asia — or the world, for that matter.

There are the taxis with the doors that open automatically. There are the machines that wrap your wet umbrella for you so it won’t drip everywhere. There are the toilets — soft, heated and with extra amenities such as the gentle spray of warm water that washes your behind. There are heated mirrors in the bathroom that don’t fog up when you take a shower. (“Tokyo is a city of the future,” a friend of mine told me before I left. I now see what he means.)

There are other conveniences. There is no tipping in Japan. I knew that but forgot, and in my first taxi ride, the driver had to call out after me to give me my change. There are no beggars that I could see. There are no aggressive merchants trying to sell you stuff, as is common in Asia.

Another feature common in Asia but missing here: the incessant honking of car horns. I don’t think I’ve heard even one yet. Tokyo must be one of the quietest large cities on Earth.

Then there is the general sense of order. There are orderly lines everywhere. Even on escalators. It’s remarkable how everyone stands to one side.

There are trains everywhere that seem to run everywhere.

You also don’t have to worry about where you eat or what you eat. The Japanese are attentive to matters of hygiene and cleanliness.

It makes you wonder. Maybe a deflationary chill doesn’t have to be so bad after all. China, India, Brazil and other celebrated economies would be lucky if they ever achieved for their populations the widely enjoyed standard of living of the Japanese.

I should also point out that Japan was not always caught in this deflationary ice age.

The bright line on the Japanese financial timeline is 1989. It was then, on the last trading day of the year, that the Nikkei — Japan’s main stock index — almost touched 39,000. After that, everything changed forever… The bubble burst in 1990, and Japan’s markets have still not come close to that high. (The Nikkei currently sits at around 19,000.) The deflationary chill set in.

It was an epic bubble — a topic for another time — and an epic bust. That bust triggered the deflationary trends that followed. And while there are many differences with the U.S., the episode begs a series of questions:

Could 2007 be the bright line on the U.S. financial timeline?

Could the 2008 crisis that followed mark the date when things changed forever?

Could we be in the midst of our own deflationary ice age?

And what about Europe? Are they turning Japanese?

More another time. Until then…