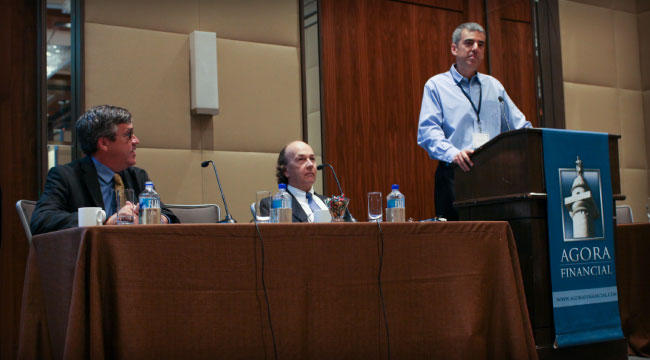 Notes From the "House of Cards"

How much time should you spend trying to figure out what’s next for the stock market, the Fed, the economy, interest rates, currencies and geopolitics?

My answer is “Not much.”

I’d say you are better off studying businesses and trying to find ones you want to invest in and hold onto. The big picture is important but unpredictable.

That was my message on Thursday, where I was a speaker at the “House of Cards” Symposium hosted by Jim Rickards. The focus of the conference was on preparing for “imminent monetary collapse.” And my bottom-up approach stood in sharp contrast to the top-down view preferred by my host.

This doesn’t mean that I’m a Pollyanna. Bad things happen. The world is a combustible place. And I always approach the market with some fear that I could lose money. Fear is not a bad thing. Fear is what keeps me from doing reckless things. People who aren’t scared scare me.

I do, however, have a different way of handling the challenges of a volatile world. Later, I was on a panel, which featured some lively debate about this. I would like to make two points here inspired by these exchanges.

The big-picture crowd loves to analyze stock market indexes, such as the S&P 500. They love to cite CAPE ratios (an average of past 10 years of earnings) and other metrics to divine the path of future returns.

Just because a stock market index such as the S&P 500 is pricey doesn’t mean you should give up on stocks. Unless you are a buyer of the index itself, it is not relevant to the business of finding great stocks today.

The big-picture crowd likes to cite this 17-year stretch as dead money for stocks. The Dow Jones industrial average basically went nowhere. (This performance was worse than it appears because inflation was high during this period.) Thus, you might conclude, you didn’t want to be in stocks.

But here’s what my research on stocks that returned 100-to-1 found: There were 187 different stocks you could’ve bought between 1966-1982 that multiplied your money 100x.

In fact, during that 17-year stretch, you had at least a dozen opportunities each month to multiply your money 100x if you just held on. In some cases, you didn’t even have to wait very long. Southwest Airlines returned more than 100x in about 10 years beginning in 1971. Leslie Wexner’s L Brands did it in about eight years starting in 1978. In 1966, you could’ve bought H&R Block and turned a $10,000 investment in to $1 million in under two decades.

The indexes can tell you what kind of environment you are in. It’s certainly harder to find great opportunities in richly priced markets. And it’s easier to find big winners at market bottoms (but perhaps not so easy to buy them, as fear is rife at such times). These facts should surprise no one.

My point is don’t fret so much over guesses as to where the stock market might go. Keep looking for great ideas. If history is any guide, they are always out there.

As much as the big-picture crowd likes to hammer away at stocks, they do have a soft spot for stocks with tangible assets — like gold miners and oil stocks. The usual belief is that these stocks will protect you when the dollar loses value.

I always think about Warren Buffett’s example from his 1983 letter, when inflation was still high on everyone’s list of concerns. Buffett ran through an example of See’s Candies versus a business with lots of tangible assets — let’s call it Gold-Oil Co.

Now let’s roll forward and say inflation doubles prices. Both need to double their earnings just to keep pace with inflation. As Buffett writes, “This would seem to be no great trick: Just sell the same number of units at double earlier prices and, assuming profit margins remain unchanged, profits also must double.”

But here’s the kicker: Both businesses will need to double their investment in tangible assets, too. As Buffett writes:

“Both businesses probably would have to double their nominal investment in net tangible assets, since that is the kind of economic requirement that inflation usually imposes on businesses, both good and bad… And all of this inflation-required investment will produce no improvement in rate of return. The motivation for this investment is the survival of the business, not the prosperity of the owner.”

Buffett paid $25 million to own See’s. After this round of inflation, See’s “might be worth $50 million if valued (as it logically would be) on the same basis as it was at the time of our purchase.”

Note that inflation was bad for both. But it was less bad for See’s, which owned little in tangible assets. This idea has been hard for many people to grasp, as Buffett acknowledges:

“For years the traditional wisdom — long on tradition, short on wisdom — held that inflation protection was best provided by businesses laden with natural resources, plants and machinery, or other tangible assets (‘In Goods We Trust’). It doesn’t work that way. Asset-heavy businesses generally earn low rates of return — rates that often barely provide enough capital to fund the inflationary needs of the existing business, with nothing left over for real growth, for distribution to owners or for acquisition of new businesses.”

The irony for the big-picture crowd is though they tend to shun stocks, when they do get involved, they favor the worst kinds.

To quote another great investor, John Maynard Keynes: “The difficulty lies not in the new ideas but in escaping from the old ones.” The ideal business during an inflationary time is one that (A) can raise prices easily and (B) doesn’t require investment in a lot of assets.

This is not to say you can’t make money in tangible assets or that my colleagues are morons. I have respect for each of them and for what they do. I simply have a different view. I humbly offer up the above in a friendly spirit of debate and as food for thought.