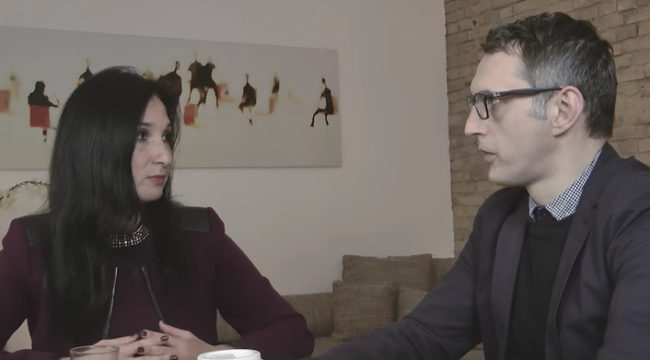 Nomi Prins: This is an Ongoing Financial Crisis

Nomi Prins is the best selling author of All the Presidents’ Bankers and is currently working on her latest book, Artisans of Money.  Prins’ is a former Wall Street insider who has worked previously at some of the largest banks in the world including Goldman Sachs, Lehman Brothers and Chase Manhattan Bank.  She continues to be a strong advocate for Glass-Steagall Act legislation and financial reforms of Wall Street.

When posed with the question regarding the financial crisis that began in 2008, and what may be in store for the ongoing crisis she remarked, “If we look at why the problems of 2008 happened, it was because issues in the United States financial structure at the beginning of the 2000’s had not been solved. We had deregulation of the financial industry in 1999, which allowed banks to consolidate deposits and loans.  It allowed them to participate in more speculative betting activities.  After that, two years later, we had a minor recession where scandals filled in our energy, telecoms and banking sectors. We then had substantially lower rates stemming in 2002 and 2003 that made banks turn to find something else they could make a lot of money. That something else was subprime mortgages that had been repackaged and sold multiple times over.  When we get to 2007 and 2008, all of that fell apart.”

“What is different now, and why it is worse, and why we are only in the first phase of a much bigger financial crisis is because we have had eight years of buildup.  From the central bank’s perspective, they are coming in and subsidizing the system – what I call artisanal money – where you manufacture money, print it and do not separate banks, regulate them or reduce any real risks they impose on the economy.  Now, we are falling from a height where even greater debt, capital and cheap money has all been pushed into the financial system. When we fall is in question, but that we will fall is definite.”

“In the wake of the crisis the Federal Reserve had a different role.  That was to organize and coordinate its own monetary policy throughout the world.  This began in the wake of the financial crisis in the United States, which was to reduce rates to zero and to adopt a massive quantitative easing (buying additional debt securities into the books of the Fed).  It was not simply lending at zero, it was making money available in various ways to the big banks.  It was also buying debt securities, effectively making money available to the government, all through the Fed in order to preserve the financial system and give the big banks liquidity needed to continue to be big.  The Fed then exported this policy throughout the world. It became something that was coordinated with the Bank of Japan, the European Central Bank and others. This is what we are living through today.”

When asked about the big banks and their involvement in the crisis she responded, “They were the same big banks that pushed the deregulation in 1999.  They pushed deregulation of Glass-Steagall Act from 1933, which separated their functions, and was eventually repealed.  It allowed them to consolidate their size, risk and complexity into one “house.”  These are the same banks at the core of the financial crisis.  They were the big six banks in the United States that include JPMorgan Chase, Bank of America, Citigroup, Wells Fargo, Goldman Sachs and Morgan Stanley. They are still the banks that, since the crisis, have become about 43% bigger in the total amount of deposits they hold. They’ve almost doubled in terms of the amounts of assets that they hold – relative to the amount prior to the crisis – and still maintain 95-97% hold on all of the trading assets that exist in the U.S banking sector. The bigger banks have become bigger since the crisis.” 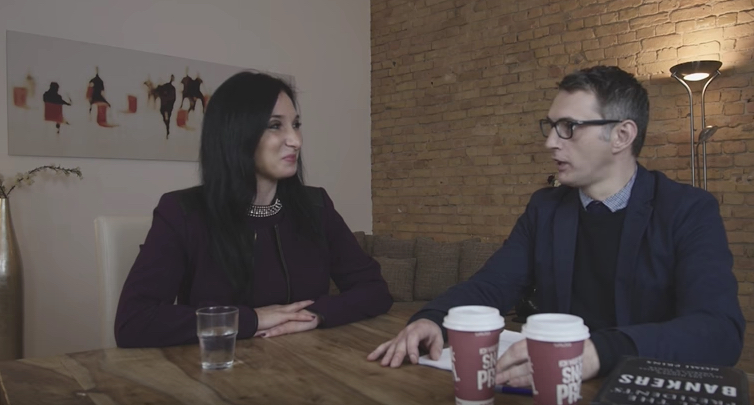 She then remarked on the problematic standings of the U.S central bank, “The idea that the Federal Reserve is that it is technically not a government entity but it is not a private institution.  It is somewhere in the middle.  The reality is that it is constructed with shares and proportionally allocated by the banks that ultimately get help from the Federal Reserve.  For example, the biggest banks have a higher percentage share of membership in the Federal Reserve than the smaller banks.  When there is a problem they have a bigger call on that. Either the banks are very greedy, or they continue to require money that has no cost because they do not have the ability to function as financial institutions without that external help. Or both.”

The interviewer then asked about the influence of China’s alternative approach to the West and the increasing Eastern shift  following the 2008 financial crisis.  Lars Schall noted an IMF report as saying, “The gold bullion component of monetary gold is the only case of a financial asset with no counterpart liability.”

To that, alternative currency discussion and the ongoing financial crisis Prins’ highlights, “One of the things that China has done is seek to establish itself as more of a dominant reserve currency.  Up until October of last year China was not in the special drawing rights basket of the IMF. A standing in which the U.S dollar is still the supreme currency because it is the currency of choice. This means that most central banks have it in their reserve. To that extent the Federal Reserve, as a dominant central bank, has more control over global policy.  It exerted that power in the wake of the financial crisis.  China was not able to exert any of that. So what they did was find a new way to get into the SDR and have their currency adopted into more of a global reserve basis and come in at the middle reserve in the basket of currency players.”

“Gold is the other side of that. It would allow China to be able to maintain greater stability.  Having gold is a way to get back to a more independent equilibrium.  One element is central banks and currency… the other is to have something else to be used in the event of a crisis.  It offers an element to create stability.  In terms of buying gold, it is a way to move away from the dependency of the dollar.”

Speaking to the same perceived Chinese concern out of the West, when asked about accusations over concern over currency manipulation she noted, “It has been policy of individuals from both party lines to bash China as a currency manipulator.  President Obama’s first Treasury Secretary and head of the Federal Reserve all had labeled China as a currency manipulator.  Donald Trump has simply maintained this idea of blaming China for trade and deficit issues that the United States has experienced. Trade is the bigger issue.  I see Trump continuing to go about potential bilateral and individual trade agreements.  China will also continue to seek alternative trade options to the West.”

To see the full interview with Nomi Prins and Lars Schall click here.