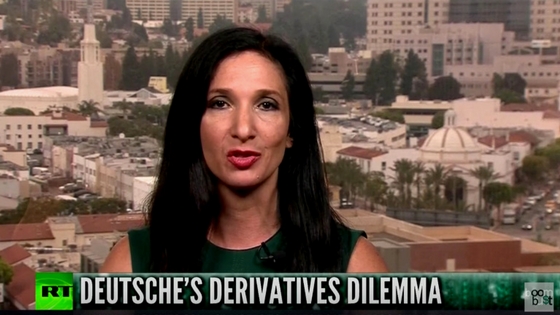 Nomi Prins spoke with Edward Harrison at RT on the current new out from Deutsche Bank, the troubled German bank that is facing a $14 billion fine by the U.S Department of Justice.

“The problem is, Deutsche Bank does not have $14 billion dollars set aside. Its market cap is around $17 or $18 billion. It really does not have the funds… And now it is negotiating to get a better deal on its deal.”

She went on to note that the stocks have taken a considerable hit over the year. When asked about the massive derivatives in position by the German bank Prins said, “If you look at the derivatives positions of Deutsche Bank, which is around $47 trillion… You start to have contracts throughout the system, and banks have interactions with each other on all of these derivatives… They are all coordinated. They are all connected.”

She then pointedly stated, “These things don’t just net out as the banks would like regulators and some in the media to believe. These things have tremendous risk.”

Nomi Prins is a former Managing Director on Wall Street and is now a best selling author and investigative journalist.  She is currently working on her forthcoming book, Artisans of Money, that focuses on central banks and the dark connections in global finance. Nomi is scheduled to speak at the Tokyo Stock Exchange (JPX) next month where she will discuss the lessons from the ongoing financial crisis.

When asked about what risk that Deutsche Bank poses to the United States and the world Ms. Prins said, “It does not take a lot of domino effect derivative risk to bring down a financial system. We saw that in the subprime crisis. It was not like everyone had all their positions separated. All of the positions were interdependent.”

“They were in a market whose value, or lack thereof, depended on how interrelated these positions and toxic securities were. It is the same thing in the derivatives world. Deutsche has a significant amount of derivative exposure as well as not enough capital to support that.” 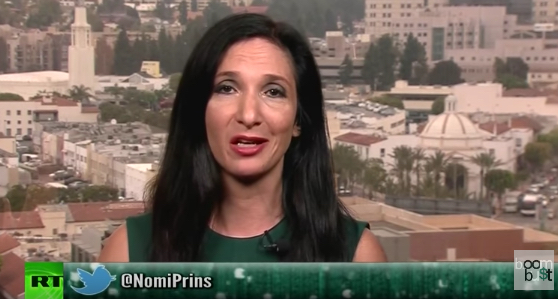 When Harrison pressed Ms. Prins on breaking up the big banks she said, “If the United States is leading in terms of “bigness” of financial systems and complexity but does not have regulation in place to control them, [then when they fail] the fall out changes the world.

“The fall out creates not just a crisis in the United States but creates a fall out throughout the globe. In which the world is still trying to recover and find alternatives to get away from that reckless regulatory system.”