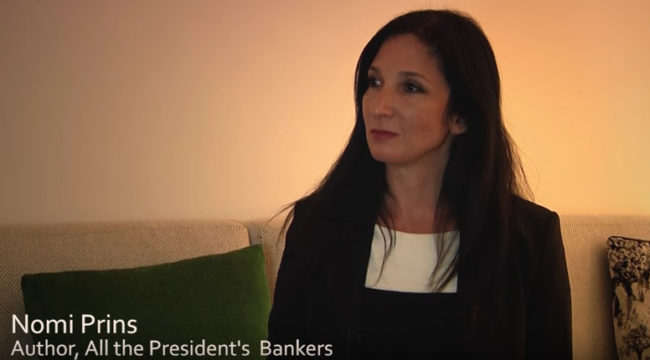 Nomi Prins joined Sprott Money News for its Ask the Expert segment that covered the Federal Reserve system, Glass-Steagall reform and even the recent activity from the U.S Treasury.

Beginning the conversation she highlighted U.S debt and the position of U.S treasury bonds. Prins remarks, “One of the reasons in general that government debt is considered an asset is that it can be traded and holds enough liquidity to either raise money or post as collateral for other forms of capital. They have an intrinsic benefit in the financial system between central banks, large multinational institutions and banks, etc.”

Nomi Prins is a former Wall Street insider where she worked as a Managing Director at Goldman Sachs among other major financial outlets. She is also a best-selling author who wrote All the Presidents’ Bankers, a book that examines the hidden alliances between Wall Street and Washington.

Switching gears, she was pressed on whether the U.S treasury bonds could face a replacement Nomi Prins noted, “In the current international monetary system we have where the U.S dollar is the major reserve currency there is a necessity for central banks and private banks to use and have the U.S treasury bonds. The bonds are used to balance payments and used for potential liquidity emergency mechanisms and any other financial circumstances.”

She went on to elaborate on the U.S treasury bonds and their use in the global financial system that, “In general, global governments around the world happen to use the treasury bond system to finance the discrepancy between their own domestic balance of payments. That is the revenues that come in from taxes, versus the payments that the U.S government might need to run the country.”

“From a two prong perspective, first look at the debt, because we don’t have a balance of payments that is positive, it needs to be issued to make up that gap in the U.S. Second, the dollar is the prevalent currency and U.S treasury bonds are the most liquid form of moving central bank policy around that currency relationship they do not seem to be going away anytime soon. In the last ten years we’ve had an extraordinary increase in U.S treasury debt to the extent that we are well over 100% relative to GDP.”

The interview then transitioned to talk about Federal Reserve reform and whether it can be reformed? Prin’s notes, “As we learned from the global financial crisis, the Federal Reserve has done a lousy job at regulating the risks that were coming into the financial system from the major private banks.”

“Not only did it do a bad job at detecting risks, it did the opposite and deflected concerns from those highlighting the risks. From the standpoint of monetary policy, looking ten years out, its pursuit of policy with absolutely no limitation from the outside (printing money, buying securities) was a failure.”

“If the Federal Reserve policies were able to make a real impact, we wouldn’t have needed them to go on for ten years following the financial crisis. What we are seeing right now is that there is no particular end in sight.  The fact that there is no jurisdiction that can instruct the Fed what to do, where it is currently working under unconventional policy for artificial markets, has created more risk instead of less.”

“If we were to create an external benchmark that at the very least pulls them into some coordinated approach, that would be a better way of maintaining stability. Whether that is a standard currency approach or whatever that might be.”

When speaking on how long the central banks might be able to stall and what tools in the face of another crisis Nomi Prins elaborates on her most recent research. “There has been collusion and collaboration amongst the G7 central banks. They have been ensuring that central banks like the Federal Reserve and others coordinate in their policy consortium moves. In effect we have seen a consistent global zero percent interest rate policy and ongoing quantitative easing policy be unveiled, even if some banks reduce their engagement. That’s why we have been able to perpetuate this system for so long.”

“This is not one individual central bank but a coordinated, collusive approach. Can that continue? The guidance, as well as the actions of the central banks has indicated there could be multiple years of this to come. Because there is no external limitation on their policy and there’s no voting them out I’d say this could go on for at least a few more years. For the most part the people in power are going to stay in power. Even in the case of the U.S, if we were to see Janet Yellen leave and Gary Cohn step in at the Fed, I’d expect we would see much of the same.”

When examining what chances for financial reform, whether in the form of Glass-Steagall or beyond, were for the Trump administration Prins’ directed, “Glass-Steagall is interesting because it is a check to a large extent on the reserve system. As a law, Glass-Steagall would be a counter to whatever crisis might happen. It would separate banks from being able to utilize deposits as loans, while still trading other types of less transparent and risk prone securities.”

Glass-Steagall is something that has more consideration right now in the U.S Congress under the Trump administration than it had under the last. I say that because I have spent a lot of time talking with members of Congress on the issue of Glass-Steagall. I have directly seen the expressed interest in members on both sides that have been looking at the avoidance of the government and central bank intervention in the event of another financial crisis. The biggest banks are still too big to fail.”

There is still risk in the financial system. What will help in the event of a real crisis, from ensuring that we don’t have to have another bailout, is to not have a connection between commercial banking and investment banking. That would mean banks would have to look at the risks that they are creating within their books. It would mean these risk taking banks would have to independently have to take on their own ventures.”

“There is a bill right now called HR-790 with around 50 signed co-sponsors that is a bipartisan suggested proposal that would reinstate Glass-Steagall. I think that is going to grow substantially in upcoming sessions of Congress. It will be very difficult to pass because none of the banks want this. The potential is better now than it has been and could, unfortunately, be better if there is another crisis.”

Turning to a global focus on central banking, she was asked in particular for her read on the Japanese experience. The best-selling author and economist notes, “Japan over the last 30 years has experienced a major banking crisis in the 90’s. That took a while to work its way through the system. Ultimately, they put in place more regulations for banks within Japan that had government support. They also jumped ahead of the Fed and launched one of the first quantitative easing (QE) programs amongst central banks in the mid-2000’s.  They had the Bank of Japan, their central bank, inject money to help resurrect banks and maintain support for the banking system.”

“Ultimately, they found out that stimulus itself didn’t stimulate the economy and could only go so far to assist with banks that were in trouble. They complimented the QE program with more financial regulation on the types of risks in the financial system.  Now their QE model is very active and in fact since Kuroda became the head of the BoJ, the percentage of assets that the central bank holds on its books relative to GDP is close to 80%. That’s something to watch and could end badly for Japan.”