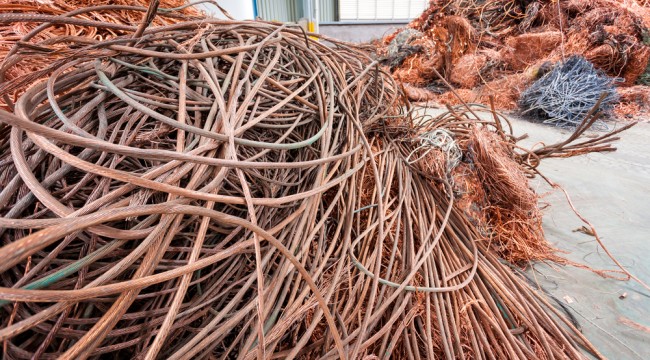 No Way to Kill the Copper Price

Russia’s military actions add a significant risk markup to gold and silver and will alter energy markets for many years to come. It’s investable, for sure.

Spot gold, for example, was selling at $1,371 this morning. Silver was selling at $21.39. To paraphrase comedian Tina Fey making fun of political figure Sarah Palin, I think that a lot of people can see Russia from their window now. Just look for the exhaust smoke from the tanks.

Really, in case you’re not old enough to know about these kinds of things, Russians don’t fool around. Russians don’t surrender. Russians don’t retreat. Not without a fight. Not these Russians. We’re in a different world than not long ago.

So what do you need to worry about? Let’s begin with hard numbers, such as… the price of copper over the past month. Note the obvious recent decline. While gold and silver prices have risen — courtesy of Putin’s Army — red metal is getting cheaper. The price drop has spooked investors. It’s worth worrying about. 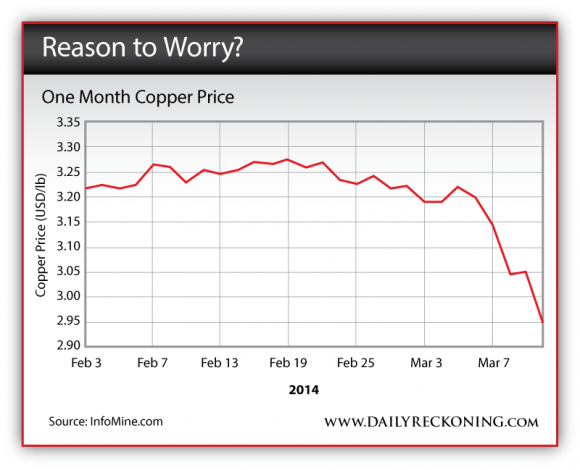 What does it mean when copper moves from the $3.25 range in mid-February to below $3 last week? That’s 9% or so to the downside. It matters, but still… how does it fit into the longer term? After all, different things happen for different reasons. Let’s back up and look at the one-year copper price chart. 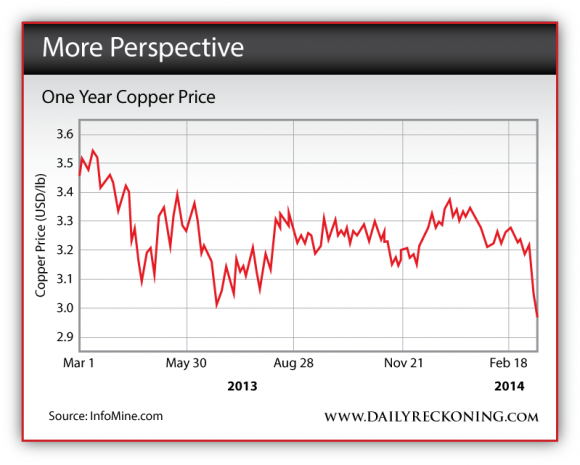 Current copper prices near where they were last summer during the metals meltdown. It certainly wasn’t the end of the world last summer, but the price excursion took many a mining share price into the depths as well, you’ll recall. (Ugh, how can you forget?)

Then again, after the summer doldrums, we had a fall recovery, an end-of-year sell-off and then a January recovery. Which gets back to the basic questions: What does the latest copper move mean? What’s the broad investment signal?

When I look at these charts in the wake of the copper price decline of the past month, I have to ask both sides of the question. Are we at an ephemeral price point? The bottom side of a bouncing-ball cycle? And is this a harbinger of more positive things to come? Or will copper prices fall further, taking share prices along for the ride?

If anyone has a copy of The Wall Street Journal from next month, let me know.

On the negative side of things, mainstream news puts much of the blame for declining copper prices against China. In other words, per legacy media, we’re moving toward that big China crash that we’ve all expected for so many years. It certainly didn’t help that a tiny Chinese solar company defaulted on a bond issue a little more than a week ago. That hit the markets like news of a new global bird flu pandemic.

Even worse than bird flu, perhaps, we have news like this, from the British newspaper The Guardian: “Premier Li Kequiang told lenders to China’s private-sector factories they should expect debt defaults as the world’s second-largest economy encounters ‘serious challenges’ in the year ahead.”

While China is “slowing down,” its government is going to build more stuff — roads, bridges, airports, etc.

Recall that old saying, “Buy the rumors, sell the news.” Well, we’re now well past “rumors” of the Chinese economic correction. This “news” is about serious Chinese problems. Loans will default, says one of the top guys in China — where top guys are not known to speak intemperately.

Indeed, over the years, many Chinese companies have bought up physical copper just to store in warehouses. That is, they don’t bend wire or melt metal. They use copper as loan collateral, to get around lending restrictions.

Now we’re in a quandary. Declining copper prices mean that many Chinese firms will write down the value of their copper inventory. Thus, many Chinese companies will face loan calls that they can’t repay. Just like the man said: Whoops.

With this in mind, I don’t blame anyone for getting nervous and hitting the stock market sell button. As in… go to cash and sit on the sidelines for a while. As a newsletter editor, I’m not officially issuing “sell” news, but my caution is that there’s no shame in booking gains, husbanding cash and avoiding losses.

Still, is it totally gloom and doom? Here’s another paragraph from that same Guardian article above: “Figures this week revealed that Beijing is copying the Japanese tactic of ramping up public infrastructure spending to replace the steep slowdown in private-sector investment. Fixed asset investment, a measure of government spending on infrastructure, expanded 17.9% during the first two months of 2014, the National Bureau of Statistics said.”

That’s a horse from a different stable, right? While China is “slowing down,” its government is going to build more stuff — roads, bridges, airports, etc. That, and expand the military budget by over 12%, which implies buying equipment and electronics. So perhaps there’s still hope for the red metal and other components of the periodic table?

It gets back to that question of where are we within the cycle? Let’s step back a bit further. For all the chest-thumping over the recent copper price decline, the metal is still trading in a range that has held up for three or more years. Here’s the chart going back to the 2009 post-crash recovery. 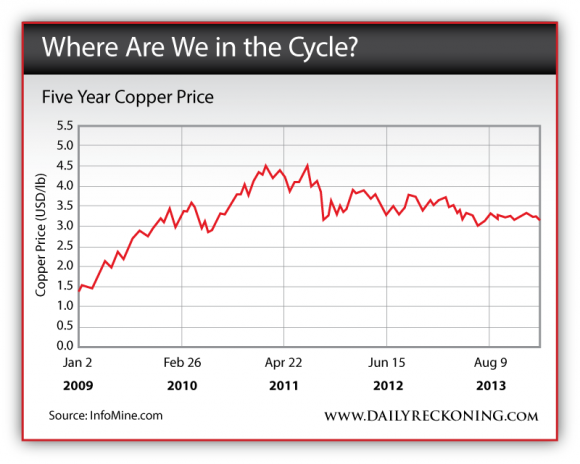 P.S. In today’s issue of The Daily Reckoning email edition, I gave readers an exclusive invite to a special online event, where I plan to reveal a very unique and potentially very lucrative investment strategy — something I call becoming “Texas rich in 60 days”. Just one small benefit of being a Daily Reckoning email reader. If you didn’t get it, you’re missing out on a wealth of great investment advice and special offers just like this one. Sign up for FREE, right here, to make sure you never miss another opportunity.