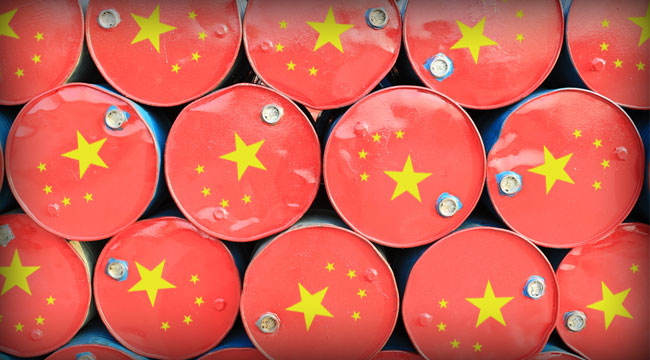 No Politics, No Religion… and No Profit

“The Chinese are the biggest beneficiary of this post-Saddam oil boom in Iraq,” declares Denise Natali at National Defense University.

The New York Times has finally caught on to something we first began spotting in late 2009: China’s making out a lot better from the U.S. invasion of Iraq than the U.S.

Iraq is back to being OPEC’s second-largest producer, after Saudi Arabia… and China is Iraq’s biggest customer.

“The Chinese had nothing to do with the war,” carps Michael Makovsky, a Bush-era Pentagon official, “but from an economic standpoint, they are benefiting from it, and our Fifth Fleet and air forces are helping to assure their supply.”

From the Iraqis’ standpoint, the Chinese are a lot easier to do business with.

“Unlike the executives of Western oil giants like Exxon Mobil,” says the Times, “the Chinese happily accept the strict terms of Iraq’s oil contracts, which yield only minimal profits. China is more interested in energy to fuel its economy than profits to enrich its oil giants.”

Exxon Mobil was the only U.S. player that got a meaningful stake in post-Saddam Iraq… and the Iraqis are pushing XOM to divest because the firm is trying to cut deals with the ethnic Kurds of northern Iraq. That rather upsets the ethnic Arabs running the central government in Baghdad.

“The Chinese are very simple people,” said an Iraqi Oil Ministry official who spoke to the Times anonymously. “They are practical people. They don’t have anything to do with politics or religion. They just work and eat and sleep.”

“There has never been a reasonable explanation given by the U.S. for leading its invasion and occupation of Iraq in 2003,” says James Norman, an oil industry journalist and author of The Oil Card.

“The real reason,” he contended in a 2012 interview with the Geopoliticus blog, “could not be spoken of plainly.” That is, to keep Iraqi oil out of Chinese hands.

“The Saddam Hussein regime had crossed a critical line in the sand when it granted equity ownership rights to vast undeveloped in-ground oil reserves to Chinese state-controlled oil companies in return for development funding and a revenue share.”

More such deals were set to be signed when U.N. sanctions against Iraq were due to expire in late 2003. “The G.W. Bush administration was obliged to act before large numbers of Chinese nationals could be installed in Iraq and the oil deals finalized.”

Fast-forward 10 years… and those large numbers are installed and deals finalized anyway. Just not with Saddam.

Then again, the Chinese might not know what they’re getting into.

“More than 1,000 people were killed in violence in Iraq in May,” says a Reuters story citing United Nations figures, “making it the deadliest month since the sectarian slaughter of 2006-07.”

“Systemic violence is ready to explode at any moment,” warns the U.N.’s special representative in Iraq, “if all Iraqi leaders do not engage immediately to pull the country out of this mayhem.”

Which is not likely: Prime Minister Nouri al-Maliki, a Shiite Muslim, is promising the military will “hunt down” what he calls “outlaws” — that is, Sunni Muslims fed up with the Shiites lording it over them.