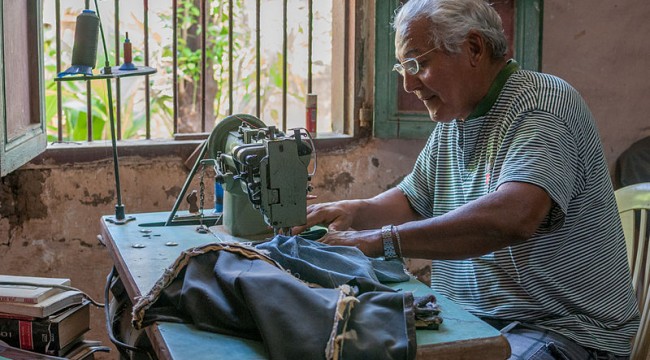 No Jobs for the Young, No Retirement for the Old

We shouldn’t wonder why people are working into their 70s — we should wonder why anyone retires, assuming they’ll still be receiving their full pension in five years.

You may have seen a variation of this chart of employment in the U.S. by age group.

This chart–courtesy of mdbriefing.com— shows the number of those employed (with any kind of job–full-time, part-time, self-employed) as a percentage of the Civilian Noninstitutional Population (CNP), which includes everyone 16 years of age and older who is not institutionalized or on active duty in the Armed Forces. 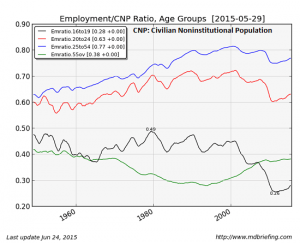 A number of striking features pop out of this chart:

There are many theories as to why youth employment has plummeted while 55+ employment is rising, but demographics and financial insecurity likely play major roles.

Back when Social Security was established, few people lived beyond their 60s. A retirement age of 65 meant most people lived only a few years beyond retirement.

Now people live into their 80s, and medical technologies are enabling many to remain active even in their advanced years.

As people live longer, those reaching retirement age (early to mid 60s) often have elderly parents in their 80s who need care and financial support. People living into their late 80s, once a rarity, are now commonplace.

As the economy has stagnated, financial demands on their own children (in their 30s and early 40s) have increased, leaving many of those reaching retirement age with two generations needing help. Retirement is not much of an option when every scrap of income is needed.

Over the past 35 years, defined pension plans that were once common benefits of corporate employment have vanished and been replaced by 401K plans which transfer the risk to the employee. As the stock market has soared and crashed twice in the past fifteen years, those approaching retirement can no longer trust that their pension fund is secure.

As a a direct result of Fed policy (designed to recapitalize banks at the expense of savers and retirees), those hoping to retire have been forced to put their savings at risk (investing in risky assets such as junk bond funds) or working longer because the low-risk yield on retirement savings are now meager.

The reality is that financial insecurity is rising for everyone heading into retirement. Even state and local government workers are concerned that their pensions aren’t as secure as they were a generation or two ago, as the fiscal imbalances of many local government budgets are the New Normal.

The Federal government can effectively create money to pay Social Security, veterans and federal employee pensions, but there is no guarantee that these pensions will keep up with inflation or not be taxed to oblivion.

One key source of financial insecurity is the growing awareness that the rules will be changed without consent of the governed to preserve the perquisites of the Ruling Class and powerful vested interests.

It would be foolish in the extreme to trust that the Powers That Be won’t change the rules in a heartbeat when their power and wealth are threatened by instability. The Nobility will change the rules and the peasants will pay–end of story.

In this context, we shouldn’t wonder why people are working into their 70s–we should wonder why anyone retires, assuming they’ll still be receiving their full pension in five years.