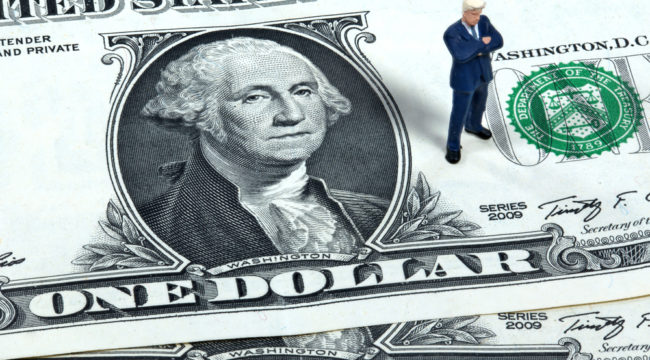 Next Week Could Decide Trump's Presidency

The president is expected to nominate the next Federal Reserve chairman before winging off to Asia next week.

Could his selection determine the outcome of his presidency?

And if he botches it, will Trump join Bush the Elder as the only single-term president in nearly 40 years?

Our colleague Dave Gonigam has examined the relationship between presidents and the business cycle since 1980.

Presidents Trump and Bush the Elder were the only two presidents to enter office inheriting multiyear economic expansions.

Bush donned the purple six years and two months into an economic expansion.

Dave’s researches reveal that the rest of the crop — Obama, Bush the Younger, Clinton and Reagan — all entered office when the economy was in recession, steaming into one, or steaming out of one.

Bush the Elder’s recession waylaid him 18 months into office.

Will Trump be waylaid with his own… and join Bush in the presidential outhouse?

Last November, we offered red-handed evidence that Trump faced a 100% chance of recession not within his first 18 months… but his first 12.

This evidence drew upon executive history ranging all the way to 1910:

Since 1910, the U.S. economy is either in recession or enters a recession within 12 months in every single instance at the end of a two-term presidency… effecting a 100% chance of recession for the new president…

Only two presidents in history did not see a recession, and they were inaugurated after single-term presidents.

Trump’s presidency has now entered its ninth month… and its fifth day.

Our investigations yield no evidence that the U.S. economy is in recession at this time.

If the U.S. economy does not enter recession within the next three months… President Trump will have scotched 100 years of presidential history.

But can he scotch the recent 37?

If Trump wishes to avoid a duplicate fate as Bush the Elder, we suggest he choose his Fed chair well…

As Dave reminds us…

In July 1991, Bush nominated the sitting Fed chairman, who at that point had just four years’ experience in back of him.

“He has done an outstanding job,” gushed Bush the Elder at the time.

“… He’s been a fierce fighter against inflation, but I think he also is as strongly committed to growth,” continued then-President Bush.

Bush was referring to the “Maestro”… Alan Greenspan.

But the president would ultimately eat those words — without salt.

The economy was in recession by March 1991.

And although Greenspan began lowering the fed funds rate from 8% down to 3% by Election Day 1992… Bush thought Greenspan derelict at his duties:

I think that if the interest rates had been lowered more dramatically that I would have been re-elected president because the [economic] recovery that we were in would have been more visible.

And the sting in the tail:

I reappointed him, and he disappointed me.

Will Trump’s pick disappoint him?

As Dave notes, the stakes are even higher for Trump because the Fed is presently undertaking a rate-raising cycle.

To restock its magazines against the next recession… the very recession its rate hikes may produce.

Now… those who bet such things give a 51% chance that Trump will appoint a certain Jay Powell to the position.

Who is Mr. Powell?

A whiskered Janet Yellen — with one minor exception:

“Powell’s main qualification seems to be that he’s just like Yellen except he’s a Republican,” says Jim Rickards.

And greater odds of a recession.

Although the betting line gives it a slender 11% chance, Jim still believes Trump will appoint a fellow named Kevin Warsh.

This Warsh may be Trump’s surest defense against higher rates… another recession… and a seat next to Bush the Elder:

The early read on Warsh was that he is a hawk and will raise rates. But Warsh is a pragmatist, not an ideologue. Warsh will do what makes sense under the circumstances. Warsh is less concerned about inflation than Yellen and therefore less likely to raise rates.

If he can avoid recession for the next three months, Trump will see off 100 years of presidential history.

If he’s to defy the last 37… maybe Kevin Warsh is his man.