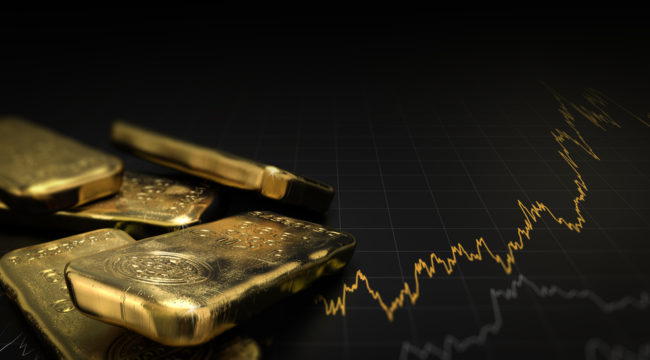 The Next Leg of the Great Gold Rally

Gold stocks also rocketed up before settling back into the current range.

In today’s Daily Reckoning, we’re going to look at how much upside we could experience from here…

Before we look ahead, though, let’s take a brief look back. Below is a chart depicting the past 17 months of gold and mining stock price movement, since the beginning of 2016.

The chart shows the price of gold ($GOLD) versus a well-run exchange traded fund, the Sprott Gold Miners ETF (SGDM). 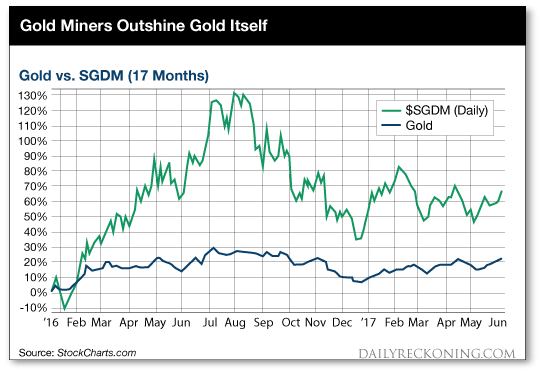 As you can see, miners had a great run in 2016, certainly through August. Since then they’ve pulled back.

But the point is we’re still looking at a healthy market.

Fundamentals are good across the gold mining space. They’re trading in a range for now while markets figure out what happens next.

The recent rally is even more dramatic when you look at how deep in the tank things were back before 2016.

Here’s a similar chart depicting the past four years of price movement using the same comparison: 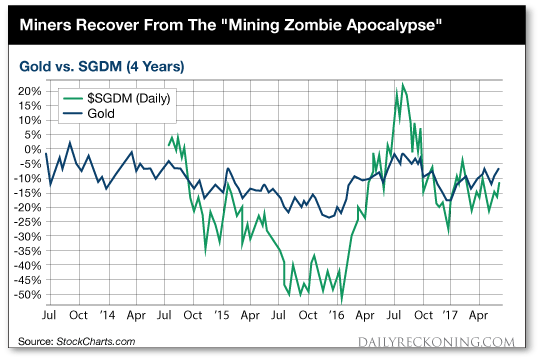 Clearly, gold and mining shares were way down in 2014 and 2015. We lived through a historic bear market — the Mining Zombie Apocalypse, as I call it.

The recovery and breakout between January and August 2016 created a lot of new wealth. Yet the pullback since last August has placed the overall market into a long trading range.

Highs and lows are narrowing, so sooner or later, we’re due for some sort of breakout.

The logical question to ask is what could the upside be from here?

For each of the past 11 years, an investment firm called Incrementum has issued a well-regarded summary of gold entitled In Gold We Trust. The 2017 edition was released earlier this month, and it’s packed with insights making the positive case for gold.

Incrementum’s institutional view is that the gold price turnaround last year “marked the end of the cyclical bear market.” Incrementum pounds the table, figuratively, writing that “the rally in the precious metals sector has probably only just begun.”

To illustrate the point, Incrementum tracked the performance of the six bull markets for gold miners since 1942, using the Barron’s Gold Mining Index. Their data reveals that past bull markets soared into the range of 600–700% gains. Of course, many individual companies performed even better than that.

Based on that history, the bull market for gold that began in 2016 appears to have much more room to run.

Indeed, based on past bull markets, it looks like we’re very much in the early days of our bull market. There’s more beef on the bones of this bull, with dramatic upside ahead.

Aside from historical analogy, consider the current market drivers for gold and miners…

As my partner Jim Rickards notes over and over, we’re looking at higher gold prices for a host of reasons. Indeed, Jim wrote an entire book on the topic, The New Case for Gold.

At the level of the industry itself, gold miners have learned to profit at lower metal prices — comparable to how the oil fracking industry has learned to make money at relatively low oil prices.

It’s all about capital discipline and applying new technology.

At the “macro” level of investment logic, there’s a strong case to be made that it’s time for a cyclical turn of institutional funds into gold mining shares. The reasons are not exactly shocking. Unstable global debt levels, the erosion of the dollar as a global reserve currency and the potential for a looming U.S. recession are serious factors at play here.

Then we have the Fed and its interest rate games. According to the Incrementum report, rising interest rates preceded nearly every U.S. recession going all the way back for 100 years.

“The historical evidence is overwhelming,” say the report. “In the past 100 years, 16 out of 19 rate hike cycles were followed by recessions.” As Jim has explained in the past, gold does well in recessions. Meanwhile, we’re awaiting a Fed rate hike tomorrow.

All of this reminds me of a quote from the great financier Bernard Baruch: “A speculator [is] a man who observes the future and acts before it occurs.”