The Next Financial Crisis Will Be Worse Than the Last One

And if you look at the stock and asset markets, as Donald Trump tends to do (and as Barack Obama did, too), you’d think all is fine with the world.

On the flip side of that euphoria however, is the fact that the median wage rose just 2.4% last year and has remained effectively stagnant relative to inflation. And although the unemployment rate fell to a 17-year low of 4.1%, the labor force participation rate dropped to 62.7%, its lowest level in nearly four decades.

That’s particularly difficult for new entrants to the workforce, such as students graduating under a $1.3 trillion pile of student loan debt. (Not to worry though: Goldman Sachs is promoting a way to profit from this debt by stuffing it into other assets and selling those off to investors, a la shades of the subprime mortgage crisis.)

Those of us living in the actual world aren’t quite as confident as the Wall Street amen chorus. Record-setting markets don’t imply economic stability, nor do 40% corporate tax cuts translate into 40% wage growth.

The Federal Reserve raised rates three times last year. But because it fears additional hikes or larger hikes would cause a market meltdown, each time the Fed acted, it did so by the smallest sliver it could —25 basis points.

As part of its rate-hike-into-strength message, the Fed forecast that the job market and economy will further improve in 2018.

Trump’s appointed Fed leader, Janet Yellen’s No. 2 man, Jerome Powell, will take stewardship of the Fed in February 2018. Policywise, he will do exactly what Yellen and Ben Bernanke did before him, given that’s how all his votes went — albeit while advocating less oversight of the big banks.

The reality is that the Fed and the administration are scared that selling too many bonds back into the capital markets will result in broader sell-offs. That could lead to another credit squeeze and possible recession, not to mention losses for the big banks exposed to those corporations.

Fueled by cheap Fed money and low rates, the amount of outstanding corporate debt has nearly doubled from pre-crisis levels of $3.4 trillion to record levels of $6.4 trillion. 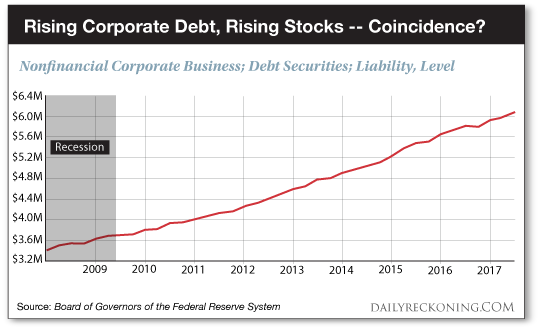 By Oct. 1, 2017, U.S. investment-grade corporate debt issuance had already surpassed $1 trillion — beating 2016’s pace by three weeks. The amount of speculative-grade (or junkier) corporate debt issued during the first three quarters of 2017 was 17% higher than over the same period in 2016.

Altogether, that means that U.S. corporate issuance is set for another record year in 2018.

But as history has shown us time and time again, all bubbles pop.

Until then, certain companies are the equivalent of the living dead. The Bank of International Settlements (BIS), or central bank of global central banks, defines zombie firms as “firms that could not survive without a flow of cheap financing.” The last BIS Quarterly Report labeled one of every 10 corporations in emerging (EME) and advanced countries as a “zombie.”

Corporate debt of nonfinancial U.S. companies as a percentage of GDP has surged before each of the last three recessions. Last year, it reached 2007 pre-crisis levels. It didn’t end well last time. Why should anyone think it’ll end well this time? Plus, now, that debt has been powered by not just the Fed but central banks the world over.

And whereas in the past, companies used some of their debt to invest in real growth, this time corporate investment has remained relatively low. Instead, companies have been on a spree of buying their own stock, establishing a return to 2007-level stock buybacks.

Companies won’t be diverting their money from the stock and bond markets into jobs and wages.

Additionally, the GOP tax bill cuts the corporate tax rate from 35% to 21%. But collectively, large U.S. companies only pay an average effective tax rate of 18% anyway. They only contribute 9% to the overall tax receipts the U.S. government receives each year.

In fact, companies like General Electric haven’t paid any taxes in a decade. But more to the point, the new tax cut is another form of cheap money giveaway. Even Jamie Dimon, chairman and CEO of JPMorgan Chase, concurred.

He called the tax cut a “QE4” (another round of quantitative easing, added to the three rounds the Fed executed over the past decade to reach $4.41 trillion in credit).

Which brings me to my main point, which is this:

All the Fed talk about “tapering” or reducing the size of its book, and even the 75 basis points of rate hikes, are a setup for the next act of the same play.

Since the Fed’s announcement that it was going to stop reinvesting the interest payments on the bonds it’s holding, the size of its book has been about the same. That’s right.

Despite its tapering talk, the Fed’s balance sheet was down a mere $10 billion (an equivalent of a rounding error) last year. Its book of assets remains at $4.41 trillion, a figure equivalent to 23% of U.S. GDP.

I’m not surprised. There’s always a mismatch between what the Fed says and what it does.

And incoming Fed Chair Powell is more likely to keep supplying cheap money than withdrawing it from the markets in the instance of any wobbles.

Financially speaking, it will be a precarious year of more bubbles inflated by cheap money, followed by a leakage that will begin with the bond or debt markets. The GOP tax cuts won’t technically kick in monetarily for corporations until after the year is over in 2019, but the anticipation of extra funds will fuel more buybacks.

This will help to provide cover for any rate hikes the Fed implements, because it provides corporations the ability to boost their own share prices further.

Meanwhile, the Treasury Department, Federal Reserve and other smaller regulatory authorities in Washington will push for greater deregulation of the financial systems and banking industry on any level possible.

If there is another financial crisis in 2018 or later, it will be worse than the last one because the system remains fundamentally unreformed, banks remain too big to fail and the Fed and other central banks continue to control the flow of funds to these banks (and through to the markets) by maintaining a cheap cost of funds.

So the music could play on for a while longer — until it suddenly stops. Then the day of reckoning will arrive. And the full magnitude of the past decade’s errors will become immediately obvious.

Unfortunately, no one in any position of power will do anything to fix any of this.