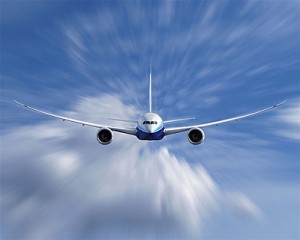 This computer generated handout image received 06 July 2007, courtesy of The Boeing Company shows the exterior of the Boeing 787 Dreamliner. The eyes of the aviation world will be fixed on Boeing 08 July 2007 when the US aircraft giant unveils its 787 Dreamliner, the “green” passenger jet it hopes will revolutionize air travel.The mid-sized plane, which seats up to 330 passengers and is capable of flying long-haul routes using up to 20 percent less fuel while pumping out fewer greenhouse gases, will be rolled out for 300 gathered media.The 787 — Boeing’s first new model in 13 years — will make its maiden test flight later this year before going into commercial service with Japan’s All Nippon Airways (ANA) in 2008. AFP PHOTO/THE BOEING COMPANY/HO/RESTRICTED TO EDITORIAL USE =GETTY OUT=