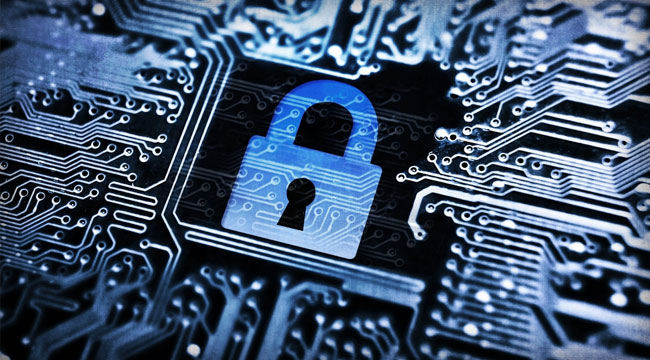 Net Neutrality: The Story You're Not Being Told

Protesters and corporations working together? 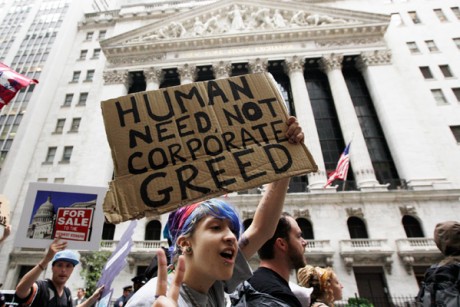 But this week, in an ironic turn of events, the protesters have teamed up with many of the corporations they undoubtedly rallied against.

Why are protesters and corporations holding hands?

In case you missed it, here’s the full rundown of what happened this week…

On Wednesday, you may have noticed this icon on some of your favorite websites…

Websites donning it on their front page were in support of what was called Internet Slowdown Day.

They were fighting against, of course, the evil cable companies.

“Cable companies want to set up toll booths on the Internet,” one activist website reads. “This would destroy net neutrality and ruin the open Internet that we know and love.”

Net neutrality essentially means that all data are to be treated equally. Your Internet service provider (ISP) wants to end that, giving certain websites preferential treatment while leaving others (maybe even yours) to rot. 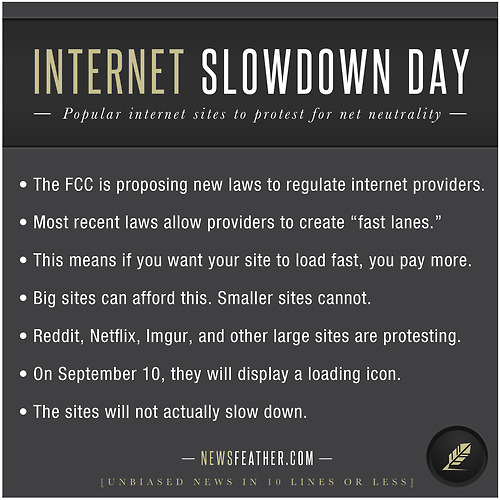 The open Internet rules, adopted in 2010, were created by the FCC to prevent Internet service providers (ISPs) from blocking or slowing users’ connections online content and apps.

And on May 15, the FCC proposed a new “open Internet” rule. This rule would allow ISPs to charge online companies for preferential treatment.

The argument, according to the protesters, is this…

Your Internet Service Provider (ISP), if allowed to create “fast lanes,” would essentially wield the power to pick what websites are accessible on the Internet.

They would be able to block content and rhetoric they don’t like. And reject websites and applications that may compete with their business models…

The Internet would be corporatized. And have the power of full censorship.

He continued: “To get online, you need to use an Internet access provider. But once you’re online, you decide what to do and where to go. Anyone, anywhere can share their opinions freely – and any entrepreneur, big or small, can build, launch and innovate without having to get permission first.”

All of this, according to the protesters, is at stake.

Of course, it’s bad news for all the big-name US streaming and image websites too. Because they use so much bandwidth, they’ll take the biggest hit if they’re being forced to pay for what they use.

That’s why almost all of them — from Netflix to WordPress — took part in Wednesday’s protest.

The result? Not bad

At one point during the day, Congress was consistently receiving 1,000 calls per minute.

The main website, Battle for the Net, tallied the results. On Wednesday… 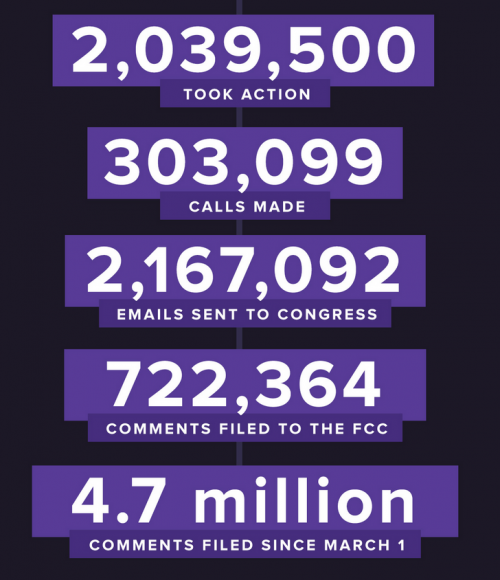 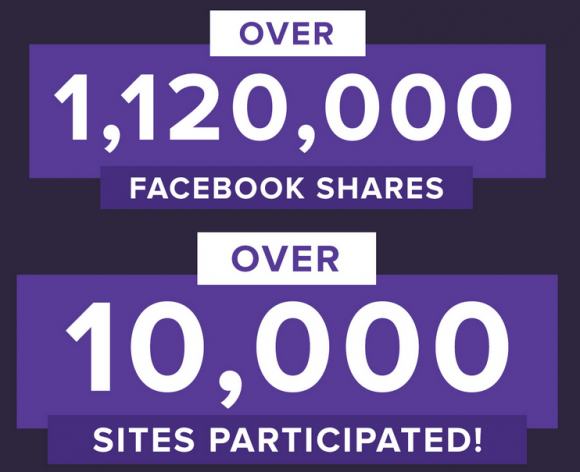 It was everywhere we turned on Wednesday. Here’s how some of the bigger websites protested…

Image website Tumblr used the icon in its main toolbar…

We agree with the message. Keeping an open Internet is extremely important…

But, as reporter Jon Healey pointed out in the Los Angeles Times, there are some important details that have been glossed over in the Battle for the Net protest.

“First,” Healey writes, “nothing in the FCC rules today stops Internet service providers from creating ‘fast lanes’ or ‘slow lanes’…The courts threw out the two previous efforts by the commission to require ISPs to manage traffic on the last mile in a neutral way.”

“We now have an Internet service provider telling content providers that the only way its service can work is if you pay an extra fee.”

He was referring to a deal between Netflix and Comcast. Netflix, Comcast said, was using too much bandwidth. So they decided to choke them out by slowing their website. If you’re a Netflix user, you might recall laggy videos late last year.

We’ll let you puzzle out when negotiations began… and when Netflix agreed to Comcast’s terms… in the chart below. 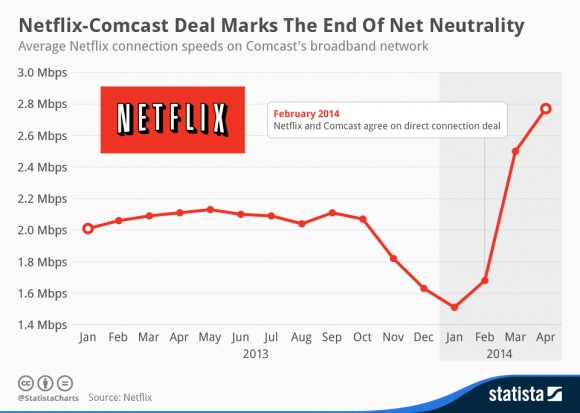 He must’ve practiced that one. Because he didn’t even crack a smile when he said it.

We don’t have to seek far to see that’s total bullsh*t. Most Americans, probably you included, live in a local monopoly, cable-wise.

It’s a running joke here in Baltimore how horrible Comcast’s service is.

We laugh about it because we have to. It’s all we can do to keep from choking cable guys in the streets.

And the frustration isn’t limited to the Charm City.

Take a look at these maps from Consumerist…

Here’s one of Minneapolis-St. Paul… 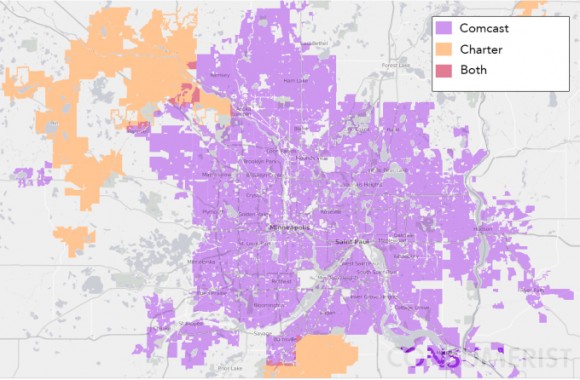 Caption: Quite the competitive and dynamic marketplace, eh?

And one of Los Angeles… 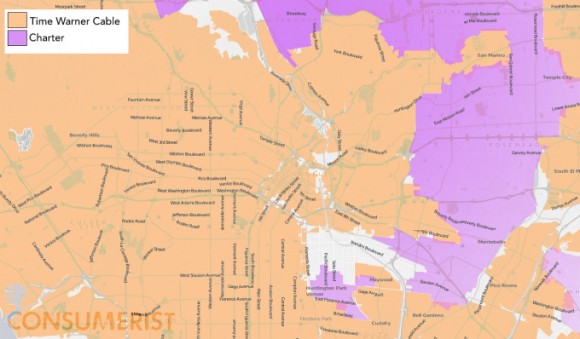 And one more of Boston… 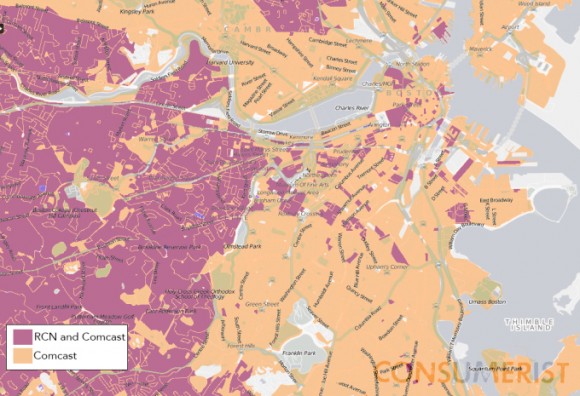 Where else have we seen these patterns? 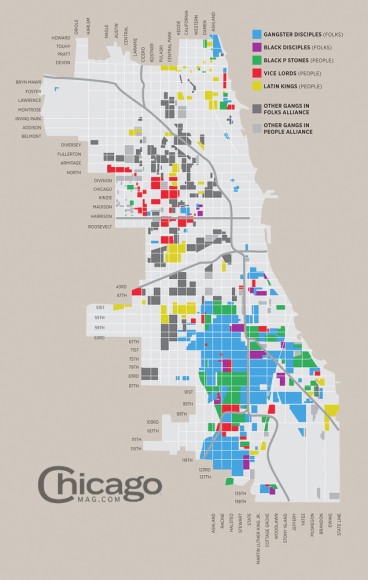 We kid. We kid. Don’t blame the cable companies just yet…

Here’s the story not being told…

“Companies can make life harder for their competitors, but strangling the competition takes government.

“Before building out new networks, Internet Service Providers (ISPs) must negotiate with local governments for access to publicly owned ‘rights of way’ so they can place their wires above and below both public and private property.

“ISPs also need ‘pole attachment’ contracts with public utilities so they can rent space on utility poles for above-ground wires, or in ducts and conduits for wires laid underground.”

“For example,” says Wired, “rights-of-way and pole attachments fees can double the cost of network construction.”

Not to mention all the time and money wasted sitting around waiting for approval. The “little guy” doesn’t even stand a chance to compete.

The real bottleneck, then, isn’t the broadband providers. It’s those who determine what hoops they have to jump through to get approval.

“This reduces the number of potential competitors who can profitably deploy service — such as AT&T U-verse, Google Fiber, and Verizon FiOS. The lack of competition makes it easier for local governments and utilities to charge more for rights of way and pole attachments.

“And it’s essentially a system of forced kickbacks. Other kickbacks arguably include municipal requirements for ISPs such as building out service where it isn’t demanded, donating equipment, and delivering free broadband to government buildings.”

Ed. Note: This article was excerpted from the FREE Laissez Faire Today e-letter, but it’s only a portion of what subscribers got… Meaning, if you like what you see, you’re missing out.  If you want more Laissez Faire Today, signing up is both FREE and simple. And once you’re a member, you’ll never miss a single issue, secret, or untold story. Sign up, absolutely free, right here.