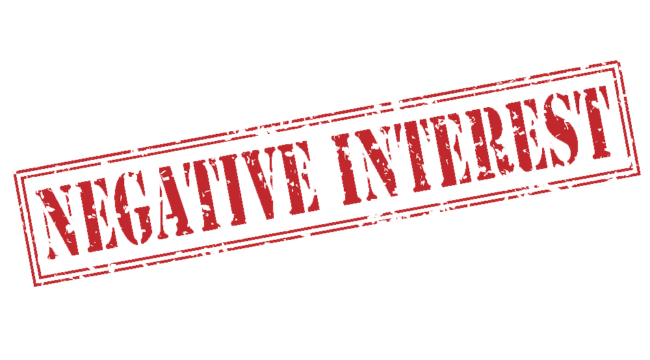 We are often warned that negative interest rates are an approaching menace — not an immediate menace.

Yet are negative rates already reality in the United States? Has the unholy day already arrived?

Today we don the sleuth’s cap, step into our gumshoes… and unearth evidence that negative interest rates are not the future menace… but the present menace.

What is the evidence? Answer anon.

A man sinks a dollar into his bank. Under standard rules he hauls out a dollar and change on some distant date — perhaps $1.05.

These days he is of course fortunate to bring out $1.01.

Yet under negative interest rates he endures a rooking of sorts. He pulls out not a dollar and change — but change alone. The bill itself has vanished.

His dollar may be worth 97 cents for example. Thus his dollar — rotting down in his bank — is a sawdust asset, a wasting asset, a minus asset.

Would you willingly hand a bank a dollar today to take back 97 cents next year? You are a strange specimen if you would.

Yet that is precisely as the Federal Reserve would have it…

It must be forever acquiring, forever chasing rainbows, forever upon the jump.

That is, the Federal Reserve would not allow your money one contemplative moment to sit idle upon its hands… and doze.

The dollar in motion runs down goods and services. It invests in worthwhile and productive enterprises.

The dollar in motion, in turn, sets other dollars in motion… as a careening cue ball sets a rack of billiard balls in motion.

That is, the dollar in motion stimulates — unlike the dormant dollar snoozing in its bank.

Thus the dollar in motion is an undiluted economic blessing.

So runs the case for negative interest rates. Is this case sound?

It is not… as our cold and calculating eye judges it. In these pages we have argued the case to pieces.

We maintain that economic growth rises instead from a bedrock foundation of savings.

An economy built atop this bedrock is a rugged economy, a durable economy.

No passing blow will knock it over.

And savings must precede consumption. Consumption is a consequence of savings.

Yet many economists mistake the rider for the horse… and believe consumption is the way to prosperity everlasting.

We believe it is not. But let it go for now.

Let us instead revisit our question:

Is the noiseless thief of negative interest rates already among us?

A certain Vic Lederman — a financial analyst with Agora affiliate Stansberry Research — claims they are in fact among us:

“Folks, negative rates are here… in the U.S… today.”

But it is a secret jealously guarded:

The biggest banks and money managers have done everything they can to keep this under wraps. They know that seeing negative rates scares people.

That fright is justified — if you cherish your dollars. But what is the evidence that negative interest rates presently exist? Lederman:

These are some of the biggest names in finance. And they all share one thing in common now.

These investment managers are all slashing the fees on their money market accounts. But don’t be fooled. They’re not doing this as a kind gesture.

They’re cutting fees because if they don’t… their money market accounts would show negative yields.

There you have your evidence for the existence of negative rates, the freshly fired pistol billowing smoke:

Simply put, the most basic form of cash savings in the U.S. has effectively turned negative… only to be saved by a cut in fees. That means U.S. rates have, in a practical sense, entered negative territory.

Now, the big money managers sure as heck don’t want you to see this. That’s why they’re cutting fees.

The goal is to make it look like your account isn’t losing money. But outside of this fee reduction, it is…

The craziest part of this is that most mom-and-pop investors have no idea this is happening. And most folks believe that keeping a large chunk of their savings in cash is prudent.

Fees can only be cut so far. So given the current trend in rates, actual losses are likely just around the corner.

So here you have your negative interest rates — not in the future — but the present.

And so there is less joy in heaven this day.

How can you guard your wealth against the corroding acids of negative interest rates?