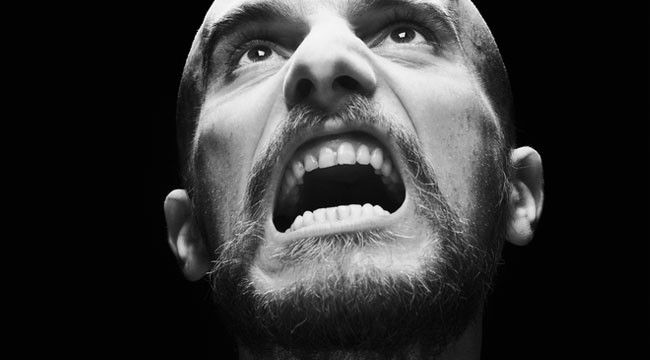 Near the Debt Ceiling, No One Can Hear You Scream

Jacob Lew, the Treasury secretary, just whispered that the next market crash begins no later than mid-October.

Of course, he didn’t say those exact words. But he did report that the Treasury’s “extraordinary measures” to avoid hitting the debt ceiling will be “exhausted in the middle of October.”

The debt ceiling is a legally imposed limit on federal debt. You may remember the 2011 debt ceiling talks and the drama around a government shutdown.

This led Standard & Poor’s to downgrade the U.S.’ credit rating for the first time ever. The market fell more than 15% while all of this was going on from April to August.

Well, we’re looking at something like that all over again as the government’s debt presses up against that ceiling.

Even though Lew’s whispering those words now, soon he’ll begin screaming about it. The budget deficit crisis will likely be front-page news in the month of September as the brinkmanship over the debt ceiling ramps up again. I think we’re in for a rough couple of months.

It gets worse. There’s a second clue that tells us more about the upcoming collapse.

By mid-October, the Federal Reserve’s purchases should be approaching 140%, by his calculations. This is clearly absurd and can’t go on forever. (If for no other reason than the Fed will eventually own the entire federal debt market. As it stands now, it owns about a third of it!) When it ends, interest rates will likely rise. That could also bring the easy-money party to a close.

Ironically, right before Labor Day weekend, the government issued its revised GDP numbers. It claims the economy grew at an annual rate of 2.5% for the second quarter. This was a 47% boost from the initial government estimate of 1.7%. Officially, the government is telling us that the economy has now completely recovered from the 2008 crisis. Economic activity is now higher than it was at the 2007 peak.

What’s most interesting is the contrasting picture of a glowing GDP report with everything else.

There is a lot of nonsense in economic reporting, and GDP is the worst of all. (Williams himself admits that GDP “remains the most worthless and most heavily politicized” of the government series.) But let’s look at something that’s harder to fudge: median household income. See the chart below. 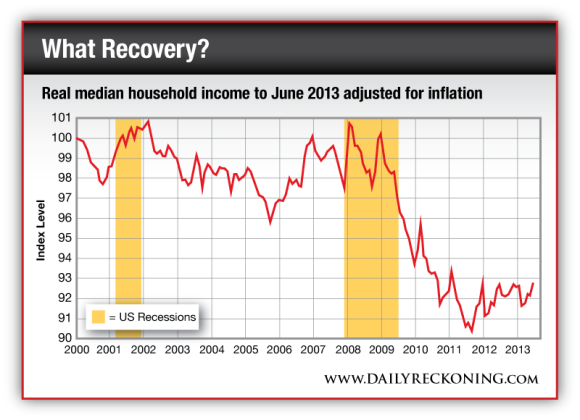 If you look at that, you don’t see any recovery. And these are the government’s official numbers. The point is there has been no full recovery.

Let’s put these clues together. We have another fiscal crisis imminent with a looming debt ceiling drama. We have a Federal Reserve that is already doing a huge and unsustainable amount of “stimulus” buying. And we have an economy far weaker than it’s been in more than a decade despite the bluster over GDP.

The bigger concern is that the market doesn’t have any of this priced in at all. It’s true that August was the worst month for stocks since May 2012. Yet the market fell just 3.1% and is only 4.5% off its all-time high. That’s barely a scratch.

What’s odd is that the stock market has pushed higher this year — putting in a new all-time high on Aug. 2 — even though earnings growth has clearly slowed. Earnings growth for the S&P 500, a broad proxy for the market, was up just 2% for the second quarter. That was all due to the financials (banks, insurers). If you take them out, earnings actually fell 3%. Analysts have been adjusting their estimates. Earnings growth for the third quarter is now just 3.7%, versus 6.5% at the start of the quarter — a 43% correction!

Slowing profit growth and rising market mean valuations have climbed. Bloomberg reports that “Valuations last climbed this fast in the final year of the 1990s technology bubble, just before the index began a 49% tumble.” I don’t think we have that big of a decline ahead of us, simply because we’re starting at a much lower valuation. In 1999, the market went for 30 times earnings. Today, it goes 18 times earnings. That’s still a high number, reflective of too much optimism about future growth.

Most still see earnings and the economy growing briskly in the back half of the year. Barron’s recently polled 10 of the most influential Wall Street seers. They project 8% earnings growth in the second half! When it becomes obvious that is a fairy tale, the market is going to be in for a shock.

Keep your powder dry and your portfolio small.

After reading the above, you might be tempted to sell everything and wait for the storm to blow over.

I don’t think you should.

First off, we have to realize that all of the above analysis could prove way off. Maybe Congress raises the debt ceiling without a hitch, buying more time. Maybe the Fed pulls some new rabbit out of its hat, buying yet more time. Besides, guessing at what the market is going to do is just that — guessing. Humility before an unknowable future is the first step toward any sensible investing strategy. The only thing we can really do is to decide what risks to take.

Second, while I think now is a time to be cautious — simply due to the relative scarcity of cheap stocks — I don’t think you should let market worries put you off a solid long-term investment plan. As Marty Whitman once said, “You make more money sitting on your ass.”

In other words, you’re often better off doing nothing and holding onto good companies growing their net asset values over time, rather than trying to play market timer.

So we will continue to invest in what cheap plays we find.

That said, I do have a few cheap plays in mind. You might know them as part of the “Chaffee Royalty Program”. Back in 2002, every $1 invested in this program was safely turned into $50. It was an investor’s dream come true.

Then, in a flash, the program was closed. New members were cut off. But now, 11 years later, “the “Chaffee Royalty Program” has been unlocked again. Simply put, these royalty plays can change your portfolio forever. The older you get, the more likely you are to want some key regular income streams to feed your retirement lifestyle.

So, why “Chaffee” royalties?

Well, Jerome B. Chaffee didn’t make enough as a schoolteacher. So he took a job as a sales clerk in a dry goods store. Then he took that money and started a dry goods store of his own. When that wasn’t enough, he packed his bags and went to Colorado in 1860.

See, Colorado then — as right now — was resource rich. And even though Chaffee knew next to nothing about mining, he saw the possibilities. So he snapped up the “royalty rights” on as many gold and silver claims as he could afford.

Heard of Franco-Nevada? That’s a company that operates just like Chaffee did. It delivered a 50-fold return.

Well, I’ve found four such companies — ready to grow up to be big billion-dollar players like Franco-Nevada. They are set up similarly to how Chaffee did it back in the 1860s. And just like Chaffee did, they focus especially on commodities: metals, oil and gas, and agriculture.

With these plays, you’ll get royalties coming in on resources already discovered. Plus, there’s also potential for more discoveries down the line at each of these players. By owning a piece of the royalty rights, you’ll be locking in those future income streams too.

When these resource owners of these companies invest more money to expand their operations, you also automatically own a piece of that expansion. Without investing another dime.

And if another breakthrough discovery occurs on one of their properties? The royalty rights shareholders own a piece of that too. Plus, expect a bump in price for the royalty company’s shares.

Buying shares of resource royalty companies is like owning an option on the resource boom. You get all the future upside gains at a much cheaper entry price. And without any of the major downside headaches that come from owning, say, a tiny gold exploration company.

As long as these drilling or mining operations are producing, the royalties roll in year after year. And with the companies I’ve found, you have access to “long haul” deals that have as many as 25–30 years of production left. Plus, here’s the best part. Not all royalty companies are resource companies!

All of these royalties have plenty of time to pile up pretty high. In other words, you could start benefiting from the royalties immediately. And then keep on collecting for many, many years to come. All while even more royalty rights get added to your share of the overall portfolio.

P.S.  In today’s Daily Reckoning email edition, I gave readers an exclusive chance to get in on this Chaffee Royalty program. It’s just one of the many benefits you get by being a free subscriber to The Daily Reckoning. Not a subscriber yet? Sign up for free, right here.