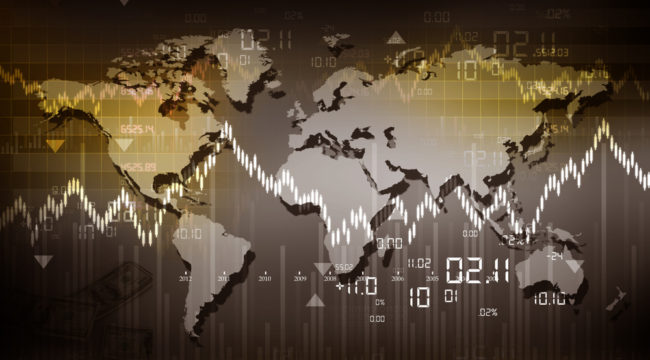 “We Are Moving Into a New World”

And it’s reporting an ominous breeze… one that could signal a dramatic shift in the weather. Soon…

“For only the third time in its existence (it was created January 2013),” observed analyst Peter Tchir late last week, “[the Treasury VIX] has closed below 3.95.”

“Each of the last two times that the Treasury VIX closed below 3.95,” Tchir adds, “10-year Treasury yields headed sharply higher.”

If it’s right… and bond yields are heading “sharply higher”… it also means bond prices are heading sharply lower (they move in opposite directions).

So… Is the Treasury VIX telegraphing the unwinding of the great bond bubble?

It’s been unrestricted warfare on interest rates for eight years running. Yield-starved investors have been herded into longer-term Treasuries that offer something. And it’s created a massively overbooked trade.

Since 2009, the long-term government bond market has more than doubled, to about $6 trillion, affirms Bloomberg.

“There were too many investors on one side of the boat,” says Bryan Whalen, portfolio manager at TCW Group. They assumed the Fed’s blessings “were going to last as far as the eye could see.”

But what the Fed giveth, the Fed taketh. Many investors have been heaving government bonds overboard lately. And “this recent sell-off,” Whalen adds in perfect math-major English, “is kind of just the beginning.”

“Signals from policymakers are raising the prospect of a bond market retreat. Federal Reserve Chair Janet Yellen this month laid out arguments for keeping policy accommodative, hinting at letting the economy run hot… There’s mounting evidence that inflation is starting to stir, just as some central banks hint that higher long-term interest rates may be the key to boosting growth.”

The I-word — inflation. It’s out there. Lurking. And longer-term Treasuries suffer under inflation. Hence the sell-off?

Two weeks ago, Bank of America Merrill Lynch said government bond funds saw their largest outflow of 2016 — that’s the most in four years.

It’s not just here. Bond yields have been slinking higher in Britain, Germany and even Japan. Mark Carney, Bank of England kingpin, beats a drum for inflation when saying he’s “willing to tolerate a bit of overshoot in inflation over the course of the next few years.” Sounds lots like Janet Yellen’s recent yapping.

That’s partly why The Telegraph’s Ambrose-Evans Pritchard is warning that inflation is “next year’s ticking time bomb” in Britain.

The German 10-year bond now yields a positive 0.007% — microscopic — but positive. It was negative for much of the summer. Meanwhile, Japanese even government bond yields are showing murmurs.

“It is far from clear that the shift is yet upon the world,” tempers The Wall Street Journal. “But there are glimmers that it is coming.”

The salmon-colored rag — The Financial Times — has even taken to asking, “Have We Crossed the Inflation Rubicon?”

The broader economy finds itself in a blind alley after eight years of heroic monetary policy. So that leaves government spending, helicopter money, what have you, to pick up the standard and sally forth…

“People have gone from believing stimulus is evil, and you should balance your books to the realization that nothing is working,” says Mike Riddell, fund manager at Allianz Global Investors.

“A growing number of investors and policymakers, seeing central banks as powerless to revive an anemic global economy, are championing a resurgence of fiscal spending,” croaks the Journal’s Jon Sindreu.

One of those policymakers is Treasury Secretary Jack Lew. He said last month that officials are “no longer debating growth versus austerity, but rather how to best employ fiscal policy to support our economies.”

Put the piffle about austerity to one side. The point is they’re already pinning their hopes on “fiscal policy to support our economies.” Only the details remain.

And so, in the words of Guy Monson, chief investor at Sarasin & Partners, “we are leaving this very certain, very comfortable investment environment.”

And, he adds, “we are moving into a new world.”

Maybe. But what kind of world?

Janet Yellen and her mates at the other central banks are hot to let inflation run… and longer-term interest rates rise. But they might want to chew over this toothsome morsel: A Bloomberg Barclays sovereign-debt index says even “a one-percentage point increase in interest rates equates to $2.1 trillion in losses for global investors.”

We wrote recently about how stocks and bonds are joined at the hip these days:

“One of the consequences of eight years of central bank easing and intervention is that these asset classes are tightly correlated.”

Both stocks and bonds are expensive. So… if the bond market unwinds… could that tight correlation mean it takes stocks with it?

We don’t know. But if the Treasury VIX is right and bond prices are about to drop, we could soon have our answer.