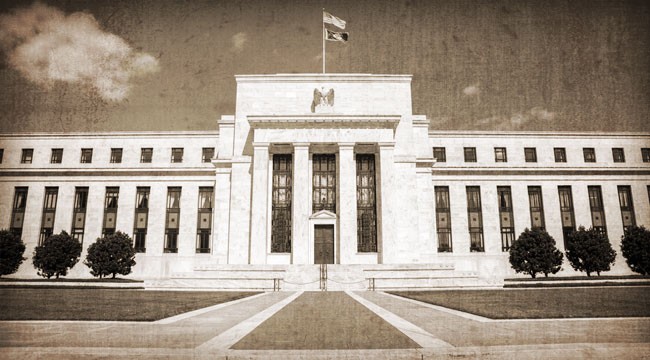 The Movie They Should Be Talking About

I was having a dream. A wonderful dream, a magical dream where beautiful Hollywood starlets were pleading to seduce me, en masse, in return for giving them leading roles in my next blockbuster film, “The Federal Reserve Is Eating Topless Pole-Dancing Vixens Alive, And Horribly Destroying The Rest Of Us, Too.”

It’s a sad tale of monetary insanity where the Federal Reserve created so incredibly much excess money and credit. It’s perhaps even tragic, and which is why the film was initially titled “The Federal Reserve Is Slowly Eating You And Your Children Alive,” which could be more or less tragic, depending on your perspective towards children, and how they grow up as insatiable mutant parasites, always wanting something from you, like “love,” and “quality time” and picking them up from the dentist or some dumb soccer game, when what they REALLY want is for me, I mean you, to cough up increasing amounts of cash and backbreaking debt supporting them, year after year after year, growing more and more surly, until you can’t remember a time in your life when you were not miserable and wondering aloud “Oh, Death, where is thy sting?” Perhaps plague-like in many respects, one could say.

And then later, when they are adults, they want to come back “home,” dragging spouses and children along, to live in their car, parked in your driveway, plugged into YOUR extension cords and using YOUR electricity to heat their electric blanket at night and run their stupid hotplate all day, and always knocking on the door, wanting to use the bathroom, or beg for food, or something. Always something.

But I realized it was a clumsy title anyway, and likely to be mistaken. And it did not convey the vital message of how the prices of things, most tragically food and energy, go up because of the creation of excess money and credit, and how it destroys the people and the economy.

Well, actually, that’s a lie. The vital message of the film is that it contains many scenes of scantily clad young ladies prancing about, dressed only in their scandalous dainties, for no particular reason at all, except to heavily target the teenage-boy demographic so as to maybe, you know, make a few bucks out of this movie thing.

Nevertheless, the OTHER vital message is that the price of things DO go up when the money supply goes up. For instance, the money supply has been steadily going up since 2003, to pick a date at random, and now the price of a one-day adult pass to a Disney attraction is going up in price again, to about $100, which is a doubling in price since 2003.

Think about the implications if you are considering retiring! In twelve years of the money supply expanding and things constantly getting more expensive, the prices of things double! And if you live another twelve years, prices will double again! Yikes! How does THAT impact how much money you have to save every year?

And then I read something, somewhere, somehow, as I dimly remember it, associated with DailyReckoning.com, in an interview with Alan Greenspan, the evil satanic monster who started this whole “insane creation of cash and credit” somewhere around 1987. He was asked, as I recall, about the current fad of bemoaning such huge disparities in wealth, where a small minority of people owns such an overwhelming majority of total wealth, while the vast majority of people have little, if any, wealth at all.

And you wouldn’t have any wealth, either, if you capitulated to your kids whining about how you are the most tight-fisted, stingiest and most hateful parent in the world just because you won’t buy them some new toy, or clothing fad, or medical “treatments” by some quack doctor who think all their problems are mental, and are all caused by me being a dysfunctional and clearly crazy whack-job, driven madly incoherent from the knowledge that the evil Federal Reserve has created, and is creating, so much excess money and credit, and the horrible, terrifying things that are going to happen because of it. How could it NOT drive me crazy?

But getting away, for the moment, about what a lousy father and husband I am, and back to the wide disparity of wealth thing, Greenspan said (get this!) that the Federal Reserve had “nothing” to do with it! What?!?!? The mind reels!

This, then, is where I am shown that I cannot be trusted to interview someone who says something like this, because I would have snarled as I leapt across that table, grabbed him by his ugly necktie to haul his nasty little face up close to mine, so that I could scream at him at the top of my Outraged Mogambo Outdoor Voice (OMOV), replete with foul flecks of sour spittle flying out of my mouth, getting on his glasses and hitting his sprinkling his face, making it all the more disgusting and surreal.

I would scream “Then just from where in the hell did all the oceans of money and credit come, to first create, and then bid up the prices of, all that so-called ‘wealth’ in the first place, if not from the damnable Federal Reserve, which is the only place it CAN come from, you lying, creepy little man?”

Of course, he would stammer and wiggle, and try some of that famous Greenspan double-talk, and I would laugh — hahahaha! – loudly and scornfully — with maximum disdain! — at his vile treachery.

Yes, laughing, even as the economy crumbles around me, the disparity of wealth being only ONE of the cancerous, bloated, mal-invested things caused by the monetary treachery of the Federal Reserve under Greenspan, continued by Bernanke, and now by Yellen, as evidenced by Michael Lombardi at profitconfidential.com compiling a few dismal economic nuggets, such as the National Association of Realtors data showing that home sales are declining, that the Fed bank at St. Louis reports falling orders for durable goods at U.S. manufacturers, and that, predictably, the Census Bureau reports that inventories are rising (i.e., things are not getting bought).

This could explain why the Institute of Supply Management Purchasing Managers’ Index (PMI) fell to an inching-along reading of 53.5 this past January, which is painfully near the index’s 50 cutoff between business expansion and contraction.

That rate of decline to “economic contraction” reading of less than 50 is worrisomely rapid, and Mr. Lombardi apparently agrees with me, and notes that the index is “down from 58.1 in August of 2014.” The economy is (gulp!) collapsing.

This decline of manufacturing activity may explain how, as newsletter writer Mark J. Lundeen shows, electrical usage amazingly stopped growing in 2008. The last seven years of non-growth is the longest, by far, decline in total electricity usage since 1930. 1930!

As Mr. Lundeen says, that while economic growth is always talked about in dollar terms, “electrical power consumption is a real world measurement of economic growth,” which seems to fit the data pretty good, as far as I can see.

Maybe a little TOO good, if you are one of us unfortunate folks who see calamity at every turn because you are aware of the horrible long-term effects of moronic, debt-besotted Keynesian “stimulus” stupidities.

And Junior Mogambo Ranger (JMR) Phil S has been sending me scary articles about the dramatic decline in the Baltic Dry Index, which is an index of shipping costs. This measure of ocean shipments has plunged to new lows, heretofore undreamt of, which is the point where transport ships are being actually dismantled due to oversupply of ships and lack of goods needing to be shipped.

Which, since you seem to be asking, is where we are, Right Freaking Now (RFN).

This all seems to me, Phil, all Junior Mogambo Rangers (JMRs) and family members who know better than to dare to disagree with me about anything, to be Bad News Indeed (BNI), on the order of something very, very, VERY ugly and horrifying, which is exactly what you would expect, because ugly and terrifying is what has always happened in the entire economic history of the world for the last zillion years when governments acted so irresponsibly! Hahahaha!

Yes, I again laugh, because it is obvious from the preponderance of historical examples (100% certainty) that this whole Keynesian lunacy would fail, and the economy would end up in catastrophe.

Which brings us to the Fabulous Timeless Mogambo Advice (FTMA) to buy gold and silver, which will become invaluable in terms of worthless paper currencies, which is another 100% certainty of the last couple of thousand years.

And with the sheer, staggering tonnage of longitudinal evidence like that, you would have to be a complete idiot, even more idiotic than I am, or more idiotic than my wife for agreeing to marry me in the first place, not to buy gold and silver bullion with a reckless, all-or-nothing abandon usually reserved for imminent life-or-death crisis situations.

And, you will be happy to know, fate is indeed smiling upon you, so that you can just walk in and buy the stuff at bargain prices, right now!

Mogambo Guru
for The Daily Reckoning

Why Is Gold Tanking?

Jim Rickards shows you why the dystopian novel “1984” is now reality in China, and why it could ultimately come to the West…

A bloodbath on Wall Street today…