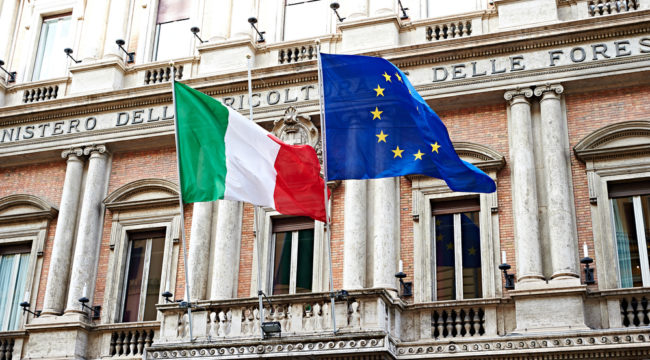 “The Mother of All Systemic Threats”

Another crack forms in the globalist edifice…

And why is it so potentially serious?

The proximate cause of yesterday’s panic was the ongoing warfare between localism and globalism.

This time in Italy.

Mercy forbids us from inflicting the grisly details of parliamentary politics upon you.

Inconclusive elections in March have stalemated the Italian government.

And this Sunday, Italian President Sergio Mattarella vetoed the nomination of an anti-EU economic minister.

This anti-EU fellow was proposed by the populist Five Star Movement — Italy’s largest party — and the right-wing League party.

Both parties hold the European Union in what can charitably be termed… low regard.

President Mattarella proposed his own economic minister, an EU drummer.

The Five Star Movement and League party in turn blocked this eurocrat’s nomination.

New elections are scheduled for July.

We are loathe to exaggerate… or exaggerate much, anyway.

But many believe the election could throw the European Union’s future into doubt.

“This could be the straw that breaks the camel’s back in the case of prospects for Europe,” warns Chris Rupkey, chief financial economist at MUFG Union Bank.

Markets are concerned the anti-EU parties will form a winning coalition that could hold a referendum on leaving the EU — “Ital-exit” essentially.

And an Italian defection could spread to Spain. Then Portugal.

From there… who knows?

Anti-EU rumblings have been heard in France, for instance.

Despite its problems, Italy is no small fry like Greece.

And what happens in Italy… might not confine itself to Italy.

“Political uncertainty in Italy has unhinged world markets,” confirms CNBC, “raising the specter of a euro crisis that could ripple across the global economy.”

Government bonds from other eurozone nations also fell yesterday — which does not indicate investor confidence.

But why did U.S. bank stocks stagger so badly yesterday?

We reduce the answer to one word, hinted at above:

And Italy’s bond market — which reflects its crippling debt levels — is the world’s third largest.

Many banks have borrowed against that debt… or have indirect exposure.

For these reasons an Italian banking crisis has been called “the mother of all systemic threats.”

If these banks sink, they could send out rippling waves of failure… like a boulder plunged into a shallow pond.

As the 2011–12 eurozone crisis demonstrated, the nightmare is a self-reinforcing downward spiral. Lower sovereign bond prices (and thus higher yields) weaken bank stocks and bonds, which results in a pullback in lending and capital market losses. That in turn undermines economic growth, which lowers tax revenues, further drops government bond prices and raises borrowing costs as politicians are forced to consider bailing out banks. U.S.-based banks risk getting caught in the crossfire because of their European asset holdings.

Jim Rickards is no stranger to banking crisis.

Jim was lead counsel for Long Term Capital Management when the hedge fund found itself at the center of a global banking crisis in 1997.

Jim helped negotiate the deal that essentially bailed out the Wall Street banks.

That experience led him on a multiyear pursuit to determine the origins of financial crises… and how they spread.

What does Jim see today?

“Today,” says Jim, “systemic risk is more dangerous than ever. Too-big-to-fail banks are bigger than ever, have a larger percentage of the total assets of the banking system and have much larger derivatives books.”

(See below for more.)

But will Italian voters tolerate additional bank bailouts while their stagnant economy limps on one leg?

And will another bailout drive Italian voters into the waiting arms of the anti-EU parties?

We thus find the forces of globalism and populism in renewed collision.

Brexit didn’t sink the euro because Britain was never on it.

Italy is an equine of a different shade and hue.

It is the fourth-largest economy in Europe.

If Italy drops the euro it goes into history’s paper basket, where it joins the failed currencies of the past.

Then the curtain falls on the entire European project.

We don’t suspect it will happen — we believe Italy will remain on the euro.

And the crisis will pass.

This crisis will pass, we should clarify.

The ongoing war between globalism and populism will not…