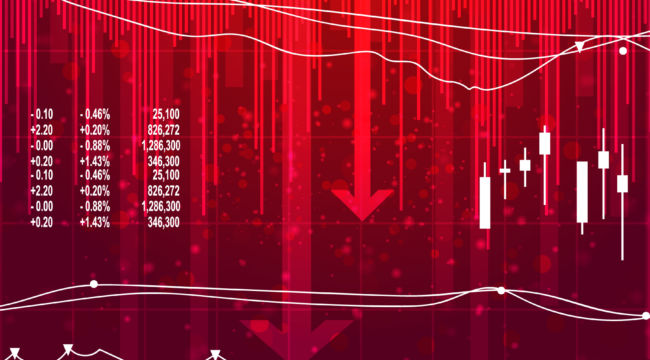 The Nasdaq worked a slight gain… but the bears won the day’s combat by majority decision.

The averages roared back today. But what accounts for yesterday’s loss?

U.S. retail sales recorded their biggest drop in more than nine years in December as receipts fell across the board, suggesting a sharp slowdown in economic activity at the end of 2018. The shockingly weak report from the Commerce Department on Thursday led to growth estimates for the fourth-quarter being cut to below a 2.0% annualized rate.

(Q4 GDP was originally scheduled for Jan. 30 release. The government “shutdown” has delayed it.)

Goldman likewise revised its forecast to 2.0%.

Even the Federal Reserve’s Atlanta outpost — notorious for its comically optimistic GDP projections — hacksawed its previous estimate nearly in half.

But what about internet retailers? Is not the internet displacing the brick-and-mortar shop? Maybe they took up the slack.

Alas… they did not.

“Truly a surprise” is how National Retail Federation (NRF) chief economist Jack Kleinhenz described the results — “in contradiction to the consumer spending trends” in previous operation.

To what foul causes do we attribute the latest retail slippage?

It appears that worries over the trade war and turmoil in the stock markets impacted consumer behavior more than we expected. There’s also a question of whether the government shutdown and resulting delay in collecting data might have made the results less reliable.

But could the weak numbers simply indicate recession?

Like a man halfway into a minefield alerted to his situation only after an explosion astern… recessions begin six to 12 months (or more) before economists can identify them.

One omen of looming recession is slackening industrial production.

We are informed this morning that United States industrial production sank 0.6% last month — the first drop in eight months.

Analysts had forecast a 0.1% gain.

Trade war, an overall global slowdown and a hefty dollar are the explanations in general circulation.

Is weakening industrial production another straw in the wind, a foreshadow of recession?

The 0.6% drop in industrial production in January was as disturbing as the drop in retail sales in that it was so broad based.

Meantime, the unemployment rate sank to a 3.7% low in September. It has been on the creep ever since, like a thief on tiptoe.

January’s reading came in at 4%.

As we explained this week, data from the National Bureau of Economic Research indicates recession is often on tap nine months after unemployment bottoms.

It has already backed off its rate hikes. The most recent retail sales data will likely keep it on ice.

Until [yesterday] morning, Fed official hesitance to hike further was based on risks emanating from global growth and from financial markets, despite a strong domestic outlook. The decline in retail sales calls into question the domestic growth assumption.

But will the Federal Reserve soon return to cutting rates?

The futures market says its next move will likely be a rate cut — not a hike.

But as we also explained recently, watch out for the next rate cut.

The past three recessions struck within three months of the rate cut that ended a hike cycle.

For reasons we need not look far…

Monetary policy runs to a lagging schedule of perhaps 12–18 months.

The impact of previous tightening is not immediate. Once the economy absorbs its full effects, the numbers give off their alarms.

The monetary authority then decides it must cut rates once again.

But it is too late.

Recession has already been “baked into the cake.” And the cake is contracting.

We expect the pattern to hold.

You can therefore expect recession within three months of the next rate hike.

We could be wrong, of course. But we could also be right…

Below, Jim Rickards shows you why multiple risks are converging on the economy at once. Does the U.S. face a “lost decade”? Read on.