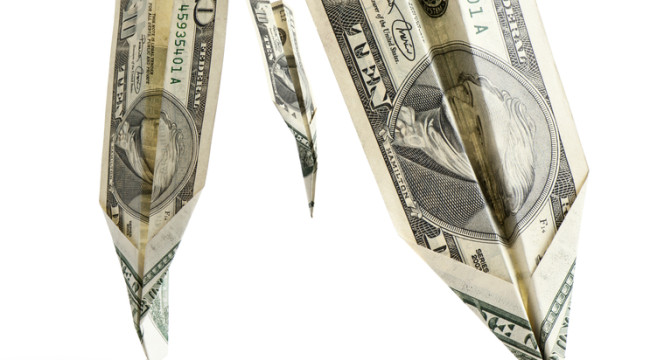 Money Velocity Is Crashing - Here's Why

The inescapable conclusion is that Fed policies have effectively crashed the velocity of money.

That the velocity of money has been crashing while the money supply has been exploding doesn’t seem to bother the mainstream pundits. There is always a fancy-footwork explanation of why whatever is crashing no longer matters.

Take a look at these two charts and tell me money velocity doesn’t matter.First, here’s money supply: notice how money supply leaped from 2001 to 2008 as the Federal Reserve pumped liquidity and credit into the economy, and then how it exploded higher as the Fed went all in after the Global Financial Meltdown. 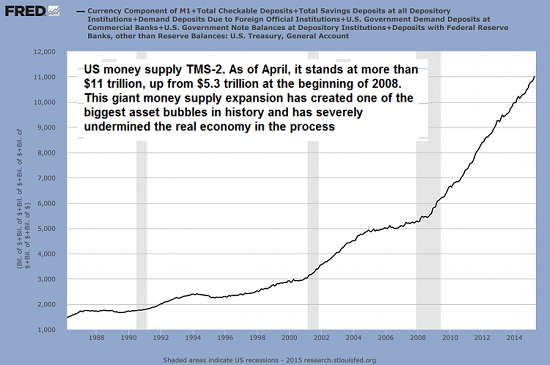 Now look at a brief history of the velocity of money. There are various measures of money supply and various interpretations of velocity, but let’s set those quibbles aside and compare money velocity in the “golden era” of the 1950s/1960s and the stagflationary 1970s to the present era from 2008 to 2015–the era of “growth”: 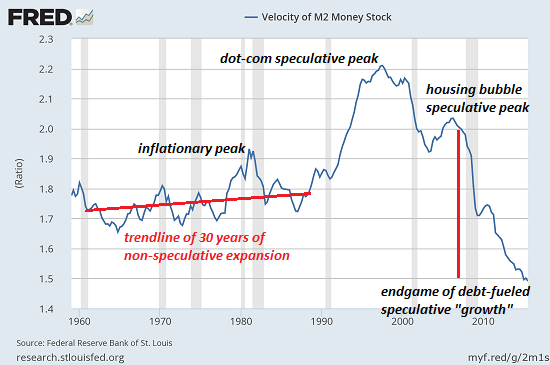 Notice how the velocity of money remained in a mild uptrend during both good times and not so good times. The inflationary peak of 1979-1982 (Treasury yields were 16% and mortgages were 18%) generated a spike, but velocity soon returned to its uptrending channel.

The speculative excesses of the dot-com era pushed velocity to unprecedented heights. Given the extremes in velocity, it is unsurprising that it quickly fell in the dot-com bust.

The Federal Reserve launched an unprecedented expansion of money, credit and liquidity that again pushed velocity up in the speculative frenzy of the housing bubble. But note that despite the vast expansion of money supply, the peak in the velocity of money was considerably lower than the dot-com peak.

Rather, the inescapable conclusion is that Fed policies have effectively crashed the velocity of money. How is this possible?

“You know how you say that the economy is locked up in fiefdoms, and they’re picking winners and losers, as part of colluding the prices? Well this adjustment of prices locks out certain people, like say, the young from housing. So houses don’t sell, they stagnate.

But what are we really looking at? Velocity.

Velocity is an indicator that buyers and sellers agree on a price, that the price is “right” and not an outlier. That’s why you see a stock move on high volume “confirming” the move, because it means the prices wasn’t “right” at the previous level, while more people agree the new price is fair.

If prices are allowed to go where they need to without pressure and manipulation, you will always have velocity, as the most buyers and sellers will always agree at some price. Because this is true, low velocity cannot happen in a free market. Which means the only reason for low velocity (in this or the previous Depressions) is that someone has somehow managed to get an edge that prevents them from selling, from liquidating, at the true price, i.e. the one the buyers will agree to.

So yes, the Fed, the governments, the insiders can manipulate to their heart’s content, as they’ve been doing, but that unnatural pressure goes somewhere. And the pressure diverts into velocity. As we saw in the Great Depression, or the Roman Empire, velocity can stagnate for 10, 20, or 1,000 years until the manipulation ends, property rights are restored, and we have a free market.

History has shown that may be a bargain they’re willing to make, but it won’t do the rest of us a lot of good.”

Thank you, Eric, for an explanation that intuitively rings true. Manipulating the PR optics (i.e. perception management) as a substitute for an open market doesn’t make you omnipotent, it makes you a hubris-soaked fool.