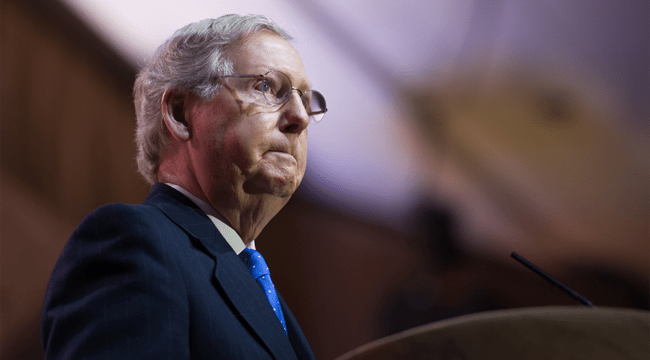 This we learn from exultant Sen. Christopher Coons, Delaware Democrat:

Mitch McConnell blinked and it allows us to spend from here until November focused on finalizing the Build Back Better plan… So I think that’s progress.

We are certain he does. He likely believes his party has taken the Senate minority leader for a lovely sleigh ride.

Meantime, former President Trump has seized his ruler… and given Sen. McConnell a severe knuckle-rapping:

Looks like Mitch McConnell is folding to the Democrats, again. He’s got all of the cards with the debt ceiling, it’s time to play the hand. Don’t let them destroy our Country!”

The sitting Delaware senator — and the former United States president — refer of course to the debt roof.

The United States Department of Treasury presently pegs along on a lean, lean purse.

Janet Yellen would shake out any remaining pennies later this month, absent congressional agreement to muscle the debt roof higher…

Thus we are warned:

NBC News… for example… labels it a “doomsday scenario.” It would “spark a financial crisis and plunge the economy into recession.”

NBC’s hysteria is the consensus hysteria, the mainstream hysteria.

CBS reports, via Moody’s, that a government closing would lose 6 million jobs and $15 trillion in vanished wealth.

CNN shrieks about mounting unemployment and “a near-freeze in credit markets.”

Raise the debt ceiling, they shout… lest the heavens fall.

Sen. McConnell does not want blame thundering down upon his slender shoulders.

He therefore yelled uncle — and broke his stare:

To protect the American people from a near-term Democrat-created crisis, we will also allow Democrats to use normal procedures to pass an emergency debt limit extension at a fixed dollar amount to cover current spending levels into December.

We are not one whit surprised. Last week we went crystal-gazing. Here is the scene that paraded before our cold, cynical but knowing eyes:

We might otherwise gloat and croon about our vast prescience. Yet the business was far too predictable.

We expect additional eye-blinking come December — and from the identical Senate minority leader.

Yet for the moment… all is peace.

The stock market was up and away today on Sen. McConnell’s blinks…

Ten-year Treasury yields leapt to 1.57% — the highest since June.

But would a government “shutdown” — the quote marks are necessary — be the devastation it is presented to be?

The Taxpayer Pays Either Way

We hazard the long-term rewards would outdo whatever short-term hells are endured.

In 2021 the U.S. government plans to spend $6.8 trillion. Of which about half is borrowed — $3 trillion. So if they can’t raise the ceiling, they’d have to cut that $3 trillion…

So what would happen?

We must first recall that government lacks all resources. Before it can dole out one meager dollar for guns or butter, for bread or circuses, it must first pluck it from private pockets — directly or indirectly.

It is true, the dollar borrowed appears a lesser plucking than the dollar taxed.

But it is an equal plucking. It is merely a plucking at one remove.

Do not forget, the borrowed dollar must be repaid — with interest into the bargain. And the government sets the taxpayer hanging upon its hook, hopelessly adangle.

His taxes pay interest on the government’s debts.

St. Onge, by way of explanation:

Well, $3 trillion is a lot of money — roughly 15% of America’s GDP. But we have to remember where that $3 trillion came from. The government, after all, doesn’t actually create anything, every dollar it spends came out of somebody else’s pocket. Whose pocket?

Part of the $3 trillion was bid away from private borrowers like businesses, and the rest was siphoned from people’s savings by the Federal Reserve creating new money.

This means that, yes, GDP would decline sharply. But wealth would actually grow, perhaps substantially. The businesses would be able to buy things they need, while the savers keep their money that was doing useful things like paying their retirement.

Who is this St. Onge heretic? GDP drops while wealth soars?

Paul Krugman would denounce him as an arm of Satan and rope him to a stake.

Yet like a Hollywood movie set… a false set of teeth… or a smile on Hillary Clinton’s face… the GDP numbers often give a deceptive appearance.

GDP and the Misuse of Statistics

Government at all levels is credited with a thumping 36% of United States GDP spending.

You have in fact witnessed a squandering of time, effort and resources.

What if the resources to fund this foolish errand had remained in rightful hands? Again, St. Onge:

Yes, it will be a sharp drop in GDP. But so long as government stays out of the way… the recovery will be very rapid…

A government that suddenly loses half its budget is going to find a lot of things not worth doing. Given a choice between defunding government workers’ pensions or defunding economy-crushing Green New Deals, governments will choose their own.

So that’s short term: pain, but less than it seems.

The “Magic” of Government Default

At this point the “magic” of closings becomes manifest. Government default represents “a tremendous investment in our future prosperity”:

And that’s where the magic begins. Because ending deficits fundamentally reduces governments’ long-term ability to prey on the people’s wealth.

This is because debt and money printers are much less obvious than taxes, which are painful and make more enemies. So a default becomes a “back door” to move government back toward its traditional “parasite” role rather than the “predator” role it’s taken on since Nixon unleashed the money printers… the bottom line is government default is a tremendous investment in our future prosperity.

And so we raise our three cheers for government default — no — four cheers, five, six and seven cheers. Eight cheers. Nine, ten.

If this be doomsday, then give us doomsday.

Put aside the near-term agonies and laments. Turn instead to the horizon, to the far-term prosperity that is yours.

Be certain he receives it prior to Dec. 3…