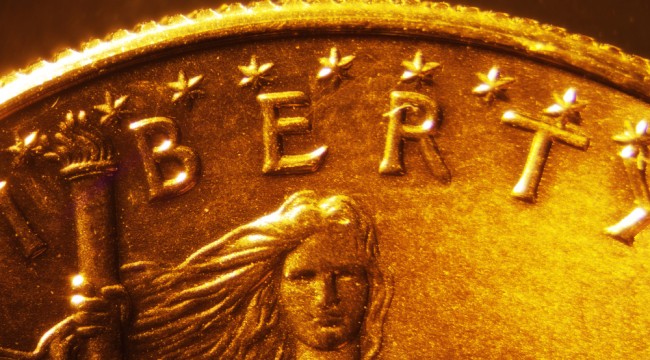 A Massive Debt Bubble Waiting to Be Flattened

Not much market action yesterday. The Dow was flat. Gold was flat.

TV screens are flat. Some singers are flat. Cakes come out flat. Tires go flat. Prizefighters are laid out flat. Dead men, too.

Sooner or later, we all go flat.

One of our favorite columnists, Thomas Friedman, wrote a book about it, The World Is Flat.

…superficial thinking… [is] the unleaded gas that purposeful jackasses put in their tanks.

You can count on Friedman. He’s bound to have something to say on almost any subject.

He has so many thoughts because they come so cheaply to him. He is not a deep thinker. He is in over his head in a parking lot puddle.

But we have no quarrel with superficial thoughts. They are better in many ways. Easier to understand and repeat at dinner parties. And much more easily put to service by men of action.

That’s the real benefit of all superficial thinking: It’s the unleaded gas that purposeful jackasses put in their tanks.

Forget the nuances. Ignore the paradoxes. Don’t overthink it. Give them a simple idea, and they can use it to make a grand mess of anything.

Friedman is a world improver. Not in a way that would make things better. If he wanted to do that he could paint his windows, pick up trash on the sidewalk and flirt with the fat meter maid.

No. He insists on telling other people what to do. He is not a real doer; he is a real pain in the derriere. He has a plan for every situation and a fix for every problem. In every case, he claims to be able to look into the future and make it better before it happens.

Remember our dictum: People who try to force others to abide by their ideas are always the same people whose ideas are moronic. You can quote us on that.

Years after publication, Friedman explained what he had in mind in his 1993 book:

When I wrote The World Is Flat, I said the world is flat. Yeah, we’re all connected. Facebook didn’t exist; Twitter was a sound; the cloud was in the sky; 4G was a parking place; LinkedIn was a prison; applications were what you sent to college; and Skype, for most people, was a typo.

Friedman was right. Globalization, under the umbrella of Pax Americana, was a trend. He spotted it. He teased it out. And he wrote a book about it that was a bestseller.

But there was much more to globalization than new technology and American capitalism.

Importantly, it was financed by a corrupt new money system. Under the postwar Bretton Woods agreement, foreign nations linked their currencies to the US dollar… and the dollar was linked to gold at a fixed rate.

Over centuries, gold had proven useful. It may not be perfect money. But it was the best yet discovered.

Some crypto currency, such as Bitcoin, may eventually prove more useful. But that is for the future to decide. For us, for now, gold works. “Fiat,” or paper money, does not.

Since the supply of gold is limited, consumer prices tend to remain stable. The supply of credit is also limited, because the currency is limited. When demand for credit increases, the price of it (interest rates) goes up. And the credit-fueled boom comes to an end.

Back in the 1960s, President Johnson pursued an expensive, hopeless war in Vietnam and an ambitious giveaway program at home. “Guns and butter” — he wanted it all.

As the bills came due, the financial whizzes in Washington had a simpleminded idea: “Rather than pay up in gold, as is customary (and statutory), let’s change the system so we can pay our debts in IOUs — just green pieces of paper that we’ll call dollars.”

“Wait a minute,” more thoughtful people objected. “A purely fiat money system has never worked. If you could create real money just by printing up pieces of green paper, everyone would do it.”

Determined not to overthink it, the authorities applauded the benefits of this new “flexible” currency.

In 1968, Johnson asked Congress to remove the requirement that the dollar be backed by gold. Then in 1971, his successor, Richard Nixon, ended the direct convertibility of the dollar to gold.

Thus, the US abandoned gold and took the lid off the money pot. Now, there was almost no limit to how much cash could be created… how much credit could be boiled up… or how many bubbles could come rising from the hot, open crock.

The world was not so much flattened as hammered into a grotesque new shape by US monetary policy.

Now, people could buy things they couldn’t afford and probably didn’t need with money they didn’t have. Credit cards, lines of credit, mortgages and their derivatives!

Without gold, the feedback looped around in the wrong direction. American consumers bought — on credit — Chinese goods. Dollars went to China. And to keep its currency from appreciating versus the dollar, the Chinese government had to create renminbi to buy up the dollars from private holders.

This caused a boom in China, which added extra capacity to China’s export machine and pinched off more and more of America’s industrial output.

Then what could China do with all these dollars? It had to invest them back into the US. So it bought US Treasury debt. This helped push down US interest rates, stimulating more credit-fueled buying.

The world was not so much flattened as hammered into a grotesque new shape by US monetary policy.

The Chinese produced too much. The Americans consumed too much. And all over the world, a huge debt bubble got bigger and bigger — waiting to be flattened.

Ed. Note: Bill Bonner co-founded The Daily Reckoning with fellow New York Times bestselling author Addison Wiggin over ten years ago. And since its inception it has been one of the most informative and entertaining reads you can find anywhere in the world. And right now, you can get The Daily Reckoning sent straight to your email inbox, absolutely FREE. Click here now to sign up and discover all the unique benefits the Daily Reckoning email has to offer.