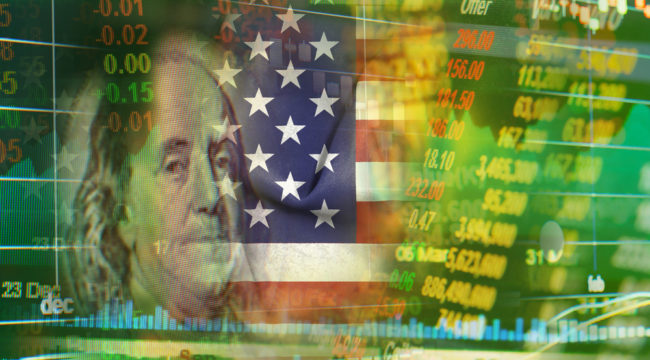 The Fed’s about to raise interest rates — for only the third time in 10 years. More seem likely…

A potentially crushing debt ceiling crisis is days away. The president’s a human volcano. Upcoming elections in France and Holland menace the European Union. North Korea’s lighting off rockets…

And yet… and yet… market volatility hovers at record lows.

Odd. But there you are.

“We haven’t seen levels this low since early 2007,” notes Andy Crowder of Wyatt Investment Research, a slight crack in his voice.

Early 2007 — the still before the whirlwind.

“So profound is the market’s peace that a debate is raging over whether it’s healthy,” says Bloomberg.

Volatility’s so low it’s even got the Fed — the Fed! — arching an eyebrow. Per Bloomberg, some in the ranks have “expressed concern that the low level of implied volatility in equity markets appeared inconsistent with the considerable uncertainty attending the outlook.”

Has the market reached “peak complacency”?

The S&P’s 250% advance since 2009 has eclipsed any bull market at the eight-year mark, Bloomberg notes. It’s spiked 11% Since Trump’s election alone.

Just so. But if that’s the reason, David Stockman says have another guess. The debt ceiling deadline falls this coming Wednesday, March 15 — the ides of March.

And David says the looming debt ceiling crisis and unbridgeable partisan divide will nix tax reform and strangle any spending spree in the crib:

I see a huge mess, bloodbath, fiscal stalemate in Washington that will remove any of the stimulus that any of the traders are expecting from infrastructure and big tax cuts and all the rest… Wall Street is totally misreading Washington. It’s pricing in a fantasy about a Trump stimulus that simply isn’t going to happen.

David’s conclusion: The coming debt crisis will yield a financial crash of “unbelievable proportions.” But the robo-machines are missing it:

“I am seeing reality; the machines [on Wall Street] are simply trading on sound bites, tweets and hourly sentiments. This is… the biggest sucker’s rally in history. There is going to be a huge surprise very soon.”

(How soon? And how can you prepare while there’s time?

But David’s not the only analyst yanking the alarm…

And Sam Stovall, CFRA’s chief investment strategist, warns that historically, the longest bull markets “went out with a bang and not a whimper. Like an incandescent light bulb, they tend to glow brightest just before they go out.”

And after eight years, the lights are burning brighter than ever.

We see the current eerie stillness in terms of low volatility — the S&P 500 VIX is near its lowest levels in more than a decade — as being akin to the calm before the storm… Something has to give at some point — and with stock prices running high, it seems to us that a correction is likely.

“The optimist thinks this is the best of all possible worlds,” waxed satirical fantasy novelist James Branch Cabell. “The pessimist fears it is true.”

If the market’s at peak complacency, if it’s set up for a Humpty Dumpty act… they might both be right…