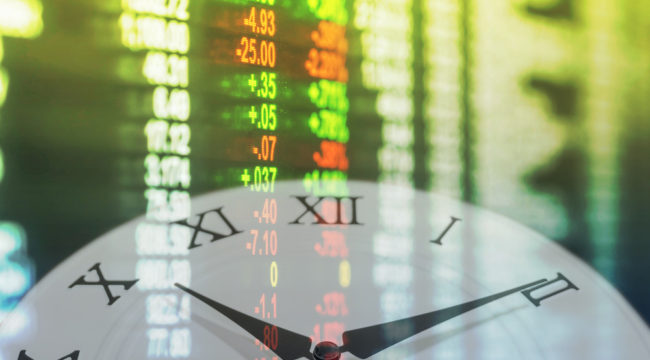 President Trump is expected to nominate the next Federal Reserve chair within a matter of days.

As I’ve explained before, Donald Trump has the opportunity to appoint a higher percentage of the Board of Governors of the Federal Reserve system at one time than any president since Woodrow Wilson.

President Wilson signed the Federal Reserve Act during the creation of the Fed in 1913 when they had a vacant board. At that time, the law said the secretary of the Treasury and the comptroller of the currency were automatically on the Fed’s board of governors. But besides that, President Wilson selected all of the other participating members.

Due to vacancies he inherited and key resignations, Trump now has the opportunity to fill more seats on the Fed’s Board of Governors than any president since then.

That’s pretty amazing when you think about it.

Trump will own the Fed.

Meaning, whatever the president wants monetary policy to be, he’ll get. In other words, Donald Trump will be able to shape the Fed’s majority. But the tricky part is figuring out how he plans to shape it…

During the campaign season, Trump called China and other nations currency manipulators. That signaled he believed the dollar was too strong and wanted it to weaken. But then the North Korean nuclear crisis rose to the fore.

Trump backed off his threats against China because China has the most economic influence over North Korea, and Trump wanted China to use that leverage to convince the North to back off its nuclear program.

But China didn’t deliver as Trump had hoped, and a trade war with China is now likely. That’s especially true now. Chinese president Xi Jinping has solidified his hold on power after the Chinese Politburo re-appointed him yesterday. Xi had avoided rocking the boat in recent months while his position was uncertain. But now that his lock on power is secure, Xi can afford to be much more confrontational with Trump.

Trump’s trade policy has led many to believe that Trump will appoint a lot of “doves” to the Board. But don’t be surprised if Trump goes with a hard-money board. In fact, that’s what I expect. These will be hard-money, strong-dollar people, contrary to a lot of expectations.

Janet Yellen’s term as chair is up at the end of January — just over three months from now. Whoever President Trump appoints to replace her will be subject to Senate confirmation.

Because that process takes time, that means the president has to name Yellen’s successor around November or December.

And again, he’s expected to make that announcement by Nov. 3, before he heads to China.

The market is tightly focused on President Trump’s pick. As of October 23, betting markets had the approximate probabilities as follows:

Powell’s main qualification seems to be that he’s just like Yellen except he’s a Republican. So, if we combine their votes, that a 68% chance that policy will continue unchanged, which means more rate hikes ahead.

The next in line is John Taylor, who is considered the most hawkish of the group. If we add his votes to the Powell + Yellen pool, that an 85% probability that policy will either be the same or tighter.

No relief for gold in the Fed sweepstakes.

Now, as I’ve been saying for months, my money’s on Kevin Warsh. Warsh is the likely next chair of the Fed.

Kevin Warsh is a pragmatist, not an ideologue like Yellen. He’s not beholden to obsolete Fed models like Phillips curve that says low unemployment means higher inflation. Warsh understands that disinflation is a serious problem for a country with a 105% debt-to-GDP ratio, like the U.S.

Warsh and the pragmatists understand that inflation is needed for the U.S. to have any hope of getting the debt problem under control.

We’ll see how this all plays out probably late this week or early next before Trump leaves for China.

But it’s important to realize that institutions boil down to people. And there’s going to be a lot of turnover at the Fed under Trump. It’s not just limited to his choice of Fed chair.

Yes, Yellen will likely be out. But so are Fed officials that align with her, like Vice President Stanley Fischer, who announced his resignation in September.

As I indicated, the new, emerging Fed will have less faith in traditional models. For example, in September, Fed governor Lael Brainard delivered one of the most significant Fed speeches ever. Translating from Fed-speak to plain English, she more or less admitted the Fed has no idea how inflation works.

The Fed’s favorite measure of inflation plunged from 1.9% to 1.3% between January and August 2017 even as job creation continued and the unemployment rate fell. In other words, the relationship between tight labor markets and inflation turned out to be the exact opposite of what the Fed believed.

Their models are in ruins.

Of course, this is what I’ve been telling my readers to expect all year. The Fed was tightening into weakness, not strength, and would soon have to flip back to ease in order to avoid an outright U.S. recession. And ease is exactly what Brainard called for in her speech.

In the meantime, a lot of uncertainty over the Fed’s direction will hover over the market, as if there wasn’t enough uncertainty in the market already.

But one thing is certain:

The next Fed head will have a lot on his (or her) plate.