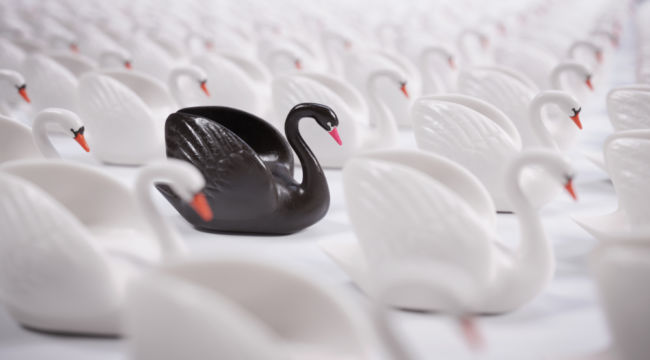 I began studying complexity theory as a consequence of my involvement with Long-Term Capital Management, LTCM, the hedge fund that collapsed in 1998 after derivatives trading strategies went catastrophically wrong.

After the collapse and subsequent rescue, I chatted with one of the LTCM partners who ran the firm about what went wrong. I was familiar with markets and trading strategies, but I was not expert in the highly technical applied mathematics that the management committee used to devise its strategies.

In statistics, a standard deviation is symbolized by the Greek letter sigma. Even non-statisticians would understand that a seven-sigma event sounds rare. But, I wanted to know how rare. I consulted some technical sources and discovered that for a daily occurrence, a seven-sigma event would happen less than once every billion years, or less than five times in the history of the planet Earth!

I knew that my quant partner had the math right. But it was obvious to me his model must be wrong. Extreme events had occurred in markets in 1987, 1994 and then 1998. They happened every four years or so.

Any model that tried to explain an event, as something that happened every billion years could not possibly be the right model for understanding the dynamics of something that occurred every four years.

From this encounter, I set out on a ten-year odyssey to discover the proper analytic method for understanding risk in capital markets. I studied, physics, network theory, graph theory, complexity theory, applied mathematics and many other fields that connected in various ways to the actual workings of capital markets.

Finally I received invitations to teach and consult at some of the leading universities and laboratories involved in complexity theory including The Johns Hopkins University, Northwestern University, The Los Alamos National Laboratory, and the Applied Physics Laboratory.

In these venues, I continually promoted the idea of inter-disciplinary efforts to solve the deepest mysteries of capital markets. I knew that no one field had all the answers, but a combination of expertise from various fields might produce insights and methods that could advance the art of financial risk management.

I proposed that a team consisting of physicists, computer modelers, applied mathematicians, lawyers, economists, sociologists and others could refine the theoretical models that I and others had developed, and could suggest a program of empirical research and experimentation to validate the theory.

Whenever prominent economists were confronted with a “seven-sigma” market event they dismissed it as an “outlier” and tweaked their models slightly without ever recognizing the fact that their models didn’t work at all.

Physicists had a different problem. They wanted to collaborate on economic problems, but were not financial markets experts themselves. They had spent their careers learning theoretical physics and did not necessarily know more about capital markets than the everyday investor worried about her 401(k) plan.

I took this as a great compliment. I knew that a fully-developed and tested theory of financial complexity would take decades to create with contributions from many researchers, but I was gratified to know that I was making a contribution to the field with one foot in the physics lab and one foot planted firmly on Wall Street. My work on this project, and that of others, continues to this day.

This approach stands in stark contrast to the standard equilibrium models the Fed and other mainstream analysts use.

An equilibrium model like Fed uses in its economic forecasting basically says that the world runs like a clock. Every now and then, according to the model, there’s some perturbation, and the system gets knocked out of equilibrium. Then, all you do is you apply policy and push it back into equilibrium. It’s like winding up the clock again. That’s a shorthand way of describing what an equilibrium model is.

Unfortunately, that is not the way the world works. Complexity theory and complex dynamics explain it much better.

What are examples of the complexity?

One of my favorites is what I call the avalanche and the snowflake. It’s a metaphor for the way the science actually works but I should be clear, they’re not just metaphors. The science, the mathematics and the dynamics are actually the same as those that exist in financial markets.

You see a snowflake fall from the sky onto the snowpack. It disturbs a few other snowflakes that lay there. Then, the snow starts to spread… then it starts to slide… then it gains momentum until, finally, it comes loose and the whole mountain comes down and buries the village.

The instability of the system as a whole was a problem. So when I think about the risks in the financial system, I don’t focus on the “snowflake” that will cause problems. The trigger doesn’t matter.

In the end, it’s not about the snowflakes, it’s about the initial critical state conditions that allow the possibility of a chain reaction or avalanche. The coronavirus was just the snowflake that triggered the current crisis.

So now we’ve got the avalanche. And digging out won’t be easy.