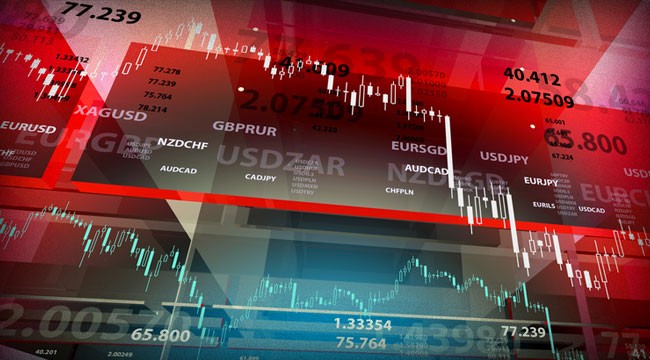 ST. MICHAELS, Maryland – The flag in front of our hotel flies at half-mast.

The little town of St. Michaels is a tourist and conference destination on the Chesapeake Bay. It is far from Orlando… and even farther from Daesh (a.k.a. ISIL) and the Mideast.

Out on the river, a sleek sailboat, with lacquered wood trim, glides by, making hardly a ripple on the water. Other boats are moored. There is scarcely a sound… except for a bell in town that chimes on the quarter hour.

We are staying two days. But we could happily remain longer and get to know the particularities of the place. What food do they eat here? What do they worry about? What stories do they tell each other?

We will come back to that in a moment. First, a look at the markets…

The Dow sold off yesterday. It fell 132 points or just under 1%.

As we pointed out yesterday, there are many reasons to believe stocks will go down… and few reasons to think they won’t.

A dear reader wrote to remind us that if you did the GDP statistics the way they did them during the Reagan administration, you’d see that the U.S. economy has been in a depression for the last 15 years.

You wouldn’t expect stocks to trade at record highs after 15 years of depression. But we’re getting used to weird and whacky things in the financial markets; who would have thought that people would ever pay for the privilege of lending money to bankrupt governments?

And yet, here we are, in the year 2016, with $10 trillion of government debt already trading at negative yields… and yields continuing to fall. And who would have imagined that we would live for more than seven years with the Fed’s key interest rate at an emergency zero level?

Maybe this time it really is different. Maybe, in the future, you will never earn any interest lending money to the government. And maybe, going forward, candidates for president will always be hucksters and hacks.

Yes, and in the stock market, perhaps the old pattern – up, down, up, down – that has held for as long, no longer applies.

“I will make a bold prediction,” says our old friend Doug Casey at Casey Research.

“I know I’ve been saying for a long time that this market is ready to blow up. But I’ll say it again. It is. And it will happen before the end of this year.”

But wait… a word of explanation…

We recently decided to invest – heavily – in colleague Chris Mayer’s stock picks. We do so realizing that the most likely direction for the overall stock market over the short term is down, not up.

But as Chris likes to point out to his Bonner Private Portfolio subscribers, stocks are more than just ticker symbols. He doesn’t invest in “the stock market.” He buys ownership stakes, at reasonable prices, in businesses that won’t wilt in a recession. At least, we can hope! Besides, we’re investing for the next generation… willing to wait through a 20-year drought before we get another good soak.

Now, back to the Chesapeake…

Its fertile, flat fields… and ready access to the Chesapeake Bay… made it a prosperous farming area, beginning in the 17th century.

The large farms, usually worked by slaves, were separated from Annapolis and Baltimore by the bay, leaving the area with its own conservative, and backward-leaning, culture.

When the colonies announced they were rebelling against George III, the Eastern Shore remained loyal. The planters here had no quarrel with the British. Most of them were themselves British… proud of their heritage… and eager to retain ties with the homeland.

So, as the rest of the nation celebrated independence, the Eastern Shore counties drew their curtains in silence and lit candles.

Come the War Between the States, and the Eastern Shore was out of step again.

It’s difficult for a man to see something when his wealth depends on not seeing it. Already, in most of Maryland, slavery was being given up. Not that the Marylanders on the west side of the bay were any more ethical, but they could see that slavery no longer paid. It was too easy for slaves to escape to the North.

The Eastern Shore was more isolated, making it harder for slaves to get away. And its field crops could be worked profitably by forced labor.

Flag of the Conquerors

In the mid-19th century, proposals were entertained in the state capital, Annapolis, for the Eastern Shore to secede from the rest of the state.

But the state held together, with divided loyalties and most of the young men left to join the Confederate cause.

In fact, the last soldiers to surrender – those accompanying the president of the Confederacy, Jefferson Davis, in his flight to Florida – were from Maryland’s Eastern Shore.

The “shore” remained cutoff until the Bay Bridge was built in 1952. (We have a vague memory of crossing the bay on a ferry, just as the bridge was being built. It was an adventure and a delight! Then, the bridge ruined the area. Now, it is little different from the rest of the state… with Chick-fil-As and Walmarts and long lines of traffic to and from the Atlantic beaches.)

And today it is not the Talbot County flag flying at half-mast. It is not even the flag of the sovereign state of Maryland. It is the Stars and Stripes… the flag of Lincoln, Sherman, Hillary, and that rascal husband of hers. It’s now the flag of the gentle of Maryland’s Eastern Shore… it’s the flag of the conquerors… of a vast government with outposts all over the world.

You can’t even ask the questions: What do they think? What food do they eat? What do they do? You will get millions of different answers.

And the more you ask, the less you will know. What is an “American”?

And the more you see of it, the less you know what the country looks likes. There are no particularities to hang onto… to have and to hold… to develop a genuine affection for.

The U.S. is too big… too varied… too much of everything. You can’t fix a single view of it, even in your mind. For there is always some other part at odds with it.

You can’t get attached to its people either; there are too many of them of too many different kinds. You can appreciate them – but in the abstract, not in the particular. It’s the difference between liking women… and being married to one.

But now our problems, challenges, and discontents are big. They are national and international.

We cannot see them. We cannot understand them. Instead, we draw their measure from the news media… based on a flag that flutters and sags, depending on which way the wind is blowing.