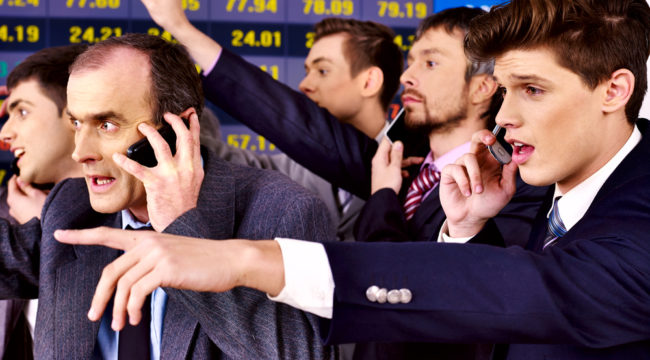 This “Market” Discounts Nothing Except Monetary Cocaine

“Everyone is a bit surprised,” said Lasry, co-founder of Avenue Capital, which has $11.3 billion of assets under management. “But the market is telling us what’s going to happen next year [or] the next two years.”

While questioning the advance in stocks, Lasry said on “Squawk Box” the market may be signaling a stronger-than-expected U.S. economy, with a growth rate somewhere in the 2–3% range….”

Ah, the old myth of a market that processes information, discovers price and discounts the future. Apparently, no one told Lasry that a market based on these fundamentals no longer exists.

The outlook for economic growth or corporate profits haven’t improved since the market’s post-Brexit low. The market’s new highs are just another party in the casino after the latest batch of monetary cocaine — helicopter money — was passed all around.

But these revelers are going to need something stronger than the hope for “helicopter money” to avoid annihilation when the long-running central bank con job finally collapses. Indeed, that ending lies directly ahead because helicopter money is a bridge too far.

There is really nothing to it except more of the same aggressive monetization of the public debt that has been going on for nearly two decades. That is, whether the central banks buy public debt from the inventories of the 23 prime dealers and other market speculators, or directly from the U.S. Treasury, makes no technical difference whatsoever.

The end state of “something for nothing” finance is the same in both cases. In fact, “helicopter money” is just a desperate scam emanating from the world’s tiny fraternity of central bankers who have walked the financial system to the brink, and are now trying to con the casino into believing they have one more magic rabbit to pull out of the hat.

They don’t. That’s because it takes two branches of the state to tango in the game of helicopter money. The unelected monetary central planners can run the digital printing presses at whim, and continuously “surprise” and gratify the casino gamblers with another unexpected batch of the monetary drugs.

That has been exactly the pattern of multiple rounds of QE and the unending invention of excuses to prolong ZIRP into its 90th month. The resulting rises in the stock averages, of course, were the result of fresh liquidity injections and the associated monetary high, not the discounting of new information about economics and profits.

By contrast, helicopter money requires the people’s elected representatives to play. That is, the Congress and White House must generate large incremental expansions of the fiscal deficit — so that the central bankers can buy it directly from the U.S. Treasury’s shelf, and then credit the government’s Fed accounts with credits conjured from thin air.

To be sure, the cynics would say — no problem! When have politicians ever turned down an opportunity to borrow and spend themselves silly, and to than be applauded, not chastised, for the effort?

But that assumes we still have a functioning government and that today’s politicians have been 100% cured of their fears of the public debt. Alas, what is going to cause helicopter money to be a giant dud — at least in the U.S. — is that neither of these conditions exist.

Regardless of whether the November winner is Hillary or the Donald, there is one thing certain. There will be no functioning government come 2017. Washington will be the site of a deafening and paralyzing political brawl — like none in modern U.S. history, or ever.

The existing budget deficit will end the current year at more than $600 billion. That’s baked into the cake already, based on the recent sharp slowdown in revenue collections. And means that the FY 2016 deficit will be one-third higher than last year’s $450 billion.

Moreover, when the new Congress convenes next February the forward budget projections will make a scary truth suddenly undeniable. That is, the nation is swiftly heading back toward trillion dollar annual deficits under existing policy, even before the impact of a serious recessionary decline.

The reality of rapidly swelling deficits even before enactment of a massive helicopter money fiscal stimulus program will scare the wits out of conservative politicians, and much of the electorate, too. And the prospect that the resulting huge issuance of Treasury bonds will be purchased directly by the Fed will only compound the fright.

What fools like Bernanke haven’t reckoned with is that sheer common sense has not yet been driven from the land. In fact, outside of the groupthink of few dozen Keynesian academics and central bankers, the very idea of helicopter money strikes most sensible people as preposterous, offensive and scary.

Even if Wall Street talks it up, there will be massive, heated, extended and paralyzing debate in Congress and the White House about it for months on end. There is virtually no chance that anything which even remotely resembles the Bernanke version of helicopter money could be enacted into law and become effective before 2018.

Will the boys and girls still in the casino after the upcoming election gong show patiently wait for their next fix from a beltway governance process that is in sheer pandemonium and indefinitely paralyzed?

Then again, why would anyone think the stock market is actually expecting an economic recovery? Reported last twelve month (LTM) earnings of the S&P 500 are $87 per share, and even if there is no further deterioration from this quarter’s 5% decline during the balance of the year, 2016 earnings will come in at barely $89 per share.

Even if that were to happen, and notwithstanding the headwinds in China, Japan, the eurozone, the middle east, the faltering oil market and countless more, how does that cause an earnings rebound?

Barring some massive breakout in profit margins, there is no way for next year’s earnings to hit even $95 per share, which is still 23X.

Yet that would still be discounting what would be a 102 month old business expansion by year-end 2017. Even that unlikely outcome, given that the business cycle has now been outlawed, would absolutely end in recession and a cyclical collapse in earnings not long thereafter.

But here’s the thing. There is no “discounting” involved in the madness currently swirling in the stock market because there is not a remote chance of a break-out that could possibly compensate for the tepid growth of GDP and sales.

In short, the market is not trading on a rebound in GDP, revenue growth or a breakout of already elevated profit margins. It’s just high on one more dose of monetary cocaine that in short order will prove to have been not even that.