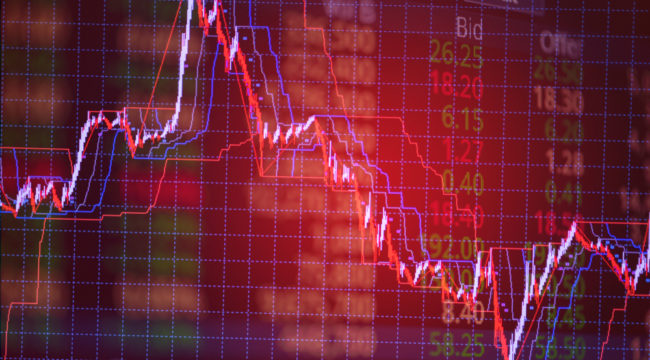 The Market Is Approaching the Edge

The stock market has begun to exhibit the classic symptoms of what professional men call manic depression.

The Dow Jones industrial average was down 510 depressed points to start yesterday morning.

Then a pendulum swing to the other extreme sent it 720 manic points higher.

Meantime, yesterday was the 26th occasion this year that the S&P has swung 1% or more in either direction.

Six of these mood swings have produced declines of at least 1% — as many as the last two years combined.

Something’s just not right between the ears.

At once the patient reveals the source of its anxiety — trade.

Since the White House began announcing tariffs on this, that and else, it admits to being a wreck of nerves.

One scrap of trade news, it laments, is enough to set it loose in either direction, up or down.

Half the time it’s soaked in tears.

The other half it’s racked with an uproarious joy beyond all description.

As proof thereof, we are immediately directed to yesterday’s manic-depressive episode…

The stock market went to pieces early yesterday after China announced plans to impose an additional 25% tariff on $50 billion worth of American exports.

As stated, the Dow Jones had fallen over 500 points to start the day.

A dismal pall settled over the business.

But then a ray of sunlight cracked the gloom…

The eternally sunny Larry Kudlow — Trump’s new economic adviser — took to the airwaves to assure markets that everything is going to be just swell:

“I can understand the stock market anxiety. I get that,” Dr. Kudlow sympathized with the half-suicidal patient.

The tariffs, he promised in caressing tones, will lead to “better economic growth, more trading going on, improved wages on both sides.”

Whether Kudlow believed the words issuing from his own mouth… we cannot say.

He’s been a drummer for free trade since his days in the Reagan administration.

And these days Mr. Kudlow sits near President Trump in the Oval Office.

Regardless, his soothing babble yesterday was tonic to the market mood… and by 9:30 stocks were up and away.

By the time the closing bell rang 6 and a half hours later the Dow Jones had soared some 720 points.

The manic phase carried over into today’s trading.

But there is always tomorrow… and the day following.

Will additional trade news tip stocks into another depressive episode?

In the optimist camp we have Keith Parker, UBS U.S. equity strategist:

“At this point, the expectation, given the market move, is that further [trade] escalation is going to be less likely. Our view is a lot of it was priced in.”

In this camp we also find a certain Raoul Leering, he being head of international trade analysis for ING:

“It is likely that China will, in the end, cut its losses and be willing to give Trump something.”

In the pessimist camp — on the other hand — we find our own Jim Rickards:

“What we have seen so far are just the opening shots of the coming trade war. Think of it as the Battles of Lexington and Concord that opened the Revolutionary War. Much larger tariffs and penalties are waiting in the wings.”

And so a fragile psyche hangs in balance.

But let us pile additional pressure upon the thing…

What if it disappoints?

Even worse… what if it thrills?

Additional rate hikes could tip the patient into another depressive cycle.

We cannot predict the market’s next swing, of course — up, down or sideways.