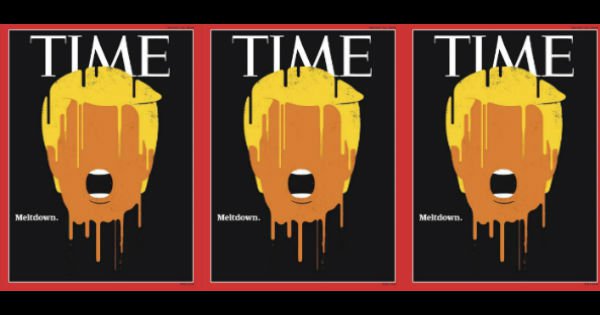 Is the presidential election already over?

To quote The Christian Science Monitor: “The nation’s Republicans are working against the clock to answer two key questions: Can [their candidate] possibly attract enough independent and Democratic votes to win in November?

“And if he is likely to lose,” the Monitor wonders, does another candidate still have “time enough to challenge him for the GOP nomination?…

“Intellectuals don’t want to take him seriously,” it continues, but concedes that “he does well with working-class voters.” And he could “do well in the pivotal Midwest states like Ohio and Illinois, whose southern regions tilted [Democratic]” in the previous election.

Meanwhile, the article quotes I.A. Lewis, director of the Los Angeles Times Poll, saying that the Republican candidate “is the opponent of choice” for the Democrats.

Lewis does allow a sliver of light for Republicans, mind you, saying their candidate “can reach across and cause mischief in the Democratic constituency” and that he “appeals to blue-collar, working-class voters. He can win Democratic votes.”

But then the Monitor seems to slam the door shut with elections analyst Richard Scammon, who doesn’t give the Republican candidate a ghost of a chance in the election: “The odds are very good that [he] will not be successful in November. It looks like the Republicans have done it again.”

1980! It was about Reagan and Carter. A lot of the experts were betting hard against Reagan before the election. Too controversial, too extreme for Joe and Jane average voter. Too this, too that. Sound familiar? Reagan won in a landslide, of course.

Once again, the experts aren’t giving the Republican candidate a snowball’s chance. Too extreme, too controversial, too [fill in the blank].

That’s only one poll, of course. But most give her an average lead between 6–8%. A YouGov/Economist poll gives Trump the best odds — it has him only trailing by 3 points.

But the election’s still 2½ months off. The two candidates haven’t even faced off yet in a televised debate. Their first is scheduled for Sept. 26. The others follow on Oct. 9 and Oct. 19. Can Trump make hay out of them? Consider…

Reagan really tanned Carter’s hide that night. He had the crowd rolling with “There you go again,” and then left voters with this one question: “Are you better off than you were four years ago?” They apparently weren’t. Gallup:

Here’s a chart tracking multiple polls leading up to the 1980 election. They were tightening through September and October. Then they diverged after the debate. Look at the far right for an indication of how much wind that debate put in Reagan’s sails: 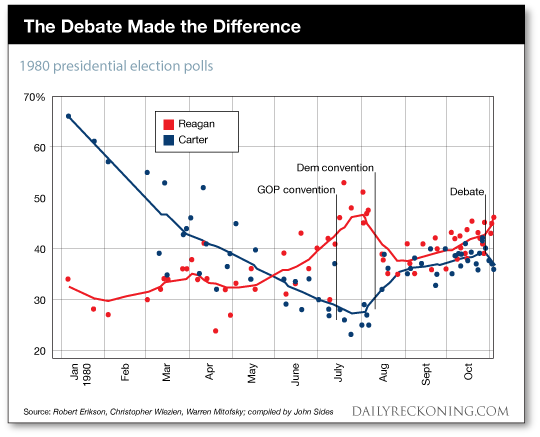 David Stockman actually took on Ronald Reagan in mock debates before the real debates. He played the role of Carter to help Reagan prepare. And David thinks Trump could possibly use the debates to turn the tide against Hillary:

“I saw what can happen when a candidate finally gets the pulse of the country and scores big in the presidential debates,” says David. And he thinks that could rattle the markets, which are already pricing in a Clinton victory:

“On Sept. 26, Trump and Hillary will have their first presidential debate. The results of this debate could blindside the market because at the moment, Hillary Clinton is considered to be a shoo-in.”

If Trump gives her a good sound whaling, the market might have to start factoring in a Trump victory. And who knows what kind of dirt WikiLeaks has ready to dump on Hillary. Or Putin. It could give the term “October surprise” a new meaning. Markets could soon be seeing volatility like the dickens as markets scramble to adjust to new expectations.

And then there’s the unthinkable: What if Trump actually wins in November? Citigroup thinks it means chaos:

“A Trump victory in particular could prolong and perhaps exacerbate policy uncertainty and deliver a shock (though perhaps short-lived) to financial markets. Tightening financial conditions and further rises in uncertainty could trigger a significant slowdown in U.S., but also global growth.”

“A Trump victory could lower global GDP growth by around 0.7–0.8 percentage points, according to our estimates, pushing GDP growth easily below our benchmark for a global recession of 2% global growth at market exchange rates in 2016/17.”

It’s a looking glass world when the nominee of the stiff-collar Republican Party is considered the threat to the economy. Isn’t that what the tax-and-spend Democrats are for? But it’s looking more like Alice in Wonderland with each tick of the clock.

Below, David Stockman shows you why recent market complacency could be the calm before the storm. Volatility could soon return with a vengeance. Read on.