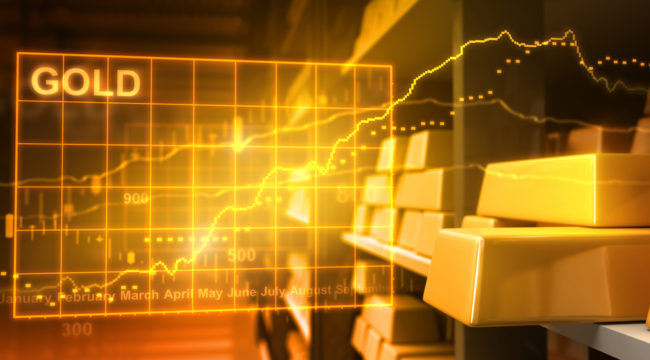 “Markets are sleepwalking through history,” wrote Michael Lewitt in a recent issue of The Credit Strategist. “Investors fool themselves into thinking they live in a stable world. Our world is more unstable than at any time since World War II.”

“Investors who do not reduce risk in their portfolios now are demonstrating a dangerous ignorance of history,” advised Lewitt.

I agree. The world is awash in risk, evidenced by all manner of natural and man-made events.

For example, Houston — the principal energy-focused city in America — has been utterly devastated by epic flooding. And as rain fell on Texas, North Korea shot a missile directly over Japan.

I could go on and list a slew of other headline-grabbing news events, but you read newspapers too. Suffice it to say that there’s a long list of hotspots across the world where anything could happen, most of it being bad. We live in a world filled with risk events.

Gold prices punched through the $1,300 level, early last week, and held firm until the last bell rang on Friday. It’s up again so far this week. As Jim and I have noted on many occasions in the past, gold prices rise when the dollar weakens. Thus, by definition, last week was not good for the dollar.

Houston, of course, staggered under the blast of hurricane and flood. I’ve been talking with people in the area about their recent inundation by Hurricane/Tropical Storm Harvey. According to the writer of one email, “Byron, it’s as bad as it looks. As we learn more, it’s going to get worse.”

The best example of the foregoing is the San Francisco earthquake of 1906, which led directly to the Panic of 1907. That’s because after San Francisco was devastated, numerous banks and insurance companies — from New York to London — had to pay out immense sums on damage claims and write-offs against borrower bankruptcies.

In turn, the Panic of 1907 crystallized a high-level, national political consensus — especially among New York bankers — about the need for a U.S. central bank, based on the then-novel concept of an “elastic currency.” In other words, out of the San Francisco earthquake, the Fed was born.

Now, 111 years later, Houston has been similarly devastated. The place is a wreck, and the damage is ongoing and open-ended.

Millions of people have been displaced. There’s vast property damage — residential, commercial and industrial. Just consider submerged cars and trucks, all destroyed by water. These likely number in the hundreds of thousands of units, if not millions. Cars and trucks alone will account for many billions of dollars of loss.

I’ve lived through a massive flood. I experienced a family business utterly destroyed by floodwaters — Hurricane Ivan, in 2004. Eight feet of water in the warehouse; trucks fully submerged; every item of stock, every box and every bag of everything destroyed by immersion. It was a wipeout, and pure hell. The only solace is in what the philosopher Nietzsche once quipped, “If something doesn’t kill you, it makes you stronger.”

My words of wisdom about floods, are that, when they’re over, your life is not the same, and may never be. Whatever your occupation was pre-flood, in the post-flood days-weeks-months, you are in a full-time recovery mode. It’s nothing but hard, dirty work, plus more work and more work. Add to this, you’ve magically transformed your new occupation into the insurance claims business; and it’s a long walk between the claims office — or the courthouse — and the bank.

Of course, with the Houston flooding, there’s widespread impact on oil shipments, refining and refined products, other shipping and much more. Much of the U.S. energy capital remains underwater, and that’s bad. Then again, it’s no long stretch to forecast that things will be worse when the waters recede.

When the waters go away, it’ll be time to clean up and repair, and that’s when the magnitude of what just happened will kick in. I’ve seen damage estimates in the range of $200 billion — a stunning level of capital destruction; but right now, nobody really knows.

With this scope of damage in Houston and the related impacts, it’s worth pondering how the wrecking of one of the country’s largest, most vibrant cities will have regional and national effects.

You’ll see the impact at the gas pumps and on store shelves. Just one example is bananas. Most bananas imported to the U.S. come through the Port of Houston, so watch for banana prices to rise at your local supermarket.

Then there are the less visible, unpredictable secondary and tertiary effects as we move up and down entire supply chains. I suspect that we’ll feel Houston impacts for a long time to come.

In weeks and months ahead, damage payouts, cleanup and repair costs for Houston will certainly move the needle on the federal budget. I can’t imagine any House or Senate bill containing appropriated funds for Houston not passing, and President Trump would certainly sign it.

This bit of politicking may even smooth the way to increase the debt ceiling in September, which otherwise would be problematic. We’ll see.

At any rate, it’s a safe bet that the Fed’s “elastic currency” will again come into play, big-time. As Fed funds flow out, the wheels of the vast U.S. economy will spin, and there will be dollars to pay for what has to happen. Meanwhile, I doubt that the Fed will raise interest rates in September or December while an entire region — the energy capital of the nation, in fact — is busy rebuilding, post-disaster.

As for the impact on gold and mining companies? Houston represents the destruction of immense amounts of capital. Out of the wreckage, we’ll see an outpouring of Fed dollars and inflation across many sectors. It makes for a weaker dollar, which will lead to higher prices for precious metals and companies that mine them.

I read the North Korean explanation of the blast, and technology involved. In the olden days, when I was in the Navy, a summary of a nuclear weapon triggering device, similar to what the North Koreans published, would’ve been at least “confidential,” and likely “secret.” Now, the Northerners are bragging about what they’re doing.

As an aside, I’d add, based on my experience as an old Navy weapons guy, the North Korean bomb was likely a fission-fusion device; not a true H-bomb — not that we need to quibble over details of the physics package.

At any rate, North Korea’s special weapon shook the earth at 6.3 on the Richter Scale, and further rattled markets. News of the explosion quickly sent gold prices higher by Sunday night/Monday morning in Asia.

Beware, however; people buy rumors and then sell news. We’ll just have to wait and see. The North Koreans are certainly badgering and baiting the West, and the U.S. in general. What is their plan? It’s a safe bet that “we” don’t know.