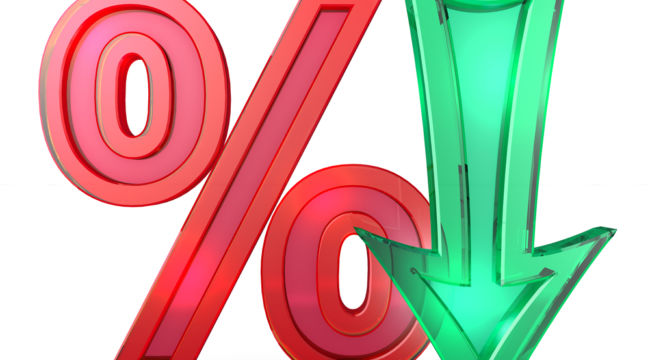 Summer’s youthful green suddenly assumes a faded, olive tinge… as if someone has wrung the color from the trees. Fall fashions are visible on Charles Street. And steel-gray clouds overhang the city.

But the stock market gives the appearance of high summer.

The Dow Jones enjoyed its eighth-consecutive winning session today. It is presently within an ace of record highs.

“As a gesture of good will” the United States has delayed tariffs on $250 billion of Chinese goods.

Formal talks are scheduled next month in Washington.

“As Long as Necessary”

The European Central Bank has also reanimated the animal spirits.

The ECB lowered one of its key rates yesterday. What is more — far more — it announced a new dose of quantitative easing.

When it ends is on the knees of the gods — it will run “as long as necessary.”

The European economy barely budged a jot under a previous rain of quantitative easing.

But it makes no nevermind. So long as it jolts the stock market, the rah-rah men are in full roar.

Meantime, our own Federal Reserve meets next week.

The market presently gives 87% odds it will announce a rate cut.

At least one additional rate cut seems certain by the new year. Two or more appear most likely… say the market odds.

In all, the world’s central banks have cut interest rates 731 occasions since the financial crisis.

Now they are preparing for more…

And this we have on high authority — Bank of America Merrill Lynch:

The next decade will begin with the lowest interest rates… in 5,000 years.

Five thousand years, correct — stretching through the ages to 3,000 B.C. 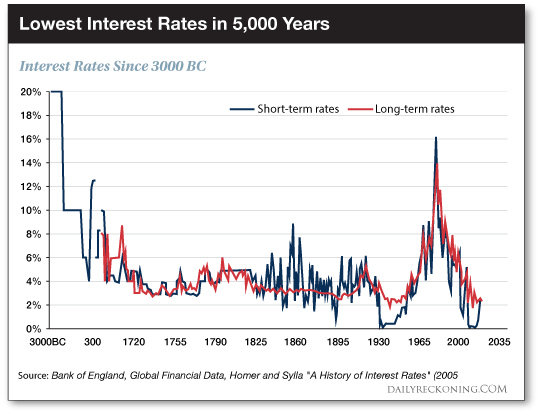 Long-suffering readers may be aware of this chart; we have referenced it before.

We have also leaned upon the labors of Richard Sylla. We do so again today.

He is also co-author of A History of Interest Rates. The book canvasses 5,000 years of interest rates…

From the beginnings of the Bronze Age to the glories of Greece and Rome to the Renaissance to the Age of Empires, clear through to this 21st century… Sylla’s magnifying glass takes them all in.

And Sylla believes he has penetrated the mysteries of interest rate cycles throughout history.

A word of caution is first in order:

Each historical epoch is distinct. Hunting parallels between one and the next can be the errand of a fool — one false turn can throw a fellow hopelessly off the scent.

After all… can anyone reasonably compare interest rates in today’s infinitely complex banking system with ancient Babylonia’s?

Yet Sylla believes he has hooked into an eternal truth…

Here is what Sylla’s research reveals:

“It seems like there is a U-shaped cycle for each civilization.”

And the further interest rates fall… the higher civilization rises.

In each case, Sylla observes “a progressive decline in interest rates as the nation or culture developed and throve.”

Bawerk declared that the cultural level of a nation is mirrored by its rate of interest: The higher a people’s intelligence and moral strength, the lower the rate of interest.

(Caveat: Here we speak of market interest rates — before modern central banking mangled them out of all semblance.)

But in this human vale of tears, happiness is fleeting… and transient.

They know what to do…

The gods begin to tinker man’s interest rates. Rates start rising off the bottom of the “U.”

The pace of civilization slackens… and the flame of achievement flickers.

Debt is the water that douses the flame.

Sylla notes that civilizations fatten on cheap debt. And when interest rates begin rising, the burden of that debt also rises.

At this point, each civilization Sylla studied “declined and fell.”

The message, clear as gin:

Interest rates have plunged to lows unseen in recorded history — besides a brief spell during the Great Depression.

Are we to conclude that present civilization rises to one of history’s greatest heights?

We are nagged by doubt.

Where is our modern Pericles, Sophocles… or Aristotle?

Where is our Cicero? Our Seneca? Our Marcus Aurelius?

High and low we look. And none are in view.

Yet, perhaps we are blinkered by our prejudices, and blind to the glories of our age.

So here is another question:

What if interest rates at the bottom of the “U” — despite all expectations — begin to rise?

If rates rise meaningfully in the years to come, does it mean civilization is in for a sharp “decline and fall” as happened with civilizations past?

We might say that our current low interest rates indicate that we’re at one of the high points of our civilization. Maybe things will get worse from now on.

Recall that civilizations fatten on debt in a falling rate environment… and collapse under that debt as interest rates rise.

A Civilization Set up for a Fall

Interest rates have plunged since their 1981 peak. And the national debt has gone amok: 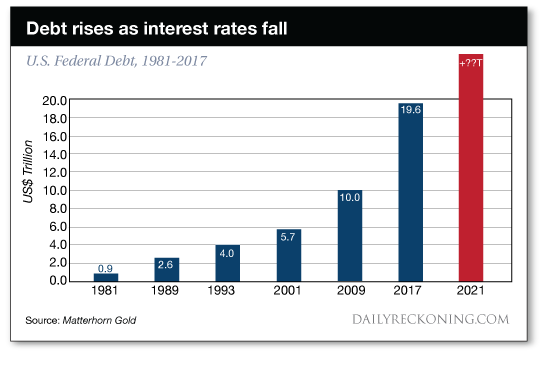 The national debt exceeds $22.5 trillion. And trillion-dollar deficits are upon us once again.

But we are eternally suspicious of consensus.

What if rates begin rising to historically normal levels of 5% or so?

How would America service its debt?

But no more doom-laden questions today. Rates are the lowest in 5,000 years.

And the Dow Jones was up for the eighth-consecutive day…