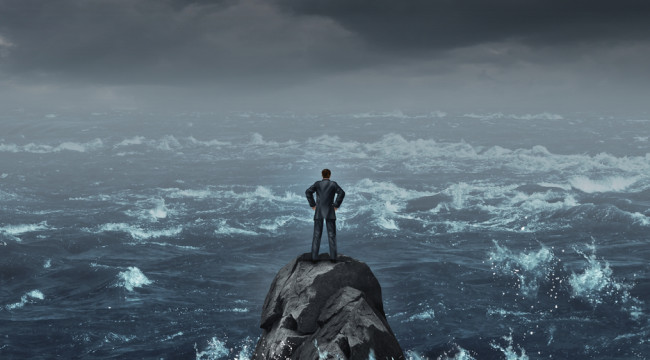 Lost Faith In the Fed

2015: The year faith was lost in central bankers. That’s what we forecast at the start of this year.

Unless you live under a rock, you’re aware by now the Federal Reserve stood pat yesterday on interest rates. (If you do live under a rock, we’re sort of envious.) The fed funds rate remains near zero, as it has ever since the Panic of ’08.

This morning, we see affirmation of our forecast from many quarters — starting with the establishment financial media.

“Central bankers injected roughly $8 trillion into the global economy since the financial crisis,” says this morning’s Wall Street Journal, which then declares the big lesson of the last seven years is, “Cheap money alone can’t solve the world’s economic ills.”

Of course, it’s not only clueless central bankers who are only now figuring this out — as their precious 2% inflation can’t materialize. There’s also the usual lineup of “contrarian” pundits who predicted cheap money would set off hyperinflation.

“To have inflation, you need two things,” Jim Rickards explained to me last year. “You need money supply, but you also need velocity. Velocity’s the turnover of money.

“You need both money supply and velocity to cause inflation. The Fed has taken the money supply to the moon, but the velocity’s collapsing.”

We see that in soft retail sales numbers, and especially in the government’s monthly income-and-spend report: For more than a year, consumer spending has been growing more slowly than personal incomes… and personal incomes are growing at a glacial pace.

We also see affirmation of our faith-lost forecast in a more immediate, visceral way… 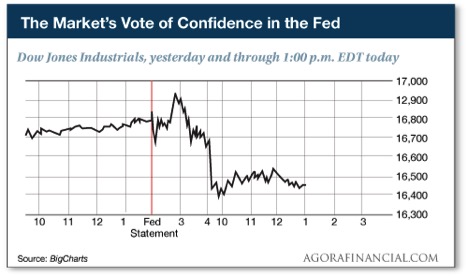 That’s the picture of traders parsing every word of the Fed’s statement, hanging on every word during Janet Yellen’s news conference, and then throwing a tantrum over “uncertainty”.

But as Jim tweeted yesterday before jetting off to Brazil, “uncertainty” is an excuse only for those who weren’t paying attention. “Yellen told us exactly what we need to know on May 22.”

On that day, she delivered a speech in Providence, Rhode Island. “The speech was widely followed by the press and pundits,” Jim wrote his premium subscribers the following week. “News outlets pounced on her statement that ‘I think it will be appropriate at some point this year to take the initial step to raise the federal funds rate.’

“Those who took the time to read the actual speech instead of relying on reporters saw that Yellen’s headline quote started with the phrase, ‘If the economy continues to improve as I expect…’”

But it didn’t. Sure, the unemployment rate is only a tad above 5%, but even she knows that’s because legions of Americans have given up looking for work. Meanwhile, GDP is anemic and inflation as the Fed defines it is all but nonexistent.

If, as Shakespeare said, the past is prologue… now what?

Jim’s been on record since late last year — no increase in the fed funds rate during 2015. Not in March, not in June, not in September. And no, not in December either, Janet Yellen’s protestations to the contrary yesterday notwithstanding.

Our friend Chuck Butler at EverBank Global Markets made the same prescient call late last year. After suffering through Yellen’s news conference yesterday, he writes: “The Fed chair said that the goings-on in China, the market gyrations, the lack of inflation are their concerns.

“But there’s something there that she didn’t say, and I keep going back and I swear I can read it between the lines, and that is that the Fed members are concerned with the unevenness of the economy, and therefore they do not yet feel that the economy is prepared for the first rate hike in nearly a decade. That’s my story and I’m sticking to it!”

Nor is Chuck in the December camp. “I would have to go back and look at the history of when rate hikes were made on the calendar. But I suspect that a December rate hike would be a rare occurrence, if one existed at all! But don’t let that get in the way of the rate hike campers calling for a December rate hike.”