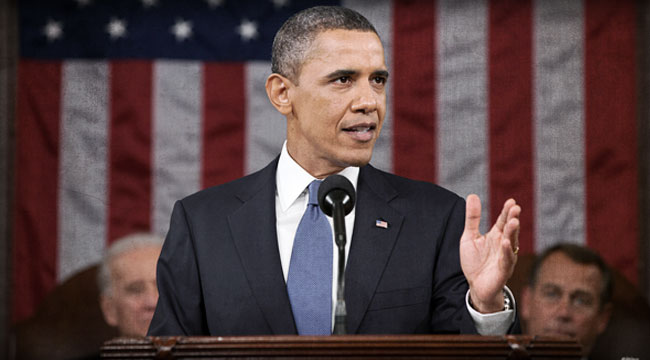 Look Who's Taking Credit for the U.S. Shale Boom

After a week of reckoning about the American oil and gas boom… I’ve got to get something off my chest.

I can’t stand it when a coworker takes credit for something I did.

I’m sure you feel the same way.

Worse yet, imagine a coworker that takes your work straight to the boss to show it off!

No… I’m not talking about Peter pawning off my resource research as his own each day (he’s been good about quoting me.) I’m talking about a completely different rip off…

To this day, I think the most infuriating example was President Obama’s state of the Union Address nearly two years ago. You forgot about that right? Not me…

Amidst the typically unbearable, incessant applause, President Obama made a few comments about U.S. energy during that speech.

“American oil production is the highest that it’s been in eight years. That’s right, eight years. Not only that, last year, we relied less on foreign oil than in any of the past 16 years. (Applause)”

I remember when I first heard it, you thought our current administration had their energy-policy head screwed on right. Better yet, it almost sounded like Obama took a page out of the Daily Reckoning’s playbook. After all, the oil production which he referred to is a theme we had been calling for for some time.

U.S. oil exports are booming — just recently it was announced that they’ve hit a 15-year higher…

“We have a supply of natural gas that can last America nearly 100 years” Obama continued that night. “And my administration will take every possible action to safely develop this energy. (Applause)”

The truth of the matter, though, is simple. The current administration hasn’t done much to help the oil and gas industry in America over the last seven years. In fact, most of the government’s action has been the complete opposite! This is exactly what we mean when we talk about the Tale of Two America’s.

Through the entirety of Obama’s speech, the president never gave credit to the oil and gas companies that infused the industry with waves of new energy-producing technology that we’re enjoying today. I’m talking about drillers, oil service companies, refiners and others.

These guys did all the heavy lifting. They found ways to get at “tight” oil. They increased recovery rates for oil and pioneered the latest technology in horizontal drilling. And they found safe and effective ways to hydraulically fracture shale formations — unlocking America’s latest energy boom.

But you wouldn’t have known that by listening to the president’s speech that night. Or by looking at the White House website today for that matter…

“U.S. Production of Oil is Improving Under Obama” reads one increasing bar chart on the President’s site. Yeah. That was all Barack.

Or how about this: “More than 13 trillion cubic feet of U.S. natural gas production on public lands in the first four years of the Obama administration.”

Looking at the big picture, that’s why the run-up in U.S. energy production is so impressive. Even in the face of an anti-big-oil administration production for shale oil and gas has skyrocketed over the past few years.

Can you see why our domestic energy investment theme is so important?

It’s so unstoppable in fact, that our president — who had no impact on this production boom, other than possibly helping to slow it down — is taking credit for it! Ha!

For all the hard work that the government put towards green energy like wind and solar — the best, most positive, energy comment they could make was about good old oil and gas.

To be sure, this U.S. energy trend is finally showing its true colors to mainstream Americans. For you and me this means there’s still a hot, underlying investment trend.

While the prices for oil across the globe are on the rise — domestic producers and refiners will profit… and you along with them. That’s why I’m an optimist.

Forget the doom and gloom. The d&g is already baked into the pie, right?

We already know our government is a financial mess and the Fed Chairman du jour will pull all the levers she can — most of which seem to end up the same effect (less value for the greenback.)

Will today’s vague Fed announcement send the Dow higher higher or lower? Who knows… but either way, that’s all par for the course!

But there’s no doom and gloom where we’re heading! You have to remember that from an energy standpoint, the U.S. doesn’t look the same as it did in the summer of 2008.

Regardless of the comments of Janet Yellen, there’s an unstoppable shale trend cascading through North America. It’s big news, and big money for you.

Stable, cheap energy is what this country was built on — it’s also the reason we’ll continue to thrive today.

Plus, our ongoing thesis holds true: the main reason our economy isn’t falling flat on its face is due to America’s abundant natural resources. Lump all of North America together and we’ve got plenty of oil, gas, coal, uranium, gold and silver to go around.

Wealth is flowing from the soil here in the states. Which gets us back to the unstoppable nature of America’s shale boom!

Regardless of the outcome of the Fed’s ongoing exit — shale oil and gas are starting to make a positive difference for our country. Luckily you and I are on the front lines of this boom, and get to see some of the amazing turnaround stats associated with such a game-changing event.

Think about it, back in 2005 the U.S. was importing around 10 million barrels per day (bpd) of oil — a majority of which was coming from OPEC. Back then our exports of petroleum products were dismal, at their low a mere 844,000 bpd.

Today the tides have turned. We’re producing more than we’re importing and we imported closer to seven million bpd last year — of which OPEC was not the majority supplier. And U.S. oil exports are booming — just recently it was announced that they’ve hit a 15-year higher.

When you do the math, the U.S. is exporting over $74 billion in petroleum products per year. That’s more benefit than any Fed stimulus plan — and it’s all organic, free-market movement.

And remember, we’re in the early stages of America’s oil and gas boom. Without hard numbers in front of me only something like 8-10% of available oil is fracked from wells right now. That means that this boom has long legs. We’re not calling it the Next Age of Wealth for nothing.

This unstoppable trend will treat America and more importantly, you, very well.

Ed. Note: This essay was first featured in today’s Daily Reckoning email edition – along with a full analysis on the coming Iraq oil shock and its effect on gasoline prices. It’s just one of the many free perks of being subscriber to the DR. Sign up for FREE right here, and get a host of great benefits, including regular opportunities at real, actionable investment tips.