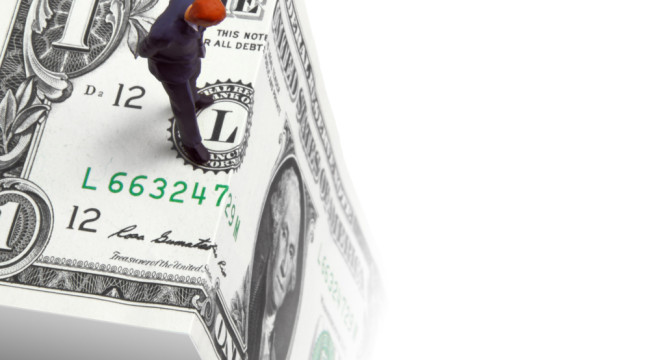 Look Out Below: The Real Economy Just Hit Stall Speed

What do we mean when we say the U.S. economy is at stall speed? Stall speed refers to the air speed and angle of the wing (called the angle of attack) needed to keep an aircraft aloft.

In layman’s terms, once an airplane’s speed drops to the point that cranking the wing angle up no longer provides enough lift, the airplane stalls out and starts an unintended (and often uncontrolled) descent.

The real U.S. economy (as opposed to the stock market) is at stall speed, and is about to crash into recession. The analogy (via longtime correspondent B.C.) is apt, as the economy is losing speed on multiple fronts.

B.C.’s chart is unique, in that it includes everyone’s favorite stimulus, huge federal deficits:trillions of dollars borrowed from our children and grandchildren to support bloated federal fiefdoms, favored cartels and various bread-and-circuses programs that placate the restive masses.

There are three parts to this chart. Let’s look at them one at a time. The red line is real final sales per capita, which means all sales in the economy adjusted for inflation divided by the population, i.e. per person.

This scrapes away some of the distortions built into gross domestic product (GDP), which is heavily gamed to provide the illusion of “growth.”

Note that real sales have reached lower highs and hit lower lows for the past three decades–they’ve now rolled over, which means the economy is slowing. 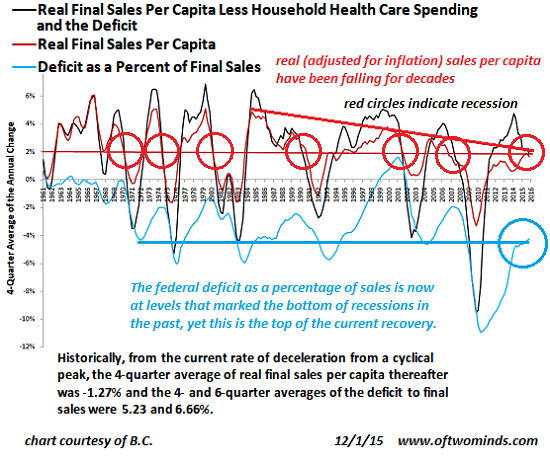 The black line is real sales minus the drag of healthcare and the borrowed-from-our- grandchildren federal deficit, which does not qualify as organic economic growth. Together, these two lines have a remarkably successful track record in predicting recessions, going back four decades.

Now they are once again dropping below the line-in-the-sand that signals recession. As for healthcare’s correlation to recession, please read The Coming Great Recession, Brought to You by the Healthcare Cartel (December 1, 2015).

The blue line is federal deficits as a percentage of real sales–a measure of how much of the real economy is debt-funded federal spending. To state the obvious: an economy that requires massive central-state deficit spending to keep from imploding is not a healthy economy. Rather, it’s a crony-capitalist Paradise on its way to history’s ash-heap of failed Elites and failed policies.

Note that now, at the very peak of the 7-year long “recovery,” this line is at levels that previously marked recessionary lows. This means federal deficit spending is at levels that were once considered “emergency stimulus spending” in the depths of recession.

But look out below, for even with bloated federal spending, the real economy has hit stall speed.