“The Fed’s remedies are likely to lead straight to the kind of depression the Fed set out to avoid in the first place.”

So warned Jim Rickards in his 2011 runaway best-seller, Currency Wars.

In fact, Jim argued the “new Depression” had already begun.

The official commentariat ridiculed Jim at the time.

After all, the economy had just recovered from a technical recession in 2009.

And it was in technical expansion by 2011, courtesy of the Fed’s heroic fling at the printing press.

But Jim maintained mainstream analysts failed to understand the meaning of “depression.”

They changed the goalposts in the 1960s.

Under the new rules, depressions were bugaboos of the past. Monetary “fine-tuning” and other modern refinements carried the day

But was Jim right all along?

Is the American economy locked in a depression… with no end in sight?

And is the U.S. now like Japan — down with a chronic wasting disease?

These are the questions we ponder this delightful spring afternoon…

John Maynard Keynes defined depression as a “chronic condition of subnormal activity for a considerable period without any marked tendency either toward recovery or toward complete collapse.”

Not year upon year of negative GDP. Or mass unemployment. Or soup lines or dust bowls…

But a “chronic condition of subnormal activity for a considerable period without any marked tendency either toward recovery or toward complete collapse.”

“That is the meaning of depression exactly as Keynes defined it,” says Jim.

“It is not negative growth,” Jim clarifies. “But it is below-trend growth.”

It’s also a record case of the blues…

Each year since 1930, the Bureau of Economic Analysis has calculated the change in inflation-adjusted (real) GDP.

The locust years of the Great Depression. 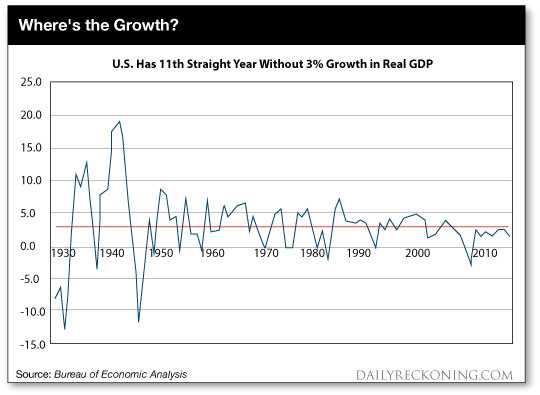 With the displeasure of repeating ourself…

And gunning hard for number 12…

The remaining three quarters will have to come in Bunyanesque for GDP to crack 3% on the year.

How did we come to this pass?

The Federal Reserve has taken its balance sheet from about $800 billion to $4.5 trillion since 2008.

So… why has the U.S. economy been so down in the mouth these 11 years?

And the money quote:

“The problem is we can’t do it by printing money.”

“The current economic slump is not cyclical,” Jim continues. “It’s structural. This is a new depression that will last indefinitely until structural changes are made to the economy.”

Jim says Japan’s been in a depression for 25 years because it hasn’t made the required structural changes to its economy.

Of a long, drizzle-flogged November…

Of a cold that never ends.

After 11 years of subtrend growth going on 12… can Trump jump-start the American growth machine?

Based on his first 100 days and the forces aligned against him… we can only say we’re unconvinced.

“It’s not always a smooth ride,” he says, but “we come through things.”

We sure hope he’s right.

And he is called the “Sage” of Omaha for a reason… right?…