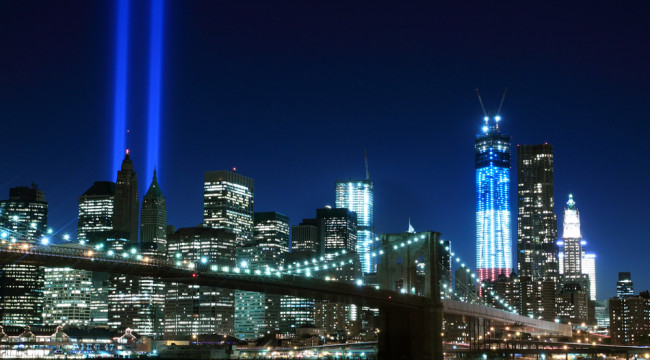 Life Is Uncertain and So Are Interest Rates

Friday was an emotional day for Americans. In an instant, on a beautiful blue sky morning 14 years ago, all of our lives changed forever.

September 11 is a day when we pause and reflect on where we were when—when the towers came crumbling down, when our nation’s capital came under attack, when so many lives were cut short, when so many heroes rushed in.

I was in Manhattan with colleagues that day, attending a financial industry conference uptown. At the time, we didn’t know how fortunate we were that our meeting had been changed from 9:00 a.m. to 11:00 a.m.

I was en route when everything stopped, and soon after, I saw all the people covered in dust and walking home across the bridge. The cell phones in the city stopped working, but because mine had a San Antonio area code, I was able to get through to the office to let everyone know we were safe.

I was there with two of my company executives and the magnificent Nancy Holmes (no relation, though she often joked that I was her adopted son), who was working with me as a marketing strategist, at the age of 82. 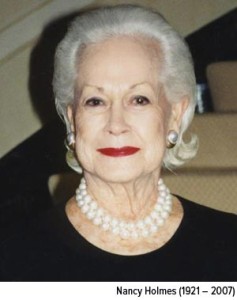 Nancy led one of the most interesting and full lives I have ever known. A code clerk for the U.S. Army, a model in Paris for Balmain, a photojournalist for Columbia Pictures, a bestselling author and magazine editor, including editor-at-large for Worth magazine, which she retired from to move to San Antonio and spend time with her granddaughters and be a consultant to U.S. Global.

In fact, she was larger than life and filled with enthusiasm for life. She was a fellow traveler of the world, but like the rest of us, in that dark hour we all just wanted to go home, to Texas.

The city was shut down that night. The cabs disappeared and the subways weren’t running. The airports would remain closed for many days.

But the next morning I found a driver to take us to New Jersey where I had reserved one of the last rental cars left in the area. The four of us loaded into a Ford Expedition and began the long ride home and an unforgettable bonding experience. My adrenaline rush enabled me to drive us straight through for 30 hours.

Early on we turned off the car radio because the nonstop coverage of the tragedy was too much to take. Instead, Nancy entertained us with stories of her incredible trail blazing life including her close friendships with the rich and famous, from Joan Collins and Elizabeth Taylor to Sean Connery and former hedge fund manager Julian Robertson. Nancy was a bright light on that dark day.

For the last 14 years on that day, I remember all the people who didn’t get to return home that fateful day, and I give thanks that I did, along with these special colleagues and friends.

I found myself back in New York on Friday, an unplanned diversion when my flight out of Portland, Maine was cancelled. And once again, I’m trying to get home. Rain has grounded the midsize regional plane I was scheduled to take, an effective reminder that no matter how well you think you’re in control, uncertainty has a habit of stepping in the way.

Will They or Won’t They?

Right now, a lot of investors are wondering about the uncertainty of rising interest rates—the causes, effects and possible ramifications. Many people have been saying for weeks and months now that a rate hike is imminent and that September is the anticipated takeoff.

I’ve been skeptical of this, and now a chart from highly-respected market analyst Jeff deGraaf confirms my skepticism. In his words, “the market anticipates >70 percent probability of the Fed NOT raising rates.” 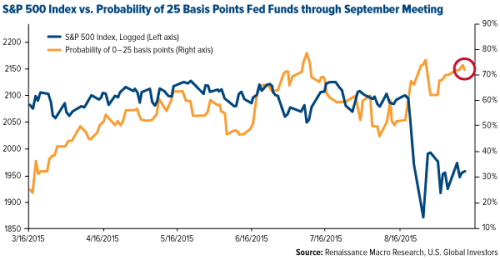 Indeed, if rates were allowed to stay where they are, the bond market could very well see a rally, which would be a boon for our Near-Term Tax Free Fund (NEARX). Another beneficiary would be dividend-paying stocks, such as those found in our All American Equity Fund (GBTFX).

Speaking of the S&P 500, many investors might worry that falling energy stocks are creating havoc for the index. In reality, the S&P isn’t affected by a drop in energy as much as some believe. Currently, energy is only 7 percent of the index, and its position is dropping. As recently as December 2014, it was 9 percent.

Part of the reason it’s falling is because the market cap for energy stocks has collectively declined 32 percent for the 12-month period. Do the math. The point is that, as the fourth-smallest sector in the S&P following telecommunications services (2.4 percent), materials (2.9 percent) and utilities (3 percent), energy has a minimal impact on the overall index.

Everyone knows that when energy prices drop, oil specifically, companies within the sector are hurt, including producers, refiners and the like. The winners are consumers, who save at the pump and benefit when companies pass along energy savings.

What many people might not know, however, is that it often takes a few quarters before these benefits are realized. Take the airline industry. Domestic carriers reported their first-ever $5-billion quarter in July, which is exactly a year after oil prices started to plummet from more than $90 per barrel.

The longer fuel prices stay low, the more likely it is that airlines will continue to perform beyond expectations. Irish low-cost carrier Ryanair, for instance, recently hit a 52-week high. If prices were to plunge to $20 per barrel, as Goldman Sachs claim is a possibility, the savings would be even larger.

However, with a growing global population over seven billion people, it will not be much longer before the oil supply at these prices tightens and prices rise to the $60-per-barrel level. This will have many benefits for both consumers as well as the energy space.

As always, investors should consider their tolerance level based on risk and age to help balance their investments between short-term bonds and equities.

Manufacturing and the Velocity of Money

Here’s a final thought I want to leave you with. According to new data released by the Bureau of Labor Statistics, government employees outnumber workers in the manufacturing sector 1.8 to 1—nearly double. What if it were the other way around? The economy would likely be stronger and more vibrant, as I see it.

Think of home construction. When a house is built, money touches so many people, from surveyors to architects, from plumbers to landscapers, from lawyers to accountants. All of these people are creating wealth for themselves and for others. For every dollar invested, housing returns between $12 and $14.

That’s not the case with government workers, for whom taxes must be raised to pay for their wellbeing. Don’t get me wrong. We need such people to run the government. But the ratio between the two types of workers is out-of-balance for a vibrant economy.

It’s classic macroeconomics on money supply growth and velocity. Different industries and sectors have different values for each dollar spent. The private sector is higher than the public sector, and housing is highest.

To my Jewish friends, L’shanah tovah! For a good year!

P.S. This article was originally posted at U.S. Global Investors.